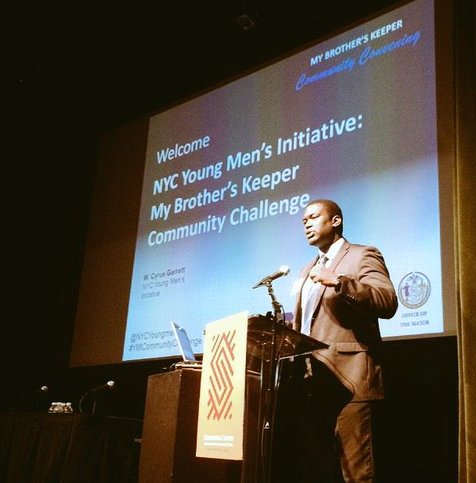 In August of 2011, then-Mayor Michael Bloomberg addressed a group of nonprofit and community leaders as he announced the launch of a landmark approach to tackling persistent problems facing young black and Latino men. The Young Men’s Initiative, Bloomberg said, would address “four areas where the disparities are greatest and the consequences most harmful: education, health, employment, and the justice system.”

Upon its 2011 launch, Bloomberg put together a steering committee that included major players from the administration, including then-Deputy Mayor Linda Gibbs; then-schools Chancellor Dennis Walcott; Veronica White, Director of the Center for Economic Opportunity at the time; and Andrea Batista Schlesinger, Gibb’s Director of Strategic Initiatives, who Bloomberg said was the driving force behind the initiative.

The program was initially funded by a combination of one-time $30 million contributions from Bloomberg Philanthropies and The Open Society Foundation and ongoing support from New York City tax dollars (up to $67.5 million over three years, Bloomberg said at the time). In his speech, Bloomberg said the purpose was that “‘equal opportunity’ is not an abstract notion – but an everyday reality, for all New Yorkers.”

That goal is, generally, the operating motivation for all of the administration of Mayor Bill de Blasio, Bloomberg’s successor. However, while de Blasio has supported the Young Men’s Initiative, the program is not exactly a central piece of de Blasio’s fight against inequality. On Wednesday, about five years after the launch of the Young Men’s Initiative, the City Council will hold an oversight hearing to examine the status of YMI and its effectiveness nearly three years into the de Blasio administration.

The Council’s Youth Services Committee, chaired by Council Member Mathieu Eugene of Brooklyn, will hear from Cyrus Garrett, the current executive director, and other YMI stakeholders, including those who have gone through its programming.

According to a status report conducted by the Urban Institute in January of this year, most stakeholders agreed that under Bloomberg, YMI’s approach to New York’s disparity in justice for young men of color was most successful. YMI 1.0, as the Urban Institute called its Bloomberg era form, ushered in policies like Close to Home, an initiative allowing juvenile offenders to stay close to their families while spending time in non-secure and limited-secure city facilities and ARCHES, a group mentoring program to help remove men aged 16-24 from the criminal justice system.

In 2013, when Bloomberg left office, YMI 1.0 had already presided over (or, at least, coincided with) several successes, according to the 2013 YMI annual report: juvenile crime was 30% lower in 2013 compared to 2012, and had dropped 18% since 2006; 40 high schools for black and Latino boys had received investments from the Expanded Success Initiative (a YMI offshoot that has since transitioned to the NYC Department of Education); after the introduction of Cure Violence, a program designed to treat violence as a public health issue by putting outreach workers on the ground, there was a 28% decrease in gun violence in the target neighborhoods of the South Bronx, South Jamaica, Crown Heights, East New York, and Central Harlem.

Interestingly, the 2013 report was co-authored by Richard Buery, who was then leading Children’s Aid Society, but would soon be named a deputy mayor under de Blasio and now oversees YMI.

Along with apparent progress, YMI 1.0 also had some structural problems. According to the Urban Institute, “there was widespread belief that YMI needed continuous input and consultancy with actors outside city government” and “community-based organizations, both large and small, did not have sufficient input into YMI processes and decisionmaking.”

At an event in 2015 inaugurating the launch of YMI 2.0 and Garrett's appointment, de Blasio outlined the trajectory going forward: “New York City is answering President Obama’s call and doubling down on its commitments to expanding literacy in our youngest children, ensuring our high school graduates are ready for college and career, and forging a deeper partnership between police and community to prevent crime.”

While YMI 2.0 remains committed to many of the successful programs under Bloomberg, it has since been reconfigured to focus on neighborhoods in the South Bronx, East Harlem, Southwest and Southeast Queens, the North Shore of Staten Island, Brownsville, and East New York. This likely reflects budgetary constraints: the seed money from Bloomberg and Soros has all been spent, as their $60 million was only allocated for the three years after the 2011 launch of YMI.

YMI has also begun to align itself with goals set forth in Obama’s My Brother’s Keeper Initiative, a nationwide program launched in 2014 that de Blasio referred to at the 2015 event and which the city officially partners with. According to Obama, his initiative focuses on “providing the support [young men of color] need to think more broadly about their future.” While My Brother’s Keeper has a much larger focus (and a corresponding $600 million budget), it’s genesis can be traced to the Young Men’s Initiative.

Alignment with My Brother’s Keeper has led to some adjustment in YMI’s vision. Under Bloomberg, YMI targeted men of color aged 16-24, but under de Blasio, programs are offered to different age groups. The “Talk to Your Baby” campaign and reading programs for children enrolled in kindergarten through third grade are both My Brother’s Keeper-united programs that clearly target a younger audience. While there are several goals of My Brother’s Keeper that also correspond with Bloomberg’s original 16-24 demographic, the Urban Institute recommended that the de Blasio administration define “what constitutes YMI-aligned programming and clearly communicating which programs count as YMI aligned.”

Other important new highlights of YMI 2.0 include improved relationships between the NYPD and young men of color -- a goal that was outlined in de Blasio’s 2015 launch with Garrett -- but one that lacks any evident policy behind it, though the city is rolling out its expanded neighborhood policing program.

In April, YMI released “The Disparity Report,” which “provides a snapshot of where young people of color stand in relation to their peers in the areas of Education, Economic Security and Mobility, Health and Wellbeing, and Community and Personal Safety.” Generally, the report shows that there have been “decreases in several disparities for young men and women of color,” but that “disparities persist, warranting an in-depth exploration of the underlying factors that account for these continued discrepancies.”

And on Monday, the de Blasio administration released the Mayor’s Management Report (MMR) for fiscal year 2016, which ended June 30. The Young Men’s Initiative section of the report shows that it is partnering with about 20 city agencies and offices, mentions its increasing alignment with My Brother’s Keeper, and says that “In Fiscal 2016, YMI implemented new programs and refined existing ones; developed trackable indicators and metrics; and launched a policy committee to further advance New York City’s capacity to promote the advancement of [boys and young men of color].”

Council Member Eugene’s office confirmed that at Wednesday’s hearing his committee will be looking for new information from YMI about its programs and their effectiveness, what its budgetary needs might be, and more.

When the City Council examines the Young Men’s Initiative Wednesday, a project spearheaded by the Council Speaker, Melissa Mark-Viverito, could also come up. The Young Women’s Initiative, launched by Mark-Viverito in October 2015, targets gaps in services for young women aged 12-24. Similar to YMI, YWI focuses on structural inequality facing women of color, with a spotlight on health, education, economic and workforce development, criminal justice, and self-sufficiency and mobility.