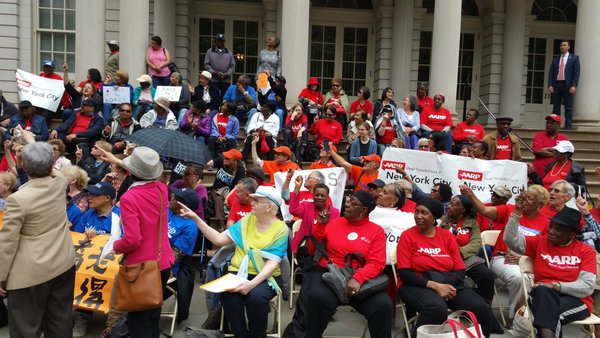 A June City Council report on the budget for the city Department for the Aging (DFTA) detailed that there are approximately 1,400 seniors on waiting lists for case management services. The average age of these seniors is “85+,” with an average income of “$12,000-$20,000,” according to LiveOn, a senior advocacy organization. The City Council report examined the adopted budget for the new fiscal year, which began July 1, and makes clear that DFTA is not being funded with a sense of urgency to quickly reduce waitlists and serve the city’s oldest, often neediest residents.

The Department for the Aging uses federal, state, and city funds to provide advocacy, education, and services that range from hot meals at senior centers to transportation and legal aid. DFTA provides case management services for those not covered by Medicaid; those waitlisted are without access to trained employees of city-contracted nonprofits that evaluate seniors’ needs and coordinate appropriate care.

Seniors are one of the city’s fastest growing demographics: in a July press release announcing an “‘Aging in Place’ guide to help older New Yorkers,” Department for the Aging Commissioner Donna Corrado reported that there were 1.4 million adults over the age of 60 living in New York City, with an expected 2 million by 2040. Ninety-six percent of this group chooses to stay in their apartments over relocation as they age and need more attention. "So many seniors are held captive in their homes because of a lack of accessibility," Corrado said. Often, this accessibility takes the form of physical frailty, disability, chronic illness and disease.

DFTA reaches homebound seniors through case management services. Part of the state-funded Expanded In-Home Services for the Elderly, case management provides seniors ineligible for Medicaid, with counseling, advocacy, referrals, and information. The service is made possible through referrals to local senior centers and community-based social service and healthcare agencies.

Case management is also an entry point to homecare services, which include medical assessments and referrals and information to ensure appropriate care. Seniors are unable to receive homecare services without access to a case manager. In its May report, the City Council reported a homecare waitlist of 500-550.

The case management problem stems in part from high turnover among case managers, fueled by low salaries. The same LiveOn report claims an average annual turnover rate of 32%, with seven nonprofit agencies reporting over 40%, and each with 100 to 300-plus waitlisted seniors, as of February.

The administration of Mayor Bill de Blasio has also declined to provide funding to address other causes of the waitlist, independent of salary woes. The June City Council report showed that $1.8 million was baselined to strengthen existing services, short of the $3 million allocated in fiscal year 2016. The $3 million would have, at a very minimum, allowed DFTA to maintain its then-level of service. Bobbie Sackman, director of public policy at LiveOn, told Gotham Gazette that the city’s Office of Management and Budget (OMB) told LiveOn that the $1.2 million difference has been added since. Sackman could not confirm this information and an inquiry from Gotham Gazette to a budget spokesperson in the mayor’s press office was not returned by publication.

"We still have a way to go to restore aging funding to pre-recessionary levels," City Council Member Margaret Chin, chair of the Council's Committee On Aging, said in the Council report.

Chin refers to the heavy budget cuts that took place under former Mayor Michael Bloomberg's tenure. Taking action to address the fallout of the Great Recession, Bloomberg oversaw a $30 million reduction in the DFTA budget, according to a 2010 WNYC report. DFTA was left with a $264 million budget, far short of the current $330 million adopted agency budget for the new fiscal year, and a sliver of the city's $82 billion in expenses.

"Seniors should not be on any waiting list,” Chin said in an interview. “Our senior population is growing tremendously, so as the numbers grow, the needs grow also…by 2030, one in five is going to be a senior, so we have to make sure the budget reflects that."

Chin was critical of the lack of salary parity between case managers and comparable government positions. "If other agencies are paying a higher salary for the same type of job, it's very hard for the agency that has these case managers to compete, so there's a lot of turnover, and we don't want that to happen," Chin said. "We have to make sure there are enough case managers.”

Sackman of LiveOn lamented that "There is no plan.” “The fastest-growing segment of the city's population, and there is no plan," she said. Sackman offered a potential explanation: "I think some of it is because you can't get any more invisible than being a homebound 85-year-old person."

"There's not enough money,” Sackman concluded after discussing the problems facing the city’s older population and the city government response. No one from DFTA was made available for comment for this story.

One key issue, Sackman noted, is that case management services are for seniors above the Medicaid level. "So, no one's running to the bank," she said. "If you're eligible for Medicaid, it's an entitlement, and you get a pretty broad array of services…if you're not eligible you're really out in the cold a lot."

The same is true for homecare services. "If you are on Medicaid, you can get 10 hours a day of homecare, and while it's more difficult, you could still get 24 hours care. On the EISEP (Expanded In-Home Services for the Elderly), it's not an entitlement, you might get one to 12 hours a week," said Sackman. "Remember, to get homecare you've got to be assessed by a case manager. They are the gatekeepers. So if you're sitting on a waiting list, you can't get home services. It's a vicious cycle."

Both and Sackman and Chin were quick to highlight that the waitlist issue also impacts family members and loved ones already acting as unpaid adult caregivers. "They are struggling day-to-day, figuring out how to juggle work and other responsibilities in life while taking care of their elderly parents," Sackman said. "They just don't have a system in place to help them."

"All seniors are needy, regardless of their needs," Myers said in an interview. She emphasized the relevance of senior issues. "We want to have good people in the field who will be caring for all of us when we age."

Selfhelp was founded in 1936 to serve those fleeing Nazi persecution. After World War II, the organization began serving survivors as well, providing them with job training, resettlement, and case management, among other services. As the refugees and survivors continued to age, Selfhelp evolved into a senior-focused organization to help vulnerable populations "age with independence and dignity."

Today, Selfhelp serves 20,000 seniors at 27 across four boroughs and Nassau County. This includes five senior centers and four Naturally Occurring Retirement Communities (NORCS). A number of sites are located in Queens, many of which serve the Chinese community, as well as Korean, Latino, and other immigrant populations. Selfhelp emphasizes hiring culturally sensitive staff, including employees fluent in Russian for the 25% of clients who are WWII survivors. These professionals are well-versed in relevant topics of interest, like Soviet Union reparations, for one.

Myers views the case management dilemma through a humanitarian lens. "For some of our clients, their interaction with the case manager is really one of their only interactions, if not the only interaction,” she said. "When you have people who are constantly leaving, the quality of service suffers, as well as the client-worker relationship…there is obviously a lag between the time that someone leaves and when we are able to bring in someone new to train them." Myers noted that this turnover time is often two to four months, or more.

Above all, Myers classified case managers as an invaluable safety net. She told a story of a 102-year-old client who one day didn't answer the door for her meal delivery. The service provider contacted Selfhelp, who proceeded to call her house, to no avail. Selfhelp alerted case management staff, who went to her apartment, opened up her door with another key, and found the woman lying on the floor, unable to move. "It's probably not an exaggeration to say that we saved her life," Myers remarked.

Mayor de Blasio often talks about budgets as indicators of values and about the need for government to treat its most vulnerable citizens well. It is especially difficult to advocate for senior services funding and reform, Sackman said, because "it's not the sexiest issue." Told she was the second person to use those exact words, Sackman laughed and said, "Well, it's true. Except, if you're in my world, it's very sexy."