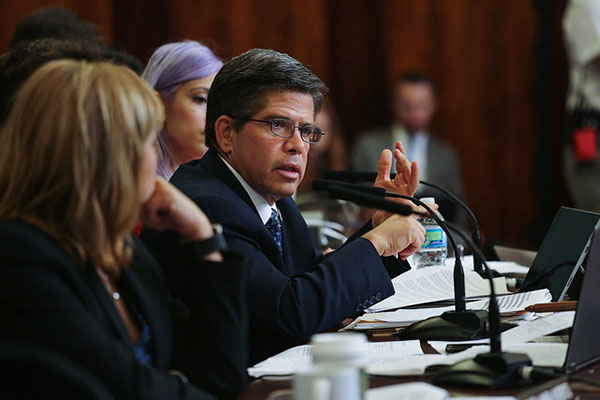 Who knew what when? How sound is the chain of command at City Hall? Are top de Blasio officials’ decisions clearly communicated to agency commissioners? Was a former commissioner asked to leave her position? How much influence did a powerful city labor union wield in the decisions around the removal of deed restrictions on Rivington House, the Lower East Side nursing home facility that is set to become luxury condominiums?

Why hasn’t anyone been held accountable for what the administration has admitted was a major mistake?

These are some of the questions that came up at a City Council oversight hearing on the set of Rivington transactions that has become a black eye for the administration of Mayor Bill de Blasio. Some of them - and many others - were answered to varying degrees of clarity, though some remain largely unanswered despite the six-hour hearing on Thursday at City Hall during which several top de Blasio officials testified.

In a sometimes contentious interrogation of administration officials, City Council members went over the nitty-gritty details of the deed changes at Rivington House, which was flipped by its short-term owner for a significant profit after a series of miscommunications among city officials and a few still mysterious conversations.

At the hearing, First Deputy Mayor Tony Shorris was the first to testify, before Corporation Counsel Zachary Carter, and Lisette Camilo, commissioner of the Department of Citywide Administrative Services. Shorris took complete responsibility for the missteps that allowed DCAS to lift the deed restriction at Rivington, despite admitting that communication failures occurred at multiple occasions and by multiple parties. He said he had informed his top aides that only one of two deed restrictions on Rivington should be lifted, so that it would remain a healthcare facility, but that the decision was not communicated to the DCAS commissioner at the time, Stacey Cumberbatch.

Questions about communications, timelines, procedures, and policy were asked and answered. But while some of those responses were clear and unquestionable, some doubt remained about the administration’s efforts in lifting the deed restriction and its response after the controversial transaction came to light. Six of the top questions that remain incompletely answered:

In his opening testimony, Shorris said he was informed by DCAS Commissioner Camilo in late February this year that Rivington House had been sold to a real estate developer. His immediate priority, he said, was to report the deal to the Department of Investigation. He directed Camilo to contact DOI, which she did, and also placed a call himself to DOI Commissioner Mark Peters. Of that time, Shorris said, “I spent the next few days trying to understand what transpired and then I informed the Mayor as news accounts were beginning to run -- the first time he heard anything about the matter.”

As per DOI’s report, Camilo requested the inquiry on March 1. The first big news report about Rivington came out March 22, when the Wall Street Journal revealed that Comptroller Scott Stringer was looking into the deed restriction removal. The mayor also insisted at a press conference on March 28 that he had only heard about Rivington “when it became public.”

City Hall has attempted to downplay this gap between when Shorris found out what had happened and spent a few days gathering information and de Blasio saying he only found out through news reports weeks later. De Blasio spokesperson Eric Phillips told the New York Post on Thursday, “The First Deputy Mayor has said all along that he informed the mayor in tandem with the mayor’s reading of the late-March news reports. That’s a fact. Today, Mr. Shorris remembered that time period being a few days after he called on DOI to investigate the matter, when in reality it was a couple of weeks.”

Did Shorris clearly say to his staff that he wanted Rivington to remain a healthcare facility?

Shorris met with a number of top administration officials -- including Commissioner of Housing Preservation and Development Vicki Been, Human Resources Administration Commissioner Steven Banks, Deputy Mayor Alicia Glen -- who presented him with various options for Rivington House, including converting it to affordable housing. Shorris, however, preferred that it remain a health care facility.

This decision, he told the City Council, was not directly communicated to other top officials. Rather, Shorris said he told his own staff and assumed that they would then have passed his instructions along, though he could provide no proof of the meeting where the decision was taken or explain why they failed to clearly inform DCAS of his decision. The two staff members who Shorris said would have known of his decision were Dom Williams, his chief of staff, and Sarah Samis, a senior policy advisor.

Has the communication and decision-making process under Shorris been changed?

Although Shorris conceded that on Rivington his decisions were not adequately relayed and that there were gaps in communication between him and other top officials, he offered little in the way of fixes that have been made in that regard. He staunchly defended the administration’s record and insisted that Rivington was an “episodic” failure that would be prevented by an overhaul of DCAS’ process for deed restrictions. He insisted that he could not personally follow up on the innumerable decisions he makes each day considering his portfolio of about 30 city agencies and his coordinating role over people who supervise the city’s 350,000 employees. Shorris wouldn’t say, when asked by Council Member Ben Kallos, whether he would offload any of the city agencies he personally oversees.

“Overall, I would’ve liked to hear some management plan that would address the lack of communications that resulted in this outcome,” said Council Member Vincent Gentile, in a Friday phone interview with Gotham Gazette. Gentile chairs the Council’s Oversight and Investigations committee which held the joint hearing with the Committee on Governmental Operations chaired by Kallos.

Gentile said it was “still hard to fathom” that Shorris was unaware of the Rivington controversy till February 2016, since just two months earlier, the community was up in arms about the deal and Manhattan Borough President Gale Brewer and the local Council member, Margaret Chin, had publicly raised the issue. “That’s a bit incredulous for me to accept,” Gentile said.

For Gentile, the problems of Rivington go beyond deed restrictions and speak to issues in how the administration determines policy. “I was hoping to get more discussion on who’s responsible in determining what is in the best interest of the city,” he said, referring to the city’s failure to gauge the best use of Rivington.

Why doesn’t Shorris or his staff review weekly agency memos?

In his first few months on the job, Shorris reviewed weekly memos from city agencies to monitor implementation of the administration’s policies. In the investigations into Rivington, it emerged that memos that included information about the deed restriction removal had been sent to Shorris but he had failed to read them. After getting a better feel for city agencies, their leaders, and their machinations, Shorris said, he felt less need to read the memos he continued to require, moving to a more episodic review.

Even in hindsight, he said, those memos would not have set off alarms for him since they did not overtly say that Rivington would become luxury housing and that the transaction would have likely gone through.

Shorris continues to receive these memos from agencies and said that he reviews “some of them from time to time” and that his staff reviews them as well, but they are progress updates rather than decision memos. He did not say whether he had put in a system in place to ensure a more thorough review of these memos or a clear way in which agency commissioners should flag essential items. He expects calls or emails in such cases, he said.

Why did former DCAS Commissioner Stacey Cumberbatch sign off on Rivington and why exactly did she leave DCAS?

One of the key decision makers in the Rivington deal was Cumberbatch, former head of DCAS. Cumberbatch left her position at DCAS in December 2015 and took a position at the city’s municipal health care system, New York City Health + Hospitals. She has since retired. The offices of the Attorney General and the U.S. Attorney for the Southern District of New York, which are both still investigating Rivington, asked the Council to only call current city employees to testify, which precluded Cumberbatch.

This meant that a number of questions that likely could only have been answered by Cumberbatch were instead posed to her successor, Lisette Camilo. There was little explanation for why Cumberbatch signed off on the Rivington deal or about the communication between her staff and Shorris’ people.

Also unclear is the process by which Cumberbatch left DCAS. Shorris said on Thursday that he had to sign off on her departure and move to Health + Hospitals, and that he did so when Cumberbatch presented the opportunity to him. As he was pressed by Council members, he made a clear effort to only repeat that line, rather than answer whether he had encouraged her to look elsewhere first.

Why was there no communication with Council Member Margaret Chin and Borough President Gale Brewer?

“All of us were shocked,” Chin told Gotham Gazette on Friday, looking back at when it emerged that Rivington was to be sold to a luxury housing developer. Chin and Brewer had fought for Rivington, which was going bankrupt under nursing home provider VillageCare, to remain a nursing home and had celebrated when it was taken over by another provider, the Allure Group.

“We didn’t even know there was a hearing,” she said, referring to a public hearing before the sale which was advertised by DCAS for one day only, without naming Rivington and with the wrong address. When asked if she got the answers to these questions from the administration, Chin said, “No. It turns out, they didn’t know either.”

Now she’s waiting for the next steps forward. “There are still unanswered questions about Rivington as well as the new facility,” she said. The de Blasio administration has put forward plans for a new senior affordable housing and health care facility in the community, which will be paid for in part by the $16 million the city received for lifting the Rivington deed restrictions. But Chin also hasn’t given up on Rivington and said the administration should use all its energy and options to get the property back, including eminent domain if need be.

Chin also wants to know what role state authorities had to play, since they are in charge of regulating Medicare and nursing homes, and who will be held responsible and how, once all investigations are complete. “What changes are going to happen internally, that’s something they should communicate to the public and to all of us,” she said.