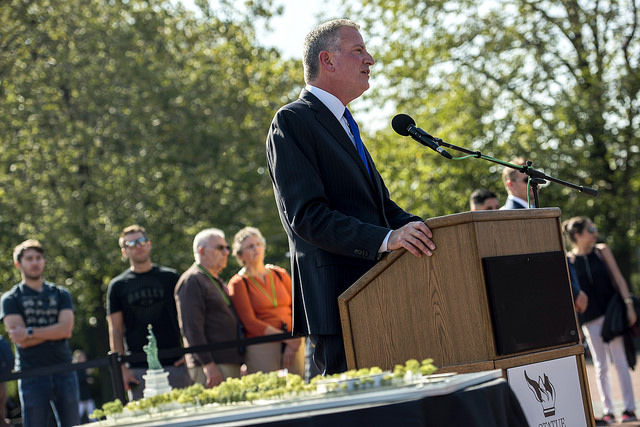 With the impending departure of the head of the city’s campaign finance regulatory body, good government advocates say Mayor Bill de Blasio must be careful about who he chooses to fill the position as the city heads into an election year.

“The chair of the campaign finance board is probably the single most important player in government ethics,” said Gene Russianoff, senior attorney at the New York Public Interest Research Group, a government reform organization.

Last week, the Wall Street Journal reported that Rose Gill Hearn, chair of the New York City Campaign Finance Board, will be stepping down at the end of the year. Hearn is resigning, she indicated, due to an increasing burden from her position as a principal at Bloomberg Associates, a consulting firm. “My increasingly heavy work schedule no longer permits me to devote the time warranted for the important activities of the board,” Gill Hearn said in a public statement.

Gill Hearn informed the mayor of her resignation in a letter on September 23, to give him “ample time to find a replacement and ensure a smooth transition.” According to the City Charter, the mayor is to appoint the CFB chair with the advice of the City Council Speaker. There are four other members of the board, and about 100 CFB employees who make the agency run. The board makes determinations on public funds payments and campaign violations, considers changes to the campaign finance rules, and otherwise oversees the work of the agency, which includes monitoring and auditing electoral campaigns.

“I believe that the Campaign Finance Board and staff will continue in the long tradition of nonpartisanship and independence that has always been a part of the institution,” Gill Hearn said in a statement to Gotham Gazette. Her resignation comes at a crucial time for both the mayor and for the city at large as every city elected official is on the ballot in municipal elections set for Fall 2017.

For de Blasio, appointing a new chair is delicate and potentially fraught territory as he is embroiled in multiple investigations at the state and federal level into fundraising activities -- though mostly ones that don’t concern the CFB system. Neither de Blasio nor his allies have been charged with any crime, and the mayor insists that they will be vindicated.

While it’s not yet clear if the mayor or his associates broke any laws, de Blasio’s own re-election campaign will continue to be the subject of CFB scrutiny -- in fact, the mayor’s campaign recently had a matter before the CFB related to the funds raised by a political nonprofit, The Campaign for One New York, that is affiliated with de Blasio, formed to promote his agenda, and a key piece of multiple law enforcement investigations.

In July, the board chastised de Blasio for exploiting loopholes in the city’s campaign finance law and undermining a system that is held up as a national model. The mayor and his nonprofit were let off with a slap on the wrist, but the board insisted that they did not consider the matter closed. The next CFB chair will be responsible for overseeing any further investigations should they arise. The Campaign for One New York is in the process of shutting down, something announced in advance of the CFB hearing.

Such a case is one example, albeit an especially high-profile one, of the type of issues brought before the campaign finance board. Meanwhile, employees at the CFB help educate candidates and campaigns about the city’s public matching system, vet campaign donations, and disburse public matching funds.

“[Mayor de Blasio] has to pick somebody of impeccable ethical credentials,” said Russianoff of NYPIRG about replacing Gill Hearn. “There’s no reason to believe he won’t do it.” Russianoff added that the scandals the mayor is currently facing “are putting extra pressure on the administration to do the right thing.”

Only three people other than Gill Hearn have served as chair since the board was created in 1988. The first chair was Father Joseph O’Hare, a Jesuit priest and former editor in chief of America magazine. O’Hare became president of Fordham University in 1984 and later served on Mayor Ed Koch’s Committee on Appointments and the Charter Revision Commission. O’Hare was reappointed twice and led the CFB until 2003.

O’Hare was followed by Frederick A.O Schwarz, Jr., who was corporation counsel for Mayor Koch between 1982 and 1986. In 1989, he chaired the Charter Revision Commission. He was CFB chair for one term. In 2008, Mayor Michael Bloomberg appointed Joseph Parkes, who was already a member of the CFB, to succeed Schwarz, Jr. as chair. Parkes has been president of Cristo Rey New York High School in East Harlem since 2004 and also previously served as president of Fordham Preparatory School.

The search for the next chair has not yet begun. Mayoral spokesperson Freddi Goldstein said in a statement, “As is standard practice mandated by the Campaign Finance Board, Mayor de Blasio and Speaker Mark-Viverito will work together to review potential candidates and appoint the person best suited for the job.”

Eric Koch, spokesperson for Speaker Melissa Mark-Viverito, said in an email on Monday that the speaker was awaiting a consultation with the mayor.

After Gill Hearn’s resignation is effective, the mayor will have 90 days to appoint a new chair. (The deadline, usually 180 days, is shorter because of the proximity to the next election.) If he should fail to do so, the remaining members of the board can choose someone to replace Gill Hearn.

“In spite of Chairperson Hearn’s solid leadership over the last three years, this could not come at a worse time,” said Dick Dadey, executive director of Citizens Union, a government reform group, “because it is the fourth quarter of the four-year city election cycle, with the major officeholders up for reelection.”

Dadey said the mayor should pick someone who will be “applauded uniformly” for their integrity. “We cannot afford to have someone in this position who is seen as a political or partisan figure because the integrity of the campaign finance program going forward really depends on the kind of people who run this program,” he said.

Although Dadey said he did not doubt the mayor would choose the right person for the job, he said the appointment would regardless be closely scrutinized because of the investigations the mayor faces. “[The mayor] has a higher bar now to select the kind of person that will be beyond dispute,” he said.

City Council Member Ben Kallos, chair of the council’s Committee on Governmental Operations, which oversees the CFB, said in a statement last week that he hoped to see a “a thorough and open search for a new chair who will be independent, non-partisan, and non-political” in their role.

“It is of supreme importance that the next chair be someone who has the stature and integrity to not only stand up to candidates and any elected officials but guide the board through election years independently,” Kallos said.

Notably, de Blasio was faced with a somewhat similar choice when selecting a chair for a mandated commission to study and reccomend compensation levels for the city's elected officials. De Blasio chose Schwarz, Jr. in what was a universally applauded decision.

The bills have been heard once since they were introduced in November 2015 and incorporate many of the recommendations made by the CFB in it’s 2013 post-election report. (Some of those recommendations have already been codified into law.) “De Blasio’s people should do what they can to get those immediate reforms through,” said Russianoff, warning that time is running out before the 2017 elections. “The worst thing that can happen is nothing happens.”

The most significant of the bills would limit the impact that can be made by people who have business before the city and bundle donations for a candidate. Mark-Viverito recently told Gotham Gazette that the bills are going through the normal legislative process but did not explain why they have not moved.

Additionally, the CFB itself is currently mulling over a raft of rules proposals that would tighten and clarify provisions of the campaign finance law to make it easier for candidates to run their campaigns and harder for outside groups to coordinate expenditures with candidates, among other changes.