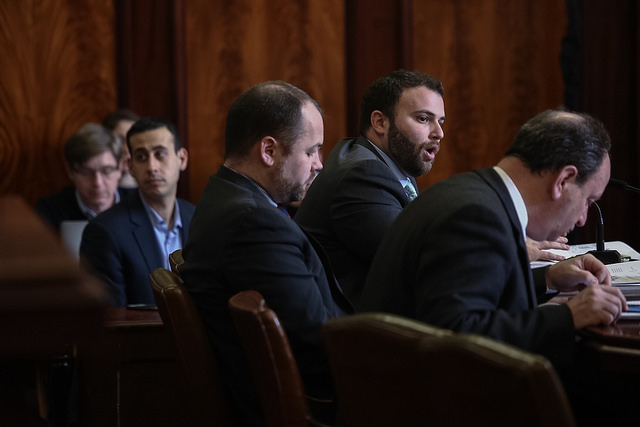 The dysfunction that has seemed to define the New York City Board of Elections this year was again on display Tuesday when its executive director first declined to testify at an imminent City Council oversight hearing and within hours reversed that decision.

With just two weeks to go before the November 8 general election, the City Council’s Committee on Governmental Operations scheduled an oversight hearing for Wednesday to gauge the BOE’s preparedness -- something typical of all election cycles. After the board’s abysmal management of voter rolls ahead of the April presidential primary in New York, it was already under pressure to ensure that the general election goes smoothly. Then, the board got pulled into controversy after the recent release of a secretly-recorded video that showed Democratic Manhattan election commissioner Alan Schulkin alleging widespread voter fraud in the city facilitated in part, he said, by the municipal identification program, IDNYC, which has nothing to do with voting.

Following the release of the video, City Council members have been rearing to grill the BOE for answers and it seemed for a few hours on Tuesday that they would be left disappointed. Council Member Joe Borelli, a Staten Island Republican and government operations committee member, had written to the committee’s chair, Council Member Ben Kallos, calling for a hearing on Schulkin’s claims. Kallos, Manhattan Democrat, pointed out that the BOE would be in for a pre-election oversight hearing as usual, and mostly dismissed claims of voter fraud. In the meantime, Mayor Bill de Blasio called for Schilkin to resign and said there is no evidence of voter fraud. Schulkin walked back his claims, somewhat, and said he had no intentions of resigning.

On Tuesday afternoon, Borelli tweeted out the image of a letter in which BOE executive director Michael Ryan declined to testify before the committee.

“Given the timing of the hearing, the notice date and the proximity to the election, unfortunately, it is not possible to cease election day preparations to prepare testimony and appear before the council,” Ryan wrote. The letter pointed out that BOE was given short notice of the hearing, being informed by email on Monday. Ryan also requested that the committee push the hearing to a date after the general election, “preferably after the anticipated election certification date,” which is expected to be November 22.

By 5 p.m., however, Borelli was told by City Council central staff that the BOE had agreed to appear before the committee for its pre-election check-in, as scheduled: Wednesday at 10 a.m. at City Hall.

A BOE spokesperson did not respond to a request for comment and there is no explanation for the flip-flop. “I don’t know if they’re afraid I have some smoking gun, which I don’t,” Borelli told Gotham Gazette when reached by phone. “I just want to know why the commissioner would say those things.”

Borelli pointed out that the hearing has been on the Council’s public calendar for at least a week, but conceded that the BOE may have been given little notice. “I give them the benefit of the doubt,” he said, “because at the end of the day, they agreed to come.” At the hearing, he intends to question the nature of Schulkin’s comments, whether they were true and deserve to be investigated, or whether they were false and warrant Schulkin’s resignation. Council Member Kallos was not available for comment on Tuesday, but will chair Wednesday’s hearing.

Notably, the BOE also cancelled its own weekly meeting that was scheduled for Tuesday afternoon. When reached by phone, a spokesperson did not give a reason except to say that the executive committee had made the decision and that the board would meet as scheduled next week on November 1.