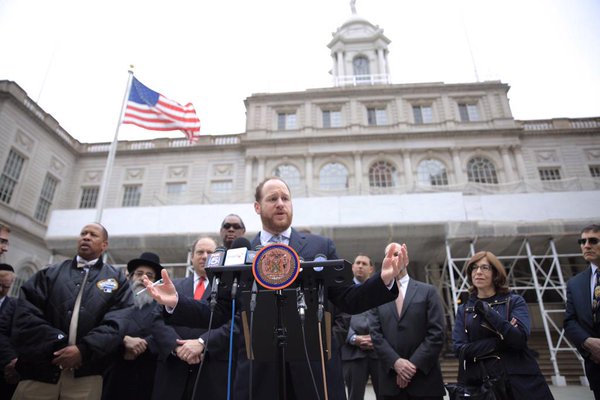 The bundling of campaign contributions by elected officials for fellow candidates in New York City is not new or illegal, but it raises questions about an unexplored area of campaign finance law, especially as the City considers updates to the rules of its heralded campaign finance system.

In New York City electoral campaigns, individuals often lump together contributions from multiple donors to show their support for a single candidate. These bundlers, or intermediaries, as they are termed by the Campaign Finance Board, are monitored to ensure that they comply with the strict disclosure requirements. The act of bundling itself is recognized as a method of potential influence or a means to curry favor with a candidate. It’s not surprising to see real estate developers and lobbyists in the CFB’s bundler database.

Included among the bundlers, though, are even elected officials themselves. City Council members and members of the State Assembly have, in the past and in the current election cycle, bundled donations, throwing up questions about the city’s campaign finance framework that haven't been dealt with in the past.

Council members can bundle donations from others, donate their own personal money, or donate from their campaign accounts to other city campaigns. Members use these tactics to support current or potential colleagues, at times in apparent interest of advancing their prospects for the prized position of being elected Speaker of the City Council by fellow members.

For the still-young 2017 election cycle, two City Council Members have bundled contributions for other members and candidates. Brooklyn Council Member David Greenfield has collected $16,250 in total for four other candidates, all of whom are currently members of the City Council -- Karen Koslowitz, Mark Levine, Julissa Ferreras-Copeland, and Dan Garodnick. Garodnick is term-limited next year, but has raised money, it seems, for a potential future run for another position. Council Member Corey Johnson has also bundled nearly $15,000 for Carlina Rivera, legislative director to term-limited Council Member Rosie Mendez. Rivera is running for the seat Mendez will vacate, which neighbors Johnson’s seat in Manhattan.

“Councilman Greenfield is proud to support outstanding colleagues in government and believes it's appropriate to do so in the most transparent manner,” said Stephen Snowder, Greenfield’s communications director, in an email. Council Member Johnson was not made available for comment.

Greenfield and Johnson’s bundling is not novel. In the 2013 cycle, a number of elected officials were bundlers, although the practice is not widespread. For instance, in the last cycle Garodnick bundled $7,250 for Scott Stringer’s campaign for Comptroller and $1,500 for City Council Member Andrew Cohen’s campaign; then-State Assembly Member (now Congresswoman) Grace Meng bundled $4,000 for then-Comptroller John Liu’s mayoral campaign; there were other smaller bundles for as little as $75 for a candidate. In the 2009 elections, then-City Council Member (now State Senator) Simcha Felder was a prolific bundler, raising as much as $30,000 for six City Council candidates.

(CFB records show Greenfield has bundled before, when he was head of the Sephardic Community Federation, a few years before joining the City Council in 2010.)

The city’s campaign finance rules don’t cover the scenario of elected officials bundling funds for candidates; it is perfectly permissable. A CFB spokesperson declined comment but said the agency would consider the issue.

City Council Member Ben Kallos, chair of the Committee on Governmental Operations, was unsure of where bundling by elected officials would potentially fall in the city’s legal or ethical statutes. “It’s an area we haven’t legislated or really dug into,” he told Gotham Gazette. “Ultimately I think what’s most important is that people are able to see who is bundling, for whom, how much, and are able to see the influence that might come from that.” Legislation related to campaign finance falls under the purview of Kallos’ committee.

There is currently a package of eight such bills under consideration, including one that would prevent contributions bundled by those who do business with the city from being matched with public funds -- though it is unclear if City Council members or other city electeds would be classified as "doing business" entities. “I think that anytime there’s bundling, regardless of who it is, we don’t want to match that with public dollars,” said Kallos, who also indicated that those bills, which have been dormant for some time, might soon be voted upon by the committee, which would pave the way for a full Council vote and movement into law -- perhaps in time for the 2017 election cycle.

When asked if elected official bundling might be an area that needs to be examined from an ethical standpoint, Kallos responded, “I’ve been pretty cautious with my campaign account and I’ve always been concerned with how campaign accounts are used. On the state level they’re used for criminal defense, they’ve been used to pay for personal items, for personal trips, for vehicles. Ultimately I believe that campaign contributions and campaign funds should be used for electoral purposes.”

From a good government perspective, while the practice is legal, it is questionable. “While I may find it somewhat problematic that they are currying favor with colleagues and/or other elected officials by becoming a bundler, there’s nothing inherently illegal or wrong about it,” said Dick Dadey, executive director of Citizens Union, a government reform group. “That elected officials are doing this now seems a bit unseemly because it’s really about amassing power in front of another elected official,” he added.

Council members eyeing the speakership of the City Council do use campaign funds to contribute to other candidates, as well as bundle for current or prospective colleagues. The City Council Speaker is elected by his or her fellow Council members. Council Members Levine, Ferreras-Copeland, and Johnson are all being discussed, among others, as candidates to be the next Speaker, which will be decided in January 2018, after the 2017 elections. It is unclear if Greenfield has his eyes on the speakership, though he is already a power broker in the Council as chair of the land use committee.

Dadey said it may be a simple show of support among colleagues in government and politics, and that they shouldn’t necessarily be treated any differently than private citizens. “In regulating this business, we have to be careful not to overregulate and solve a problem that may not necessarily exist,” he said. “This is an example where we’re assuming improper motives when there may not be any.”

But, Dadey does worry about the use of bundling to “curry favor” for a speakership bid. “I would like to think that the Speaker is going to be chosen not on the basis of who has raised the most money but who has the capacity, the talents and the insight to do it.

“No one raises money for a candidate for office without some understanding that they will be there when the fund-raiser needs them,” Dadey said.

Note: this article has been updated to clarify some of the language around bundling and to remove reference to Anthony Weiner, whose inclusion was related to a time before his scandals of the past several years, which nonetheless color any mention of the former Congressman.