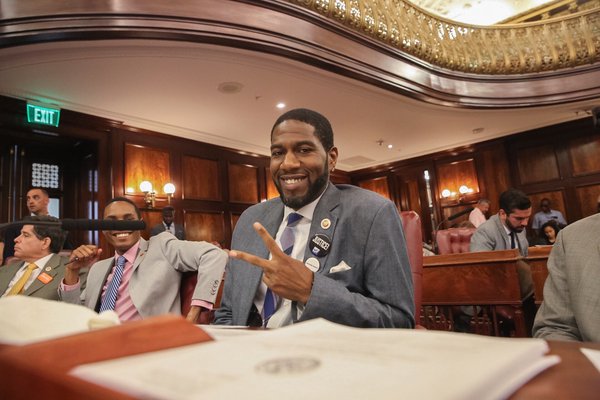 City Council Member Jumaane Williams, whose sit-down protest during the pledge of allegiance at the Council’s stated meetings has created waves and elicited both support and criticism, said on Wednesday that he plans to again stand once Mayor de Blasio commits to an agenda for jobs for city youth.

On the sidelines of a rally by police reform advocates outside City Hall, Williams said he intends to continue sitting out the pledge of allegiance at the biweekly meetings of the full Council. “I do intend to continue,” he told Gotham Gazette, thanking his colleagues for the support they have shown him. At last week’s stated meeting on Thursday, most of the City Council, including Speaker Melissa Mark-Viverito, continued to stand after the pledge and then sang a verse of “Lift Every Voice and Sing,” known as the Black National Anthem. The song was meant as a display of unity, organized by the co-chairs of the Black, Latino and Asian Caucus, Council Members Ritchie Torres and Robert Cornegy.

Williams sat through the pledge and then rose to sing with his colleagues.

Williams’ demonstration began in September as a show of solidarity with professional football player Colin Kaepernick of the San Francisco 49ers, who knelt through the pre-game pledge of allegiance to protest racial injustice in policing. But the Council member’s message goes beyond that, he said, to larger issues that affect communities of color, including gun violence, education, and employment.

“When I initially did it, it was just out of frustration and I think the conversation is moving,” he said. “I think that’s what you want with these types of symbolic gestures,” Williams said. “I think that’s happened but I do want to make sure it is not just about policing. It’s about the disparate impact on all levels of life and resources that are lacking in these communities.”

Williams now wants to connect his protest to an issue he has been advocating for as a solution to injustice and inequity in communities of color: youth employment. In that vein, he wants to increase awareness about the city’s Youth Employment Task Force, a collaborative initiative between the City Council and the Mayor’s Office that was announced at the end of September.

The creation of the task force, chaired by Deputy Mayor Richard Buery and Council Member Julissa Ferreras-Copeland, who chairs the Council finance committee, followed a successful campaign earlier this year by Council members to push for increased funding for the city’s Summer Youth Employment Program.

As a result of Council pressure, the administration agreed to fund 60,000 summer jobs for city youth. “Many of us have been pushing for universal youth jobs as a way to push back on the violence that’s going on that’s too heavily relied on the police to fix,” said Williams, “and I want to make sure that people know that task force is meeting.”

The entire task force has already met twice, with the most recent meeting on Tuesday, and is set to meet at least twice more. They have also had several smaller working group meetings, according to a spokesperson for the mayor’s office, as well as focus group discussions to develop recommendations on expanding the SYEP program as well as the Work, Learn, Grow program, which provides career training and paid employment to youth during the school year. The spokesperson said the task force’s preliminary recommendations would be presented to the mayor and City Council by the end of the year.

Williams said he expected that the task force will release its report sometime in January or February, before the mayor’s preliminary budget for the next fiscal year. After that he will look to end his protest. “I definitely plan on standing when that report comes out and the mayor fulfils his commitment,” he said.

At an unrelated September 28 news conference, when Mayor de Blasio was asked to weigh in on Williams’ protest and if he would consider participating in such a demonstration, he said he respected the motivations behind it but takes “a different view with absolute respect for others who disagree.”

“I absolutely respect everyone's First Amendment rights. And I very much respect what's motivating this protest because this issue has to be addressed,” de Blasio said. “There's a fundamental inequality in this country – it has to be addressed...I take the view that the Pledge of Allegiance and saluting the flag during the national anthem are about an affirmation of our democracy that is still evolving that needs to get better, that needs to be truer to who we are and what we're supposed to be. And, I think that is a message unto itself that we believe we can fix things. But I also respect others who have a different choice and that is an American value that people get to make that choice.”