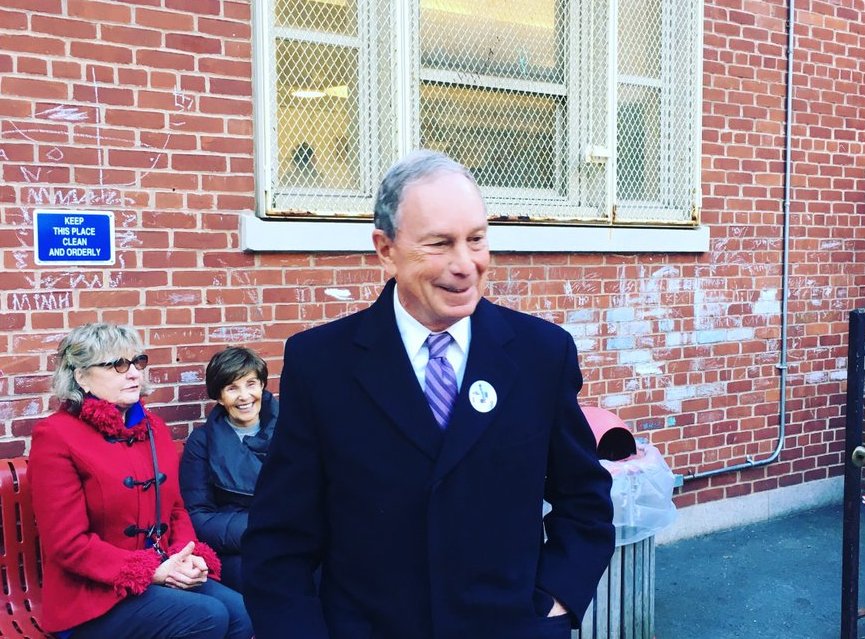 Former New York City Mayor Michael Bloomberg made national headlines when the Democrat-turned-Republican-turned-independent gave a primetime speech at this summer’s Democratic National Convention, during which he excoriated Donald Trump, then the Republican nominee for President and now president-elect, and outlined his support for Hillary Clinton, the Democratic nominee.

While Bloomberg’s choice at the top of the ballot did not go the way he wanted, the former mayor made a variety of other investments in people and policies that mostly did do well on Election Day. These include candidates for elected office from both major parties as well as state and local ballot initiatives related to gun control, charter schools, and public health.

For years, Bloomberg has used his considerable wealth to bankroll causes and candidates around the country. And this year, the three-term mayor and billionaire business mogul is seeing a good deal of return on investment.

The day before the election, Politico reported that Bloomberg had directed at least $65 million to individuals and policy points on the ballot November 8. In true Bloomberg form, his support cut across party lines and initiatives that sometimes even divide liberals and conservatives within their own ranks. As Bloomberg spokesperson Marc La Vorgna pointed out in a phone interview with Gotham Gazette, the former mayor’s “beliefs don’t fit neatly in any partisan playbook.”

Bloomberg’s spending was overwhelmingly for issue campaigns and ballot measures, with smaller amounts given to candidate campaigns, according to a tally provided by La Vorgna.  It included U.S. Senate and House races, local elected positions and ballot measures ranging from education to gun control. In a majority, Bloomberg got the result that he wanted.

“Overall, it was a very successful cycle,” said La Vorgna. “[Bloomberg] puts his contributions in a place where he can move the needle and have an impact, instead of just dumping money in races which are already well-funded.”

Even the large amounts spent for or against candidates was in part based on Bloomberg’s support of their record on particular issues. In the money-rich presidential race, Bloomberg made no monetary contribution even though he fervently supported Clinton. “We thought the speech would be more powerful if it stood on its own,” La Vorgna explained of the DNC address.

Bloomberg spent nearly $15 million through his PAC, Independence USA, on Senate races because of his support for background checks for gun purchases. Of that, $6 million went to ads in favor of Republican Sen. Patrick Toomey, who was successfully re-elected in Pennsylvania. Similarly, Bloomberg supported Democratic Gov. Maggie Hassan’s successful bid for the Senate from New Hampshire, with $8.5 million in ads through the PAC and a $1 million donation to Planned Parenthood Votes, which supported her race. Hassan narrowly beat her Republican opponent, Sen. Kelly Ayotte, whose record on gun control prompted Bloomberg’s involvement in the race.

The Bloomberg-founded Everytown for Gun Safety campaign spent $21.5 million and Bloomberg himself spent $3.5 million on the passage of background check referendums in Nevada, Washington, and Maine, the last of which is the only one that failed.

Bloomberg also celebrated success on numerous soda tax initiatives, an issue that he failed to implement in New York City as mayor but has since been promoting across the country. “He has made a commitment, one that he has held to, to stay out of New York politics,” La Vorgna said. “I expect that will remain the case.”

With full accounting for this cycle, Bloomberg will have personally spent nearly $20 million on the two soda tax ballot initiatives in Oakland and San Francisco, CA, both of which passed. He also contributed $200,000 to Healthier Colorado, an issue-advocacy nonprofit, on promoting a soda tax in Boulder, which was also victorious.

Earlier this year, Bloomberg spent about $1.6 million to support Philadelphia’s soda tax measure, which passed in June. He also paid for television and digital ads worth $1 million in Cook County, Illinois to support its proposed levy on sugary beverages. The Cook County Board voted on Thursday, two days after the election, to pass the tax.

As a strong proponent of charter schools, Bloomberg funded pro-charter education initiatives to the tune of $1.34 million. He donated $490,000 to the Great Schools Massachusetts ballot committee which was fighting for a ballot measure that would lift a cap on charter schools. The measure was rejected by Massachusetts voters. He donated $50,000 to the DFER [Democrats for Education Reform] Louisiana PAC to support candidates for the Orleans Parish School Board that were in favor of charters. The two candidates were re-elected to the board.

Another $500,000 went to the California Charter Schools Association to promote pro-charter candidates in races for the California State Assembly, State Senate and Oakland School Board. The remaining $300,000 helped support Families and Educators for Public Education, an education reform PAC sponsored by GO Public Schools, which favored candidates running for the Oakland School Board.

Besides backing Toomey and Hassan, Bloomberg also helped 16 other candidates in various state races through contributions, fundraisers and independent expenditures via his PAC. Most of those candidates were triumphant on Election Day.

He donated $5,400 each to the campaigns of Democratic Senator Michael Bennet of Colorado and Republican Senator Mark Kirk of Illinois, also hosting a fundraiser for Kirk. Bennet was reelected but Kirk was defeated by Democratic challenger Tammy Duckworth.

Bloomberg hosted fundraisers and contributed $2,700, the maximum allowable donation in the general election, to both Republican Senator John McCain of Arizona, who was reelected, and Kamala Harris in California, who became the first Indian-American U.S. Senator by beating Loretta Sanchez, a fellow Democrat. (California has a top-two primary system and candidates from the same party can often end up facing off in the general).

In six House races, Bloomberg had varying degrees of involvement, including some in New York. He donated $5,400 each to the campaigns of Anna Throne-Holst, Seth Moulton, Pete King and Joe Crowley, and gave $2,700 to Daniel Donovan. He hosted fundraisers for Throne-Holst, Moulton, and Donovan, a Staten Island Republican. His PAC also released $585,000 worth of ads in favor of Val Demings, a Florida Democrat who won an open seat in the state’s 10th congressional district.

Bloomberg also intervened in a number of gubernatorial races. He dedicated $250,000 each to three campaigns -- Kate Brown, governor of Oregon; Roy Cooper, a gubernatorial candidate in North Carolina; and Washington Governor Jay Inslee. He also hosted a fundraiser for Gina Raimondo, governor of Rhode Island, who will be up for reelection in 2018. Brown and Inslee won their reelection races and Cooper was on his way to victory with votes in North Carolina remaining to be verified.

In Pennsylvania, Bloomberg gave Josh Shapiro a $250,000 contribution for his campaign for attorney general, and Joe Torsella $50,000 to run for state treasurer. Both Democrats prevailed.

“We’ve shown a very successful model here that we’re going to continue to expand on and innovate on as we move ahead,” said La Vorgna. “He’s going to continue to support issues and people that he believes in. That crosses party lines and crosses over in races at the federal, state and local levels.”