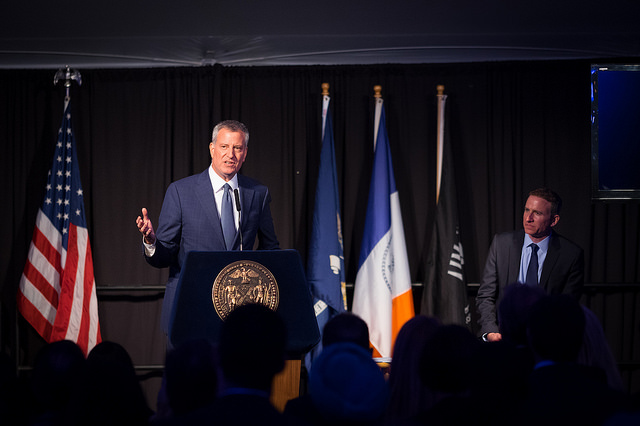 Speaking to an audience of more than a hundred people, many of them advocates of voting and election reform, the mayor made a forceful appeal to reinforce his recent call for reform bills in Albany. De Blasio lamented the fact that New York is well behind dozens of other states in making voter registration and the act of voting easier and asked those in attendance to help him push the state government to act.

“We know that the system as it’s currently structured under our state law literally cannot keep up with the reality of our modern democracy,” de Blasio said, bemoaning the state’s “arcane” electoral laws kept in place by entrenched lawmakers in Albany. “This state, this theoretically progressive modern state, when it comes to electoral laws, shows no evidence of being progressive and innovative and modern,” he added.

De Blasio is calling for same-day voter registration, early voting, electronic poll-books, and other reforms, including wholesale restructuring of the state law that governs the city Board of Elections. Promising to push state lawmakers in the coming months, de Blasio told the crowd that the status quo is not working. “Now we have to take this battle to Albany, once and for all. And I hope you will join me in that,” he said.

The symposium was hosted by Citizens Union, a government reform group, and co-sponsored by a number of organizations that promote voting reform and ballot accessibility. De Blasio’s keynote came after several panels on issues related to voting and elections that featured elected officials, advocates, and other experts. One participant was Assembly Member Brian Kavanagh, a Manhattan Democrat who sponsors a variety of the related bills in Albany, where they have passed the Democratically-controlled Assembly, but not the Republican-controlled Senate. Gov. Andrew Cuomo has expressed his support for the slate of election and voting reforms.

In the run up to the November 8 general election, and in the days since, the mayor has shown a renewed interest in voting reform. He held a major news conference the day before the state deadline for voters to register for the general election, hosted a number of Get-Out-The-Vote events before and on Election Day, and has been vocal about the need for reform on radio and television appearances.

On Friday, he reiterated his call for reforms, again citing the Bernie Sanders presidential campaign as motivation, and saying that in their absence the state has passively disenfranchised millions of voters. There are roughly 2 million eligible voters in New York State who are unregistered, he said, 1 million of whom live in New York City alone.

In the 2016 election, only 52.4 percent of voting-eligible New Yorkers cast a ballot, the 7th lowest turnout rate in the country and below the national rate of 58.1 percent, according to materials from Citizens Union handed out at the event. While voter participation has been increasing in recent election cycles, New York has consistently ranked below the national average turnout since 2000.

On the national level, the mayor spoke of the need to do away with the electoral college system, which allows a presidential candidate to be victorious without winning the popular vote. (Case in point, de Blasio-backed Hillary Clinton’s popular vote lead over President-elect Donald Trump has surpassed 1 million votes.) He also criticized the Citizens United Supreme Court verdict, as he often does, for facilitating the entry of massive amounts of money and corporate interests into elections. (De Blasio and his allies are the subject of multiple law enforcement investigations, including around whether the de Blasio administration did favors for donors to a political nonprofit the mayor's allies established. No one has been charged and de Blasio maintains no laws were broken.)

Closer to home, de Blasio called out the city Board of Elections, saying it would be a more efficient agency if he was allowed to manage it, if it was restructured, or if it at least accepted his offer of $20 million in exchange for substantive reform.

The mayor was preceded by reform advocates who delved into the myriad issues with voting in New York. They cited the lack of civics education in schools, the control exerted by political party machinery, a trust deficit in the political system, and voter fatigue as a few of the many reasons that the state has one of the lowest turnout rates in the country.

De Blasio was introduced by Dick Dadey, executive director of Citizens Union, who thanked the mayor for his attention to voting and election reform. Dadey also praised the mayor for following through on campaign promises and remembered first collaborating with de Blasio in the early 1990s when the current mayor was an aide to then-Mayor David Dinkins and the two worked on advancing LGBT rights.

“There is a status quo that is not working for a lot of people in this city, in this state, in this country,” de Blasio said of the political machinery and bureaucracy. “We have to be the ones to break through. I think this is one of those historical moments. It is our time, the momentum is with us, all of us who want reform.”