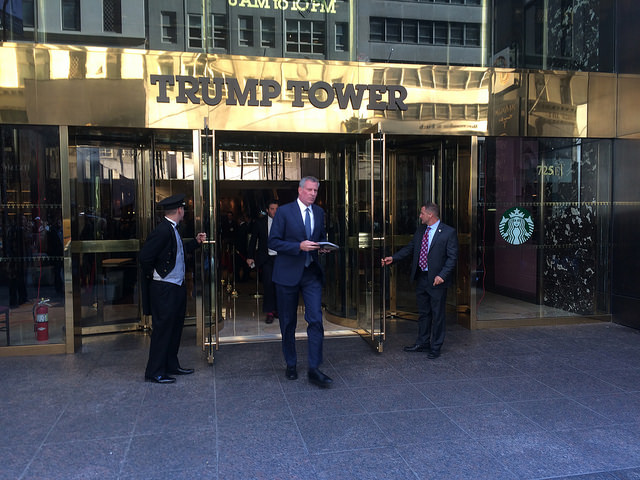 Since Donald Trump’s election as the next President, Mayor Bill de Blasio has had to face the reality of a threat he outlined as dire during the campaign. In doing so, de Blasio has met with Trump, spoken of being open-minded about the president-elect, and declared actions his city administration is ready to take if Trump attempts to follow through on some of his most extreme campaign promises.

The most clear threat from Trump to New York City was his pledge to cut off federal funding to so-called sanctuary cities, which are those like New York that welcome and protect undocumented immigrants. While de Blasio gave a speech explaining specific acts of defiance the city is prepared to take against Trump, if federal funding to the city was eliminated, it would cost New York roughly $8 billion, the amount it receives through Washington, D.C. toward its current operating budget of about $83 billion.

However, de Blasio has repeatedly said that, thanks to a United States Supreme Court decision, it wouldn’t be so simple if Trump does attempt to follow through on this threat. While de Blasio is probably right, the court’s 1987 ruling in South Dakota v. Dole does not mean de Blasio has an easy path to beating back federal attempts to cut funding to the city.

Asked about the possibility of federal defunding during his November 18 appearance on WNYC’s The Brian Lehrer Show, de Blasio said, “I think the first thing is to recognize that from what I know so far, because of a decision by the Supreme Court, no President is in position to cut off funding across the board. It has to be very specific to the matter at hand. If we disagree in one particular policy area, you know, there may be opportunities for the federal government to say ‘well we’re not going to fund you in that policy area,’ but not across the board. And I think it’s easier said than done.”

At a press conference a few days later, on November 22, de Blasio was asked for more detail on how he would handle “retaliatory cuts to federal funding.”

The mayor said, in part, “as we’ve talked about before, the last Supreme Court decision constrained the ability of the federal government to cut funding. There are some areas where the federal government can tie funding to certain conditions, but not across the board, not all areas of federal funding. It equates to specific lines of federal funding.”

The mayor hasn’t named the case he’s referred to, but when asked, a de Blasio spokesperson indicated it was South Dakota v. Dole, in which the Supreme Court ruled against South Dakota’s attempt to negate limits on federal funding tied to state policy, but also laid out terms on which Washington could tie appropriations to policy.

In citing South Dakota v. Dole, de Blasio does appear to be on to something. In essence, the court ruled that federal funding decisions tied to specific policies must have a rational and direct connection. As Erin Ryan wrote in 2012 for American Constitution Society, “In South Dakota v. Dole, the Court famously upheld spending power bargaining, so long as the conditions are unambiguous, reasonably related to the federal interest, promote general welfare, and do not induce Constitutional violations.”

Though attempts by a President Trump and like-minded Congress to in one fell swoop eliminate all federal funding to the city would likely be struck down in court, Trump and Congress may be able to systematically eliminate much of what comes to New York while still abiding by the Supreme Court’s South Dakota v. Dole ruling.

Trump and Congress would have to provide justification regarding conditions attached to individual spending appropriations, not blanket reasoning across the board. This would mean the federal government tying sanctuary city policies, like not cooperating with federal efforts to deport undocumented immigrants, to major budget allocations one by one. Big federal dollars currently go to city programs related to education, homelessness, poverty, and law enforcement -- it is not unreasonable to think of connections that can be made in each area. A key aspect of South Dakota v. Dole was the degree to which federal highway funds and the drinking age were related -- the majority saw them as related enough, while the dissenting opinion argued that they were not.

According to a new “initial analysis” of what federal defunding of the city could look like, city Comptroller Scott Stringer’s office said, “cutting off all Federal funds would have a devastating impact on the City’s budget,” especially with regard to agencies and programs that serve “the most vulnerable among us.”

Eleven city agencies, Stringer's analysis explains, that account for 59 percent of all city spending, receive 92 percent of all federal grant money to the city. “Those agencies include the Department of Homeless Services and the Administration for Children’s Services, among others,” the report states. “The NYPD budget for intelligence and counter-terrorism would also be at risk.”

As de Blasio indicated in a speech on Monday, November 21, New York City will be prepared to fight the Trump administration in court. If the next president and Congress do attempt to defund the city over its local policies, it’s likely that the fight would end up in court and be subject to interpretation of the Supreme Court’s ruling in South Dakota v. Dole as it applies to whatever actions the federal government is taking and the city’s relevant policies.

Aides to the mayor did not provide more information when asked how de Blasio became aware of South Dakota v. Dole, whether the Law Department has briefed the mayor on it, and how concerned the mayor is about case-by-case elimination of most federal aid to New York City.

“The mayor will stand tall in the face of any attempt by the president to cut vital services in New York City,” said de Blasio spokesperson Freddi Goldstein in a statement to Gotham Gazette. “We’re preparing cautiously and we’ll respond aggressively, but at this point it’s all speculation.”

A spokesperson for the Law Department said that it is “fully aware of the case.”

De Blasio and others have repeatedly stressed that it is unclear exactly what agenda Trump will pursue. The president-elect is known for altering his stances on issues and he is still filling out his cabinet, members of which will be pivotal in shaping federal policy in the coming months and years. There is little evidence that Trump is backing away from his campaign promises, though he has made more moderate comments in interviews when asked about certain agenda items.

In South Dakota v. Dole, the state challenged 1984 federal legislation that ordered “the Secretary of Transportation to withhold five percent of federal highway funds from states that did not adopt a 21-year-old minimum drinking age,” according to a summary from the Chicago-Kent College of Law. At the time, South Dakota allowed those 19 years of age and older to purchase alcohol and filed suit, naming then Transportation Secretary Elizabeth Dole as the defendant, and calling the legislation unconstitutional.

The court ruled seven to two against South Dakota. But in its ruling, it laid out key terms for federal grants to states that are applicable to Trump’s campaign promise and de Blasio’s response. Namely, that conditional federal grants must themselves be constitutional, and that the conditions must relate to the program(s) in question. In South Dakota v. Dole, the Court ruled that federal highway funds and state drinking ages fit the criteria.

During his November 21 speech on New York values, what New Yorkers should do now, and what the city will do if Trump follows through on certain campaign pledges, de Blasio said, “Our constitution says it – that so much of what is decided in the governance of our people is decided at the local level, according to the values of the people who are governed.”

“[W]e will fight anything we see as undermining our values,” de Blasio said. “And here is my promise to you as your mayor – we will use all the tools at our disposal to stand up for our people.” He then pledged, among other things, to “take legal action to block” any federal requirement that Muslims register; to “step in” if the federal government “tries to deport law-abiding New Yorkers who have no representation,” and to “not comply” if the Justice Department “orders local police to resume [unconstitutional practice of] stop and frisk.”