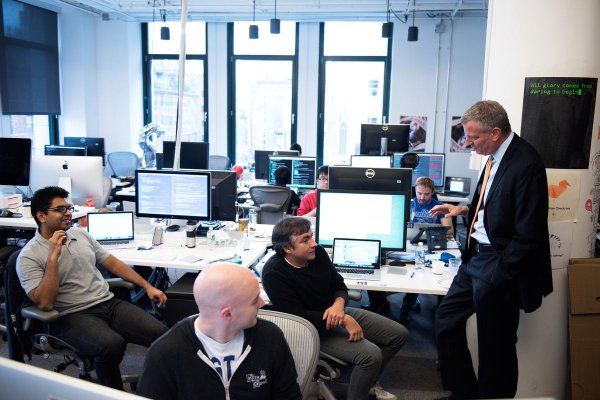 If there’s an undeniable takeaway from the 2016 presidential election, it’s that social media can play a crucial role in how candidates for public office communicate. Nationally and locally, political candidates and elected officials have for years recognized the role that platforms like Twitter and Facebook can play in public engagement and influencing traditional media.

For New York City’s three citywide elected officials -- Mayor Bill de Blasio, Comptroller Scott Stringer and Public Advocate Letitia James -- this holds true as well. And, ahead of the 2017 city election cycle when all three will be on the ballot, they are reconfiguring their online presences. This involves new accounts, increased tweeting, and navigating sometimes unclear or nonexistent rules. Using social media for campaign communication does require creating distinct accounts for government and campaign purposes.

De Blasio and James have taken steps in recent months to set up separate Twitter accounts for their government and campaign communications. Stringer has not yet done so. The comptroller is also the only of the three who has not yet declared with the city Campaign Finance Board which seat he will run for next year and is a potential challenger to de Blasio in a Democratic mayoral primary.

Stringer’s tweets of late have taken on a stronger personal tone, particularly in opposition to President-elect Donald Trump’s proposed policies and campaign rhetoric. The shift also coincided with the hire of a new communications director, Stringer brought Devon Puglia on board in mid-October.

As of October 19, de Blasio separated his official Twitter account, creating @NYCMayor, from his campaign account, @BilldeBlasio. Playing on the ‘Tale of Two Cities’ slogan from his first campaign, the campaign account tweeted: “A tale of two Twitter accounts — I’m back at @billdeblasio. Follow updates from me at City Hall at @NYCMayor. Tweets from me signed -bdb.” That was the only one of the account’s first 108 tweets signed by the mayor himself, as of earlier this week.

The campaign account, which had been @deBlasioNYC in 2013, has more than 66,000 followers while the mayor’s official government account has about 720,000 followers and has tweeted nearly 7,900 times.

Eric Phillips, the mayor’s chief spokesperson, confirmed that the official account is run by their digital communications team and would eventually be transferred to the next mayor. The @BilldeBlasio account is run by de Blasio’s reelection campaign staff, campaign spokesperson Dan Levitan said in an email. The campaign account has become very active as de Blasio has launched his re-election bid.

Public Advocate James’ office set up an official account, @NYCPA, in April this year with an eye on keeping James’ official communiques separate from her personal account, @TishJames. De Blasio, James’ predecessor as public advocate, had used only his @BilldeBlasio account.

“Whether it be Talk to Tish town halls or engaging on Twitter and Facebook, Public Advocate James goes where the people are,” said spokesperson Anna Brower, in an email. “The Public Advocate has expanded her social media use to ensure that she is reaching every New Yorker in every corner of our City.” The official account, run by her staff, has tweeted 336 times and has 1,251 followers, while James has posted more than 7,550 tweets on her personal account, active since 2009, and has a following of more than 26,200.

Comptroller Stringer is an outlier with his single account, @scottmstringer, which he has used since his days as Manhattan borough president, his prior position. He has been on Twitter roughly as long as James, but has been more prolific tweeting, with 10,300 tweets as of December 5. He has more than 23,500 followers, a few thousand fewer than James.

“The Comptroller has a real success story to tell about his fight to make New York a fairer place and his efforts to make government work better for everyday families,” said Puglia, Stringer’s communications director, in an email. “Our staff is working to communicate with New Yorkers in new and innovative ways on every platform. And we’re working to make government more transparent than ever before. In 2016, that means having an active, engaging Twitter account.” It’s unclear whether Stringer will set up a separate social media account once he officially declares a run for office, which may be re-election as comptroller or a mayoral bid.

[Update: during a February exchange on Twitter about the story after a new Conflicts of Interest Board advisory opinion was released that relates to social media use by elected officials and their aides, Puglia told Gotham Gazette, "our twitter account is and has always been the comptroller's official account. It was never for personal or political use."]

James is the only one of the three who appears to personally use her Twitter account on a regular basis. The public advocate is likely to run for re-election, but has not held any campaign events other than fundraisers.

Although social media cuts through the bureaucratic red tape and often helps elected officials engage directly with the public, it has its pitfalls as well. There are well-documented cases wherein elected officials have posted messages they should not have. Some are able to blame an intern and move on; others have seen their careers or candidacies torpedoed.

Meanwhile, the law does not evolve as fast as technology, creating legal and ethical grey areas at times.

At the federal level, the U.S. Office of Government Ethics issued a set of guidelines last year for federal employees and their usage of social media. But no such guidelines exist in New York for city employees or officials. A spokesperson for the New York City Conflicts of Interest Board said its advisory opinion from 2012, right before the last municipal election, would only generally apply in this case. As per the opinion, a government official may not use city time, resources or staff for campaign-related activities.

The COIB spokesperson could not say whether the board is currently studying the issue of social media use or if they would do so in the future.

“It is sort of a brave new world in terms of how a public official conducts the people’s business,” said Hana Callaghan, director of the government ethics program at the Markkula Center for Applied Ethics at Santa Clara University, stressing that it’s essential for officials to have separate accounts for their official work and their campaign activity. Last year, the Markkula Center held a roundtable to analyze social media from a government ethics angle and examined the accompanying dilemmas of transparency and accountability.

In a phone interview, Callaghan noted that social media usage has thrown up unique questions about governance and public communication. For instance, in California, she said, communications on Twitter and by email can now fall under the Brown Act, the state’s public meetings law, if there are a significant number of exchanges between elected officials. The law requires that any public meetings are posted publicly and accessible to the public.

Callaghan also said elected officials should be careful about over-reliance on social media since it’s not available to everyone and “they have a responsibility to all their constituents.”

New York City Council Member Ben Kallos, chair of the governmental operations committee, is an avid social media user who often solicits questions through Twitter during committee hearings. He’s well aware of the intersection of technology and governance and the issues that can arise with an elected representative’s use of social media. “Its pretty confusing to the public because they don’t know who to tweet sometimes,” he said of his own experience with separate accounts for official and campaign purposes. “So I have to spend double duty making sure I’m managing both, paying attention to both and ensuring that whether a constituent tweets my campaign or government [account], they get the services they need.”

“It can be a little bit of a minefield,” Kallos said, “but you just have to be extra cautious.”

Note: this story has been updated with further comment from the comptroller's office during a February exchange.