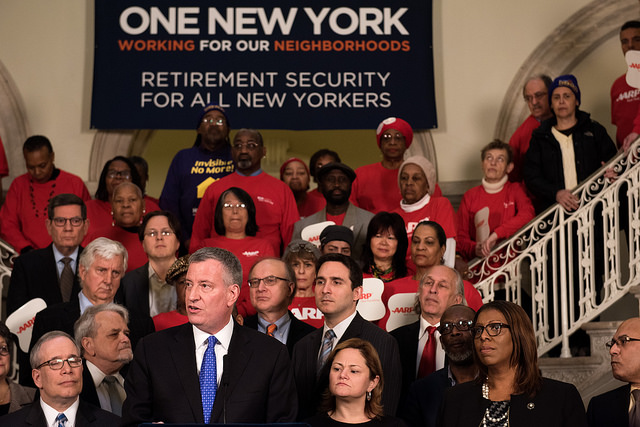 Responding to interest from cities including New York, the federal Department of Labor has ruled that certain municipalities can establish publicly-run retirement savings programs for private-sector workers whose employers do not offer such a program.

In February, Mayor Bill de Blasio announced his intention to create a new retirement-savings program during his State of the City speech, citing the fact that more than half of private sector workers in New York City do not have access to a retirement savings program through their place of work. New York City could become the first city in the country to launch such a program, which exist in five states.

The de Blasio administration hailed the Department of Labor ruling, which was posted December 19, as a key step in making the plan a reality.

“We applaud the United States Department of Labor for taking this important step toward building retirement security for everyday Americans,” said de Blasio spokesperson Freddi Goldstein, in a statement to Gotham Gazette. “For the better part of the year, we have been advocating and preparing to become the first city in the country to create a retirement savings program for private sector employees, and with the recent DOL rule, we are one step closer.”

Soon after de Blasio’s February announcement, the mayor rallied at City Hall with other top elected officials and advocates in support of creating a private-sector retirement-savings program in New York City. The mayor said he would be working with City Council Speaker Melissa Mark-Viverito, Public Advocate Letitia James, and City Council Member Ben Kallos on legislation. In June 2015 Public Advocate James released a reporting highlighting gaps in retirement savings for many New Yorkers. City Comptroller Scott Stringer, who oversees the city’s public pension system and was at the time studying the best path for a private sector program, also attended the rally in support.

In order to move a bill and launch a program, the city needed clearance from the Department of Labor, which it petitioned for and has now received.

“More workers saving for retirement now means more financially secure retirees in the future,” said U.S. Secretary of Labor Thomas E. Perez in a statement accompanying the DOL ruling. “This is good for workers and families trying to build their nest eggs, and good for the long-term strength of the economy.”

The DOL announcement said that three cities -- New York, Philadelphia, and Seattle -- have shown interest in launching a city-backed private-sector retirement-savings program. According to the de Blasio administration, the city would put up seed money to launch the program and expects it to be self-sustaining after an initial start-up period. The city would not have any additional financial burden and would not guarantee benefits like it does with its public sector pensions. Goldstein said there is no timetable for legislation at this point.

As initially outlined by de Blasio, the program would apply to workers at business of ten employees or more that do not already have a retirement-savings program (a pension or 401(k)). Businesses that offer programs could not dissolve them to move employees to the city-initiated one.

As mandated by the Department of Labor, it would be optional for workers, though advocates like AARP New York are calling for any such program to include auto-enrollment, which would make opting in far easier and is said to drastically increase participation. De Blasio’s initial proposal outline included auto-enrollment.

De Blasio’s February outline also said that contributions would be “exclusively from employees (rather than from employers or the City) and made through payroll” and “based on a default rate,” though “employees would have the ability to change their rate or opt out of the program.” Additionally, workers “would be able to transfer the savings account from job to job.” The city “would create a board to establish and oversee the management of the program,” which would be phased in over the course of years.

In October, Comptroller Stringer put out a detailed proposal for what the program could like like, including a new "NYC 401(k) marketplace."

In a statement Thursday, Stringer called the Department of Labor's new ruling "a major step in the right direction, because every worker should have a fair shot at a secure retirement." Of his report, Stringer said, "We hope New York City Nest Egg will be a blueprint for reform. This work is so important, and we will work with stakeholders across all levels of government to move this issue forward in the new year."

According to AARP’s policy shop, more than half of private-sector workers in New York State -- over 3.5 million people -- lack access to a retirement savings program, which are especially scarce through small businesses.

Per the de Blasio administration, “only 43 percent of working New Yorkers have access to a plan that can help them save for retirement,” but they are often subject to large fees, and “even those who have started to save do not have much: 40 percent of New Yorkers between the ages of 50 and 64 have less than $10,000 saved for retirement.”

The city-focused ruling from the Department of Labor, which applies only to municipalities of a certain size, comes after DOL paved the way for state-run programs earlier this year. New York Governor Andrew Cuomo already has a commission studying the issue. A state program could supercede a city one, though it would also depend on the details of the programs if the city were to launch one before the state. It is too early to tell which level of government will act first. In the city, Public Advocate James and City Council Member Ben Kallos are expected to lead on introducing legislation at the City Council, and the bill would likely go through Kallos' governmental operations committee.

According to the Department of Labor, “States and political subdivisions have a substantial governmental interest to encourage retirement savings in order to protect the economic security of their residents.”

“Our city and state leaders have a golden opportunity to empower millions of New Yorkers to build financial security,” said AARP New York State Director Beth Finkel, in a statement reacting to the new DOL ruling. “The state and city should fill in the gaps left by an economy in which fewer companies are able to provide savings options.”

Note: this article has been updated with comment from Comptroller Stringer and a few additional details.