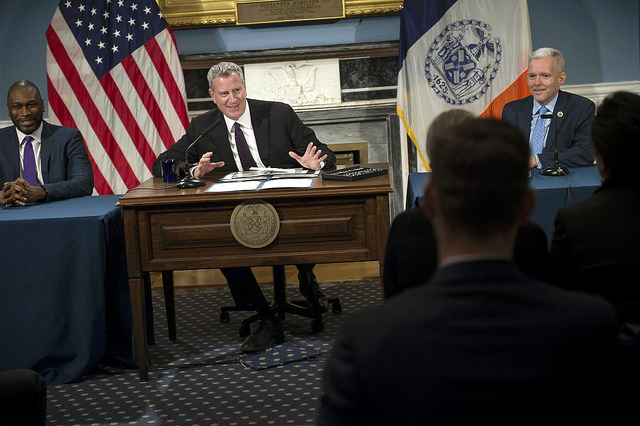 Mayor Bill de Blasio said on Tuesday at about noon that he had not yet been briefed by Governor Andrew Cuomo’s administration about the governor’s Executive Budget, which was set to be released several hours later.

“Coming in the door, we have still not been given the details of the state budget. Obviously that’s frustrating, but not surprising,” de Blasio told Gotham Gazette at an unrelated news conference in Queens. “We’re hoping to learn more in the course of the day and then we’ll be able to say very squarely what it means for New York City and I’ll be very straightforward with the people of New York City what we think it means for the lives of everyday New Yorkers.”

At around 4 p.m. the governor’s team did brief de Blasio’s budget director, according to sources in both administrations. “Our budget director has been briefed by the State on the broad strokes of the Governor’s budget proposal,” said a de Blasio spokesperson by email. “We're looking forward to receiving more detail and clarity in the days ahead.”

Neither the de Blasio administration nor the Cuomo administration would provide Gotham Gazette will further details about the state budget and New York City. De Blasio was set to travel to Washington, D.C. Tuesday afternoon to attend the U.S. Conference of Mayors winter conference. Cuomo is to publicly outline his budget Tuesday evening.

A Cuomo spokesperson did say that the governor’s budget -- which will soon be the subject of weeks of legislative hearings and negotiation with the state Legislature -- totals $152.3 billion, including about $98 billion in state operating funds (the rest is federal funding), which keeps Cuomo within his self-imposed 2 percent annual growth cap.

The governor briefed state Senate leaders on Tuesday afternoon and was set to brief Assembly leaders in the early evening before giving a 7:30 p.m. presentation to members of the media and live-streamed on the web.

Unlike previous years, Cuomo decided this year to separate his State of the State address and budget presentation, while also taking his State of the State on the road. Last week, Cuomo completed a three-day, six-stop speaking tour, which began in New York City with de Blasio in the audience. Cuomo outlined dozens of policy proposals, eventually releasing a nearly 400-page book with almost 150 specific ideas and plans, some of which will be included in his budget outline. A new state budget is due by April 1.

A week ago, after Cuomo’s New York City speech, de Blasio praised some of the governor’s proposals but reiterated that “we haven’t been given any inkling yet” of budget details. “[I]t doesn’t shock me,” the mayor said. “You know at the last moment we will be told what the budget looks like and then we will be able to analyze what it means and I will be very straightforward with the people in New York City what it means for all of us.”

De Blasio said the ideas in Cuomo’s speech -- like more college tuition assistance, criminal justice reform, and affordable housing funding -- were “promising in terms of helping New York City,” but that he was reserving full judgement because “we still don’t have the details...We don’t have the state budget yet.”

“[B]ecause this speech for the first time was not accompanied by the budget,” de Blasio told reporters January 9, “we don’t know yet the ramifications of everything that was being talked about in the speech, which is why I’ll express my praise for some of the things I heard, but until we see the details and particularly the budgetary details we can’t pass a final judgement.”

Last year, de Blasio journeyed to Albany, as he had the year before, to hear the governor’s combined State of the State and budget address. Just before that speech, Cuomo brought de Blasio into his office and told him that he was proposing hundreds of millions of dollars in cost shifts to the city within the budgets for CUNY and Medicaid, which are joint city-state programs. Before the adoption of the current budget, de Blasio and his Assembly allies were able to beat back those cost-shifts.

Earlier this month de Blasio said that Cuomo decided to withhold those budget plans to the last minute and would do so again this year. “That was not lack of communication with him and his team,” de Blasio said of being told last year just before Cuomo’s speech, “that was a conscious decision not to give us the information until the last moment. So, we are communicating all the time, the two teams. We’ll see if there’s any surprises this year.”

As for this year, Cuomo said in late December that “[tax] collections are down. We don’t know how far down, but we know there is a shortfall from the projected revenue, so the budget is going to be tighter than in past years.”

Asked by Gotham Gazette for more detail and whether he’d again be looking to shift costs to New York City, Cuomo said, “There’s always the question of whenever the budget is in question on who should pay what and what percentage. That’s part of the normal budget negotiations, not just with New York City, it’s with every city across the state literally.”

Speaking to reporters at an unrelated December 21 press conference in Manhattan, Cuomo continued: “You guys tend to see it just from the New York City perspective, but we are in conversation with New York City, we are with Buffalo, we are with Rochester, we are with Syracuse, with every mayor and the cities, every mayor in the state will tell you that their city is not getting enough money from the state.”

Many Albany watchdogs and legislators expressed dismay at how Cuomo was handling both his State of the State tour and budget release.

The governor and legislators have been on poor terms of late after a pay raise commission imploded late last year when Cuomo’s appointees refused to sign off on raises for state legislators without other reforms, like limits on outside income.

State Senator Sue Serino, a Republican from Hyde Park, tweeted of the governor’s budget rollout, “Secrecy is completely counter-productive. We should be working together to move NY forward. New Yorkers deserve transparency.” Serino had previously said “the whole process seems designed to distract.”