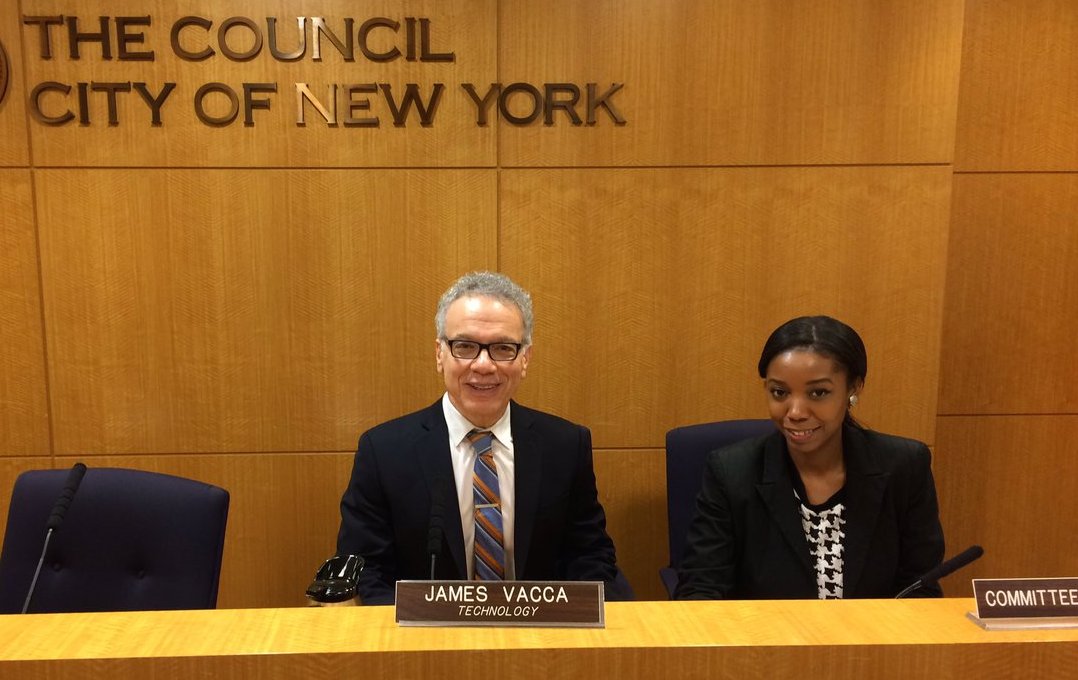 The New York City Council’s Committee on Technology held an oversight hearing Tuesday to evaluate the progress being made by the city in tracking compliance by government agencies with the city’s open data law.

The Mayor’s Office of Data Analytics (MODA) has been conducting what is essentially an audit, the “Examination and Verification Plan,” to gauge each agency’s status regarding its publication of required data sets on the Open Data Portal, an online access point meant to open government to the public.

This means public information on everything from motor vehicle collisions to wifi hotspot locations to leading causes of death, which, in theory, allows regular New Yorkers to better evaluate city services, gives civic technologists more to work with in acting as an outside of government check, and encourages problem-solving using data.

Tuesday’s hearing, chaired by City Council Member James Vacca, was the first on the examination and verification plan, which was adopted early in 2016. It showed that progress is underway in ensuring the quality of data and availability of the appropriate data sets, but raised questions about levels of agency participation, public engagement, and even what constitutes a public data set.

While the portal is not lacking in data -- over 1,500 data sets from 60 different government agencies are currently accessible -- Local Law 11 of 2012, the city’s first open data law, mandates that all agencies publish their respective public data sets in entirety by 2019.

MODA is employing the Examination and Verification Plan to ensure that each agency is on pace to meet that deadline. The plan calls for evaluation of three agencies per year. In 2016, the first year of the plan, the Department of Corrections, Department of Sanitation, and Department Housing Preservation and Development were selected for evaluation.

In his opening statement at Tuesday’s hearing, MODA Director and Chief Analytics Officer Dr. Amen Ra Mashariki spoke to the importance of examination and verification. “Its purpose is to improve citywide compliance by creating a more systematic way to locate data sets that may have inadvertently or purposefully been excluded from agencies’ self reported data,” Mashariki said, adding that all three agencies evaluated this year are “in good standing.”

As Mashariki alluded to in his statement, part of the impetus behind the open data law is to increase government transparency. The preamble to Local Law 11 states: “Making city data available online using open standards will make the operation of city government more transparent, effective and accountable to the public.”

The aggregation of agency data also benefits those within government. Representatives from MODA explained at Tuesday’s hearing that when government agencies are required to share data, they often have had to go through a manual process, uploading files onto a hard drive or disk. However, now that agencies are posting their data in the portal, other departments are able to access it without going through the antiquated data exchange process.

This could allow, for example, the Department of Transportation and the NYPD to access each other’s data more easily, which could aid the implementation of Vision Zero. As Mashariki put it, “There’s not only intra- but also inter-agency usage of data.”

While the hearing touched on a number of benefits of the open data initiative, Council Member Vacca, a Bronx Democrat who chairs the technology committee, did raise several concerns.

First, Vacca wanted to know when the examination and verification of the Police Department would be conducted. Crime statistics are frequently sought and police records remain among the most hotly debated in the city. Mashariki explained that while the NYPD is not scheduled for the examination and verification plan, MODA has been working with the department to publish and improve its data sets, some of which can be found in the portal. Mashariki added that while the NYPD is not currently on the books for evaluation, MODA “can begin looking into ramping up other agencies.”

Vacca was also generally curious about non-mayoral agencies, such as the New York City Housing Authority (NYCHA) and the Health + Hospitals Corporation, and their involvement in the examination and verification process. Mashariki explained that though those agencies are not held to the same data-release requirements as other agencies, MODA has been working to get their data on the portal, pointing out that Health + Hospitals has several data sets on the portal.

Vacca was particularly interested in traffic to the Open Data Portal, stressing that it is crucial to know how many people are making use of the newly available data. “Once we get actual numbers, we can decide whether or not we have to do more outreach and more engagement of community groups.”

While MODA could not provide definitive numbers, Craig Campbell, a Senior Advisor at MODA, did say that the most-viewed data set on the portal has received over five million hits (though he would not name the data set). Still, Dr. Mashariki firmly agreed that raising public awareness around the availability and advantages of open data must be a core objective. “We need aggressive engagement no matter what the number says,” he said.

One way in which MODA is striving to improve accessibility and engagement is through a new data portal website launching in March. The website, according to Mashariki, “makes it easier than ever to request new data sets on the open data portal.” Users will be able track the status of their requests and “get in touch with the open data team on anything from technical inquiries to partnership opportunities.” The website will also ensure that data dictionaries and geospatial fields (interactive maps) accompany all data sets.

Also testifying at the hearing was a representative from Reinvent Albany, a good government group focused on open data. The Reinvent representative, Dominic Mauro, largely commended MODA's work, but did raise concerns about whether an agency can be deemed compliant if it possesses data sets that are listed as public but which are not present in the portal, as is the case with the Department of Sanitation.

This concern prompted Mashariki to delve into the evolving nature of the open data effort, in particular the working definitions of what should be labeled as public data and would should remain confidential. “This process has helped us think a little smarter about what should or shouldn’t be a public data set,” he said. “The way we saw it is that the process is working if it’s forcing us to begin to think about what’s public, what’s private, and, to be very honest...I think that’s a conversation that should consistently be had.”

As it turned out, the status of the data sets in question was pending -- they had not been classified as either public or not -- which is why they had not made it onto the portal at the time of the hearing.

The public versus private determination that Mashariki referenced speaks to the conceptual as well as practical considerations involved in an undertaking like the open data initiative. Not only must MODA coordinate with agencies’ open data coordinators to aggregate data and ensure quality, they must also consider the spectrum of ramifications that come with publicizing certain information.

“For purposes of prioritizing public data sets, agencies shall consider whether information embodied in the public data set: (1) can be used to increase agency accountability and responsiveness; (2) improves public knowledge of the agency and its operations; (3) furthers the mission of the agency; (4) creates economic opportunity; or (5) responds to a need or demand identified by public consultation.”

But questions remain: Could some data sets be exploited to the detriment of New York and its residents? Does the potential for positive opportunity outweigh the potential for exploitation? What about privacy? For example, the Department of Corrections data contains a lot of Personally Identifiable Information on inmates which could potentially compromise an individual.

This question of definitions was echoed in the “2016 Examination and Verification Findings Report” issued by MODA on December 1. “Creating a list of eligible datasets is not a cut and dried process, and raised questions regarding the definitions of ‘public,’ ‘data,’ and ‘dataset,’” the report states. It also says that MODA will be working with the Department of Investigations to more clearly define these terms and develop a strategy for classification moving forward.