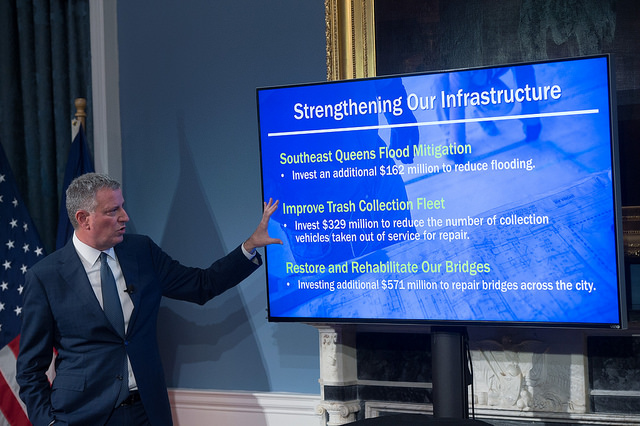 Acknowledging that there is significant “uncertainty” emanating from the new federal administration, Mayor Bill de Blasio on Tuesday unveiled an $84.67 billion preliminary budget for Fiscal Year 2018 that focuses on increasing the city’s savings while building on accomplishments from the last three years and addressing persistent challenges.

“I want to say at the outset that this budget was written with the assumption of profound challenges from Washington,” de Blasio said during a briefing at City Hall, “but without the details we need to be able to project what they will be, what shape they will take, in what areas and what dollar figures will be attached. It’s just too soon to be able to make decisions although we have some real indicators that worry us.”

“There’s no Trump-specific adjustment in the budget,” de Blasio said, in one version or another, repeatedly during a lengthy presentation and Q-and-A with gathered reporters.

The new spending plan is roughly $1 billion more than the $83.5 billion budget for the current fiscal year, which runs through June. The fiscal 2017 budget was modified in November, and is $2.5 billion more than the mayor’s last preliminary budget of $82.1 billion. (The current adopted budget remained the same as the preliminary proposal, at about $82.1 billion, though new spending was added that was offset by increased savings from preliminary outline to adopted budget.)

The mayor’s preliminary budget for fiscal 2018 will now be dissected by a variety of parties and the subject of weeks of City Council hearings, leading to a formal Council response, negotiations, and the mayor’s Executive Budget plan in April. That plan will then be the subject of still more hearings and negotiations before an agreement is reached between de Blasio and the Council.

As is always the case, the city budget must account for state and federal budgetary and policy dynamics. The election of President Donald Trump has thrown a major unknown into the equation. Governor Andrew Cuomo recently outlined his Executive Budget in Albany, which is now the subject of legislative hearings -- Mayor de Blasio will testify at one on Monday, which will provide a better sense of how the city is interpreting Cuomo’s proposed budget.

Budget watchdogs and fiscal monitors have generally praised de Blasio’s administration for its fiscal management over the past three years, but have warned that spending increases should be limited considering a number of challenges the city faces in the year ahead. As with last year, the city economy is strong, showing record growth in jobs, and the city has strong revenues, even with some slowdown of tax receipts.

But, at the same time, along with somewhat slower revenue, the city’s employee pension obligations have ballooned and the number of current city employees is at an all-time high. De Blasio specifically cited “slowing” real estate activity as a cause for concern, especially given the city’s heavy reliance on related revenue. All that, combined with the threat of federal budget cuts under Trump, has led the administration to tread fairly carefully in its budgeting this year.

Echoing prior presentations, the mayor said his budget focuses on “targeted strategic investments” in education, public safety, and infrastructure while creating historically high savings and reserves. De Blasio reiterated his first-term achievements and their budget corollaries: record-low crime rates through investing in public safety, including the addition of 2,000 new NYPD officers; financing about 62,000 units of new and preserved affordable housing; and funding universal pre-kindergarten for 70,000 children. These initiatives, de Blasio emphasized, have bolstered the city’s economic strength.

Although the preliminary budget projects tax revenue growth to slow down to 2.4 percent in the current fiscal year which ends June 30, that growth is expected to pick up again next year to 3.9 percent, the mayor’s presentation says.

De Blasio recognizes that the federal budget could significantly alter the city’s plans as early as before the executive budget is released, typically in April or May. Federal funds account for about $7 billion in the total preliminary budget and in five key areas, de Blasio pointed out, either President Trump or Republicans in Congress have proposed action that could impact the city. These include federal anti-terror funding, which would affect the NYPD; a repeal of the Affordable Care Act, which would shift heavy costs to the city’s already-beleaguered public hospital system; federal education aid and city school funding; deregulation of environmental policies and the city’s own environmental protection efforts; and federal housing funds that impact NYCHA developments and affordable housing overall in the city.

“We could not write dollar figures into a budget based on this level of uncertainty,” said de Blasio, who explained that he will continue to be firm with the president because Trump “respects strength.”

To stave off possible repercussions, the mayor has put aside significant rainy day funds for the next few years. The preliminary budget shows about $1.1 billion in identified savings, and the mayor directed the Office of Management and Budget to find another $500 million in agency efficiencies for the executive budget. (The city also says it has achieved $3.4 billion in healthcare savings through the 2018 fiscal year. The administration projects about $1.3 billion saved annually after that.)

The city has about $5.2 billion in total reserves, in three main buckets. The preliminary budget shows about $1 billion in the general reserve. The Capital Stabilization Reserve stands to save $250 million each year for four years, totally $1 billion, and the Retiree Health Benefits Fund holds about $4 billion.

Despite the historically high levels of savings and reserves, there are some who are wary of the mayor’s spending increases. The Citizens Budget Commission, a nonpartisan budget watchdog, pointed out in a statement that “a substantial portion of the expenditure growth derives from challenges managing serious problems, notably an inability to stem the growth in homelessness and in the reliance on overtime among city agencies.”

CBC added, “More should be done to better manage a range of municipal services. The Mayor’s plan builds upon his earlier effort to achieve savings from efficiencies, but the scale is still relatively small.”

City Council Speaker Melissa Mark-Viverito and Council Finance Committee Chair Julissa Ferreras-Copeland similarly called on the mayor to find additional savings, as they have in previous years. “During these uncertain times, when federal funding levels remain unclear, it is critical that the City adopts a budget that is fair, balanced and forward looking,” they said in a joint statement on Tuesday. “While we are pleased that the Preliminary Budget put forward by Mayor de Blasio today includes some of the programmatic savings and increase in reserves the Council has long called for, more must be done to find additional, lasting savings across all City agencies.”

The City Council tends to both call for added savings from the mayor and additional spending on their chosen initiatives. Those discussions will again play out over the coming months, over agency savings and added spending on things like youth jobs and summer programs for young people.

The mayor also outlined on Tuesday an updated 10-year capital strategy, which is due every other year. Itself an $89.6 billion plan, the capital program includes forward-looking infrastructure investments expected to create jobs in the short-term and have long-term impacts on the city’s economy. About $3.5 billion would come from the federal government, barring any cuts. This spending includes new roofs at NYCHA developments, more school seats, and thousands of repaved road miles.

De Blasio explained both positives and causes for concern in Gov. Cuomo’s executive budget proposal, promising to say even more on Monday in Albany. He praised Cuomo’s call for free public college tuition for many more New York students and the governor’s support for the DREAM Act. The governor also proposed an election reform agenda that parallels de Blasio’s own, proposed an extension of the millionaire’s tax and committed to funding its traditional portion of the city's Medicaid costs.

As the mayor approaches state and federal budget negotiations, as well as City Council hearings, he is highlights several new or added investments in his preliminary budget proposal:

$1 billion in capital funding for roof repairs at 729 NYCHA buildings over the next ten years. This is in addition to a $300 million investment over three years announced in 2015. It brings the total to $1.3 billion for 950 buildings.

$275 million to upgrade the Rodman’s Neck NYPD training facility over the next five to seven years.

$10.4 million to install bulletproof glass in all NYPD patrol cars

$571 million for bridge repairs across the city

$150 million for a life sciences research and development facility