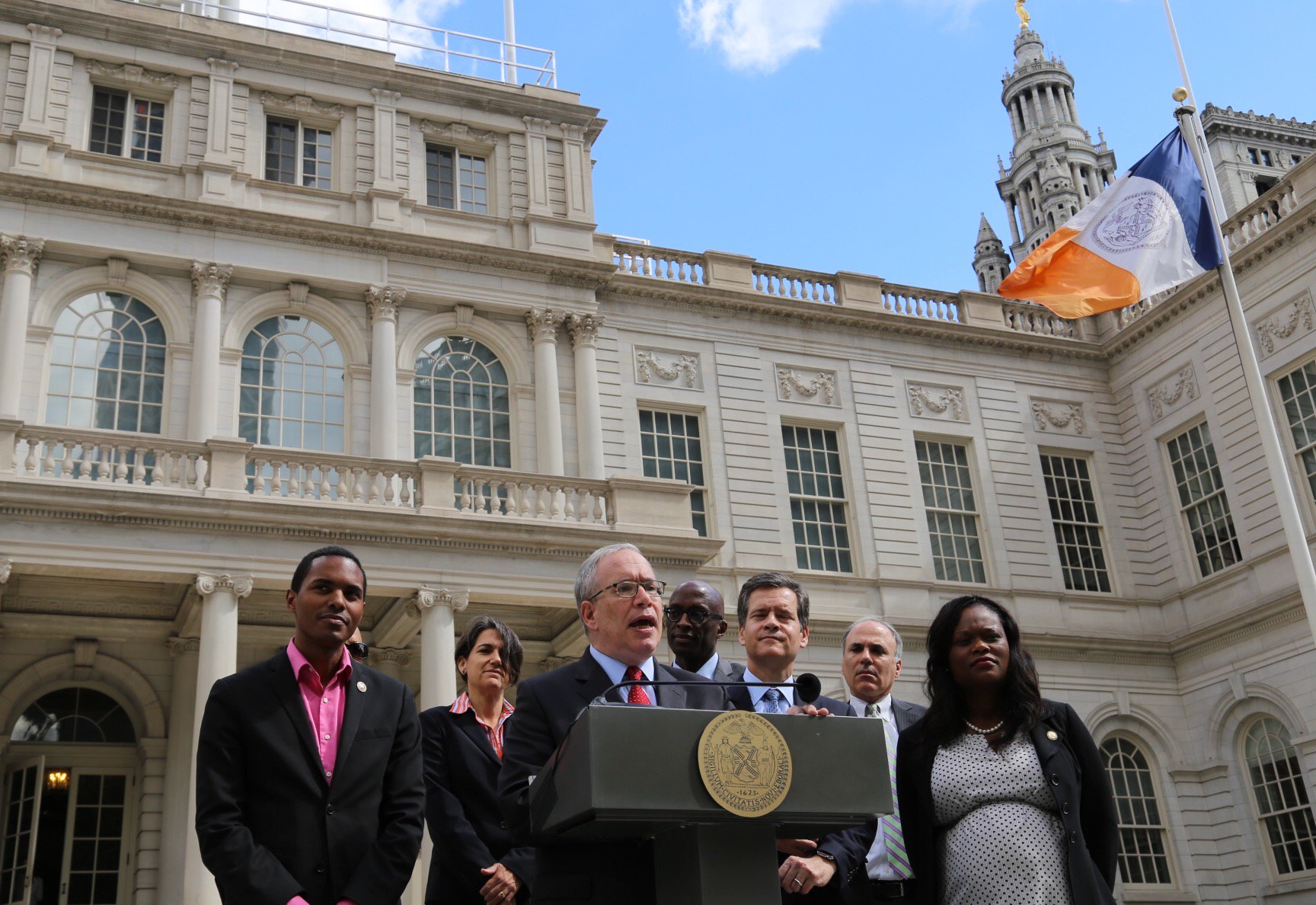 In his testimony before the New York State Legislature last week on the state’s proposed budget for 2018, New York City Comptroller Scott Stringer called for the expansion of a tax credit that could potentially pull thousands of New York City residents out of poverty, continuing a push he began last year when he first floated the idea.

The centerpiece of Stringer’s proposal is to triple the city’s Earned Income Tax Credit (EITC), a refundable tax benefit aimed at working families that functions on federal, state and city levels. The credit, which incentivizes employment, grants individuals and couples who qualify anywhere between several hundred and a few thousand dollars, depending on the number of children they have. New York state matches up to 30 percent of the federal EITC and the city matches another 5 percent. Stringer’s proposal would see the city’s contribution increase to 15 percent. It would require state lawmakers to authorize the city to expand its tax credit and would need the City Council to pass legislation, and it would have to be funded in the city budget.

“Tripling the City’s earned income tax credit puts money in the pockets of those who need it most,” said Stringer, in a statement to Gotham Gazette, noting that one-fifth of New Yorkers live below the poverty line. “It’s one of the most effective anti-poverty programs in America, and an expansion would have extraordinary benefits across the five boroughs. It would stimulate our economy, boost small businesses, and support local communities. Most importantly, it’s the right thing to do at a time when so many working families are struggling to make ends meet.”

The federal EITC, based on a household’s total earnings, gives up to $6,269 to a couple with three or more children making a maximum of $53,505 in a year. An individual without children making a maximum of $14,880 can receive up to $506 in a tax refund. The federal credit along with the state and city’s contribution combine for a significant benefit -- a maximum of $8,463 for qualifying New York City residents -- that can inject money back into the pockets of low- to moderate-income New Yorkers and spur spending.

Studies have found that the credit is highly effective at raising employment rates for single parents and that families with children typically use the credit to pay for things like home repair, maintenance on vehicles that are used to commute to work, and in some cases, to continue their education. This success has made the tax credit popular for conservatives and liberals, alike.

The comptroller first released his proposal, accompanied by a detailed report, in September last year at an Association for a Better New York breakfast event. The report projects that tripling the city’s contribution could lift 15,000 families above the poverty line. The average credit for an individual who qualifies would increase from $110 to $330, and for about 6000 New Yorkers, it would effectively nullify their city income tax burden. The proposal would cost the city between $210 to $220 million, spending which is likely to go back into the city economy. According to the comptroller’s office, roughly 950,000 New Yorkers qualified for the EITC last year, receiving about $2.8 billion in tax refunds. That translates to about 150,000 families that escaped poverty levels.

One setback with the credit is that many New Yorkers do not realize that they qualify for it. Under Mayor Bill de Blasio, a progressive Democrat, the city has recognized the strength of the EITC program. In 2015, the Department of Consumer Affairs (DCA) launched a media blitz to promote the tax credit, including ads in the subways, on bus shelters, in print, radio and online. That ad campaign has become a staple in promoting the city’s free tax preparation program. According to estimates by Civis Analytics, a data analytics firm that helped the city with its “Start By Asking” benefits awareness campaign, of the 1.1 million New York City residents that qualify for EITC, approximately 120,000 of them do not claim the credit, which is the city’s current concern. DCA spokesperson Abigail Lootens, in an email, said the agency is closely reviewing the comptroller’s EITC proposition. “We are also dedicated to reaching those who are currently eligible but not claiming this vital credit,” she said.

At the state level, Stringer has found an ally in Senator Jose Serrano, a Democrat whose district includes the South Bronx and parts of East Harlem, low- and middle-income communities for which the EITC is a boon. Serrano introduced a bill in the current legislative session based on Stringer’s proposal, to allow New York City to expand its EITC contribution. The senator stressed that expanding EITC is an “organic approach” to reducing poverty. “While it does require a financial commitment by the city, a vast majority of that money goes right back into the community,” he said in a phone interview.

Serrano’s bill is currently before the Senate’s Cities Committee, where he hopes it’ll receive the necessary support. The committee is chaired by Sen. Simcha Felder, a Democrat who caucuses with the Republican majority. A spokesperson for the governor’s office said the proposal would be reviewed.

“It is really such a timely bill,” Serrano said. “Over the last few years, the rich have gotten richer and the poor have gotten poorer. This will help bridge that gap a little and help people get above the poverty line.”

Ron Deutsch, executive director of the nonpartisan Fiscal Policy Institute, said both the city and state should increase their EITC contributions “to help bolster low-income family earnings and help boost them out of poverty.” Aside from Serrano’s bill, there are multiple proposals before the state Legislature that enhance the EITC in some shape or form, including a bill sponsored by Assemblymember Robin Schimminger, an upstate Democrat. Schimminger’s bill, which increases the state’s EITC from 30 to 35 percent of the federal EITC, has been introduced in three previous legislative sessions but has never made it beyond the Ways and Means committee. Schimminger’s office did not return a request for comment by publishing time.

“This is one of those bipartisan issues where there’s agreement,” Deutsch said. “In terms of why it doesn’t get done, I think it’s always a matter of political will in Albany. Given how many New Yorkers are struggling to make ends meet, this would be a logical means to address that.” He believes the state should increase its contribution to 40 percent, which he said comes with a price tag of $400 million annually. “I would suggest it’s a good investment that spurs the economy,” he said.

It’s unclear, however, whether Stringer’s or Schimminger’s proposals will find support in either the Democrat-run Assembly or the Republican-led Senate. Spokespersons for Assembly Speaker Carl Heastie, Senate Majority leader John Flanagan and for the Senate Independent Democratic Conference did not respond to requests for comment.

E.J. McMahon, research director at the Empire Center for Public Policy, a conservative think tank, believes the cost of expanding EITC is likely the only reason it hasn’t been achieved though it has the backing of fiscal conservatives. “It’s the most effective way to incentivize and reward work,” he said, noting that it would work better if expanded at the state level. He added, “It would win broad support if we could pay for it.”