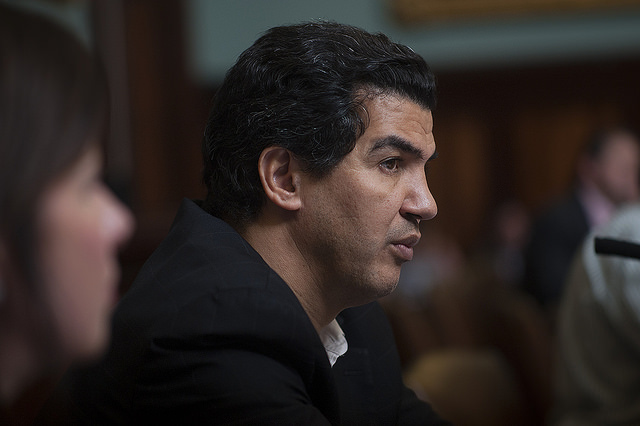 A campaign to provide discounted MetroCards to low-income New Yorkers took center stage at a City Council hearing on Monday, with council members and transit advocates calling for greater equity in the public transportation system.

The City Council’s Committee on Transportation conducted oversight of the Department of Transportation’s citywide initiatives to examine how they can better serve New York City residents. Central to the proceedings was the issue of transportation equity, the concept that transportation should be used as an equalizer and a conduit between low-income communities and the job-laden business centers of the city. Council members and transit advocacy groups expressed concern that Mayor Bill de Blasio’s administration has failed to prioritize fairness in the system, even as it moves forward on a number of transit projects including the citywide ferry service and the Brooklyn-Queens Connector.

The issue that dominated the debate was the 'Fair Fares' campaign to lower public transportation fares for low-income New Yorkers, launched last year by the Community Service Society, a nonprofit that fights poverty, and transit advocacy group Riders Alliance. The campaign is anchored in a 2016 report by CSS that found that 1-in-4 low-income city residents cannot afford the cost of MetroCards. As previously reported by Gotham Gazette, the mayor has been staunch in his refusal to put up the estimated $200 million to implement the cost reductions proposed by Fair Fares, which would provide half-price MetroCards for the roughly 800,000 New Yorkers living below the poverty line.

Council Member Ydanis Rodriguez, chair of the committee, said in his opening remarks that MetroCard costs were “preventative” for many New Yorkers, forcing them to “forego job opportunities, education, cultural experiences, doctor appointments, and more.” Rodriguez found support in other council members, including David Greenfield, Antonio Reynoso, and Donovan Richards. Just prior to the hearing, many of the council members rallied with colleagues, transit advocates and union representatives on the steps of City Hall, calling on the mayor to fund the Fair Fares proposal.

At the hearing, the council members asked DOT representative Eric Beaton to explain the mayor’s refusal to provide the required funding in the city budget. Beaton fell back on the mayor’s argument that the city could not afford the proposal and that the state-run MTA should fund it instead. He also pointed out that the city recently committed to a historically-high $2.5 billion contribution to the MTA’s capital plan and that there was simply no room in the budget for an extra $200 million.

Councilmembers Reynoso and Greenfield weren’t satisfied with the response, and Greenfield cited the $13 billion increase in the city budget under de Blasio as proof that the administration has the ability to cover “everything under the sun.” Reynoso echoed his sentiment, telling Beaton that the budget “is not a legitimate excuse” for failing to provide low-income New Yorkers with affordable public transportation.

The committee also touched on issues of transit access for residents of Far Rockaway and Southeast Queens, two areas notorious for their status as “transportation deserts.” Council members Richards and I. Daneek Miller, who represent those two neighborhoods respectively, stressed that their constituents are burdened with commutes of up to two hours, arguing that bus services in areas lacking subway stops must be made a priority so that residents are able to make the commute to Manhattan. Though Beaton agreed that bus efficiency must be improved, he again deferred to the MTA, saying that bus routing was the MTA’s responsibility.

David Jones, president of the Community Service Society and a mayoral appointee to the MTA board, pressed his organization’s push for Fair Fares, noting that unaffordable transit fares also create ancillary problems such as an increase in fare evasion, placing an added burden on the transit police and criminal justice system. These arrests lead to more criminal records for young people, Jones contended, simply because subway and bus fares are too expensive. Jones and Veronica Vanterpool, another MTA board member, have both called on the mayor to fund Fair Fares.

Jones was joined on the panel by Bronx resident Norma Ridez, who testified on behalf of Riders Alliance. Ridez, an unemployed single mother of three, said that between the cost of getting her children to daycare and grocery shopping, she “can’t afford a metrocard to get to [job] interviews.”

Though DOT’s Beaton and the committee members were frequently at odds, the two sides were momentarily allied in admonishing the MTA for failing to send a representative to the hearing. Public Advocate Letitia James was particularly critical, in both her opening and closing statements, expressing her “deep disappointment” that MTA representatives were not present to discuss their “unreliable system.”

Monday’s hearing and the preceding rally demonstrate wide-ranging support for transit affordability reform, but the fate of Fair Fares remains uncertain since neither the city nor the MTA are willing to be held responsible for the bill. MTA communications director Beth DeFalco noted in an email that the MTA already spends significant amounts on low-income riders, including $625 million specifically for seniors, schoolchildren and people with disabilities in New York City. “The MTA always tries to keep fares as low as possible and still provide safe, reliable service,” DeFalco said.

With no end in sight to the Fair Fares gridlock, low-income New Yorkers are left holding their breath on lower transportation costs. Attempting to underscore the impact of this funding stalemate, Councilmember Greenfield reminded those at the hearing, “You can’t get out of poverty if you can’t get to your job.”

With reporting by Samar Khurshid