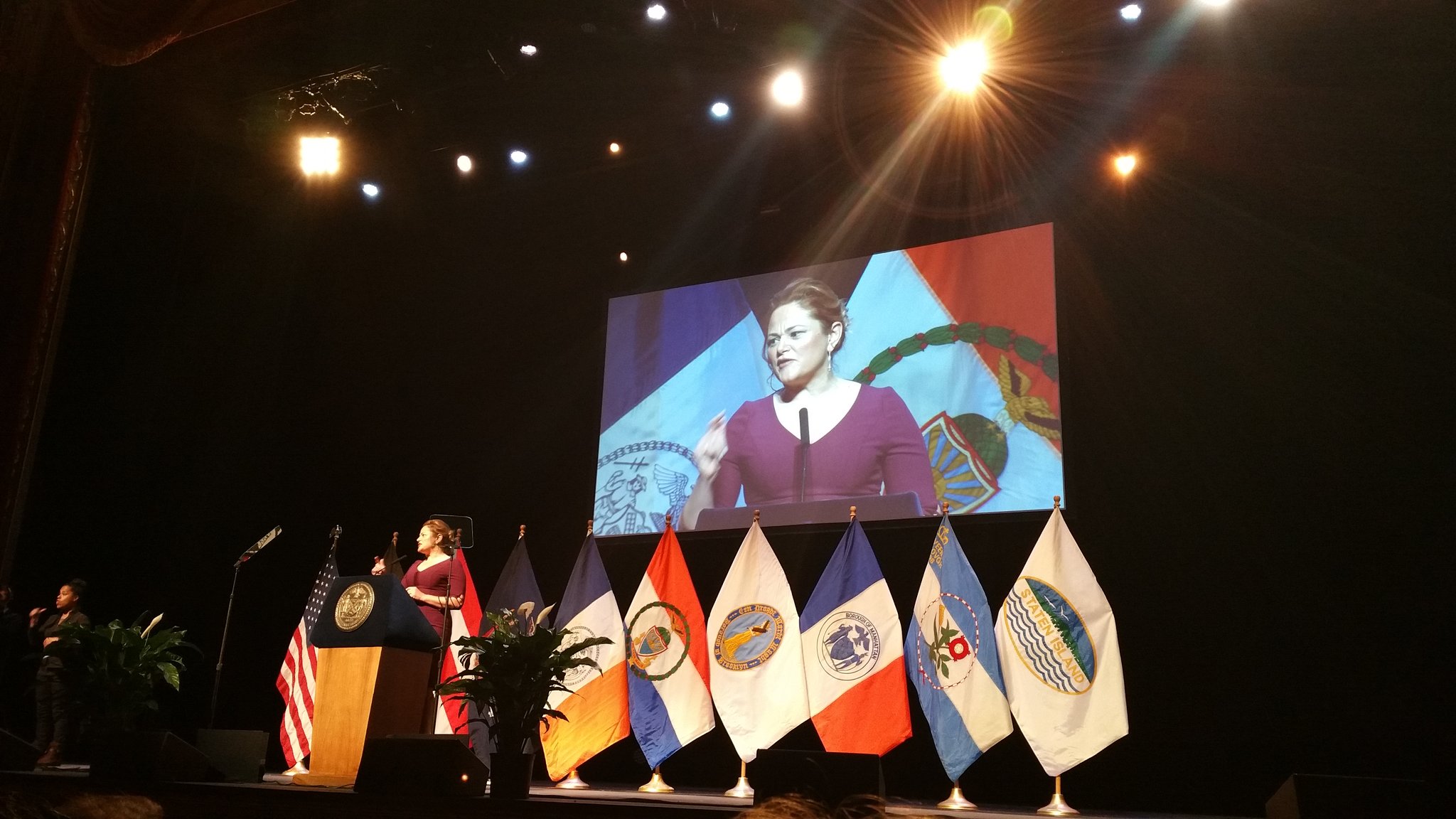 City Council Speaker Melissa Mark-Viverito vowed defiance against President Donald Trump’s immigration policies and promised to uplift and empower New York City’s immigrant population in her final State of the City speech at the Kings Theater in Brooklyn on Thursday.

Mark-Viverito, the first Latina speaker of the body, has 10 months left on the job before she is term-limited out of the Council. On Thursday, she sought to cement her legacy and inspire with her speech, titled “Who We Are,” that recognized the city’s cultural and ethnic plurality. As in years past, the heart of her speech was a commitment to justice -- for immigrants, for students, for women, and for those caught up in the penal system, to name a few.

The speaker took a staunch stand against recent actions by the federal government, in particular raids that were carried out across the country last week by Immigration and Customs Enforcement (ICE) agents, during which 41 undocumented immigrants from New York City were arrested. She said the city would not comply with federal immigration agents in targeting city residents who do not pose a public safety threat. “New York has always persevered, no matter the obstacle,” Mark-Viverito said, stopping short of mentioning Trump by name. “Whether defying a king in England or a president in Washington, we stand up for what is right.”

Mark-Viverito also proposed a slew of new legislations to protect undocumented immigrants, including one barring ICE agents from entering private areas on city property and offices that provide social services without a judicial warrant or court order; a bill to restrict ICE officials from entering public schools and accessing student records; and a system to limit the city’s collection of personal data and guidelines for disclosure of personal data to the federal government.

The Council will also attempt to baseline legal defense funding for immigrants facing deportation, she said, and establish immigrant family resource centers in each borough.

She also said officers of the NYPD, Department of Probation and Department of Correction would not be allowed to enforce federal immigration laws. “Three million immigrants live in New York City, they fuel our economy, they propel our city forward,” she said. “They are an indispensable part of our city’s landscape and they are absolutely, unquestionably New Yorkers.”

The city will also create it’s own “wall of resistance,” Mark-Viverito pledged, by coordinating policies and advocacy with other sanctuary cities and jurisdictions across the country. Additionally, she announced a first-of-its-kind conference of legislative leaders through the National League of Cities, scheduled for April at the City Council. “Just imagine dozens of Criminal Justice Reform Acts and municipal identification card programs instituted in every big city across the United States,” she said, touting two of the council’s key accomplishments in the last three years. “The possibilities for national solidarity on almost any issue are endless.”

Along with her focus on immigrant protections, Mark-Viverito also proposed a number of progressive measures, the likes of which have defined her tenure at the Council. She called for “culturally responsive” education that encourages conversations on race in city schools, measures to address cyberbullying, steps to reduce overcrowded classrooms and a comprehensive plan to teach sexual health education in public schools. Mark-Viverito vowed that the Council would aggressively and proactively protect women’s reproductive rights, ensuring access to free birth control in New York City and pushing state legislators to pass the Reproductive Health Act. And she said the Council will pass legislation requiring the city meet racial and gender equity goals in its policies and programs.

“We must make sure all New Yorkers are on equal footing - and that we’re providing a pathway for all New Yorkers to be heard and to succeed,” she said. “This is who we are.”

Mark-Viverito also committed to expanding criminal justice reform by reducing pre-trial incarceration, making bail procedures easier and reducing the population of the Riker’s Island prison complex. She expressed her support for raising the age of criminal responsibility from 16 to 18, an issue that is currently being debated at the state level, and said the Council will work with the district attorneys to clear low-level summons warrants that are more than 10 years old.