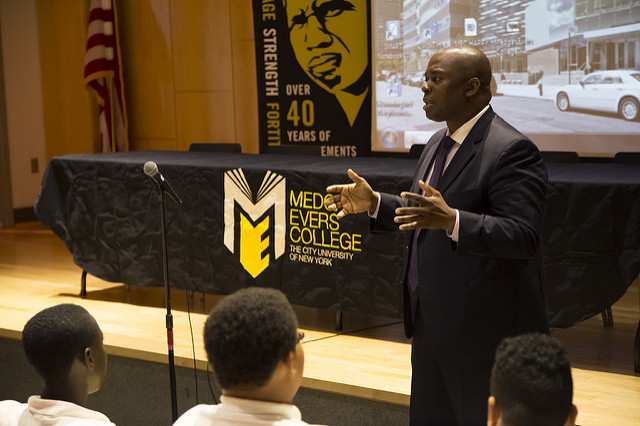 As city-contracted nonprofit organizations continue to call for funding increases from the de Blasio administration, Deputy Mayor Richard Buery insists that the administration is “sympathetic” to those concerns and is doing everything in its power to ensure a “strong and robust” nonprofit sector.

Nonprofits in the city that provide a range of contracted services, from mental health care and early childhood education to homelessness prevention, say they are facing a crisis of financial instability brought on by decades of underinvestment by successive administrations. As their costs soar and contracts remain relatively flat, many are cutting staff or whittling down their services to remain afloat. Nearly one in five are insolvent.

“There really has been absolutely a history of disinvestment in the sector which makes their work harder,” said Buery, who heads strategic policy initiatives for the administration, in an interview at City Hall. “I think under our administration, there’s really been an acknowledgement of that and I really do believe a real effort to address it.”

Under Mayor Bill de Blasio, a first term Democrat, there have been incremental efforts to buoy the sector and those who work in it, particularly by providing salary increases for employees at city-contracted nonprofits. Two years ago, the city gave 2.5 percent cost of living raises to human services nonprofits. The city subsequently announced a $15 minimum wage for all city-contracted nonprofit personnel and, in the mayor's recently-released fiscal year 2018 budget plan, is proposing 2 percent raises annually for three years for the 90,000 employees of human services nonprofits.

The city also established a Nonprofit Resiliency Committee last year, to examine structural problems in the sector and “streamline some of the bureaucratic challenges which wind up having a dollar impact, a financial impact on nonprofits that try to get work done,” Buery said.

Still, nonprofit groups argue that salary increases, though laudable, are not sufficient in the face of rising costs for insurance, rent, infrastructure, and more. “I think it doesn’t get to the heart of the problem,” said Allison Sesso, executive director of the Human Services Council. “The institution itself is financially struggling,” she said, separating the questions of employee wages and organizational solvency.

Sesso is one of nearly 200 human services nonprofit leaders who wrote to Mayor de Blasio in December, calling for a 12 percent increase in contracts across the board at an estimated $500 million price tag. “You count on us each day to ensure the wellbeing, safety, and security of our fellow New Yorkers,” the letter reads. “We fully embrace your equity agenda, but are compromised in our ability to help achieve it given the years of City neglect of our work. You inherited this situation, but it has continued to worsen and we need bold leadership now to fix it.”

Deputy Mayor Buery stressed that the city is committed to those fixes and is engaged in constant dialogue with the nonprofit sector, but change doesn’t happen overnight. “I think everybody understands that...problems that have taken decades to create, are not gonna be solved in one budget cycle, or two budget cycles,” he said, pointing out that the challenges faced by the sector aren’t a problem specific to the de Blasio administration but one faced by city government at large.

Buery also said that the services provided by these nonprofits are particularly critical at a “vulnerable” time for the city, facing a period of economic slowdown and potential federal budget cuts.

That vulnerability and uncertainty about the future is precisely why Sesso from HSC said the city needs to invest in nonprofits now, to shore up a sector that serves the city’s neediest population. And while she agrees that the crisis can’t be solved immediately, “It’s important they make a substantial move forward this year,” she said.

Sesso commended the administration for creating the Nonprofit Resiliency Committee and ensuring ongoing conversations with nonprofits. But, she said, “As an advocate, until I see the money in the budget, I’m not satisfied. You can’t solve the problem through efficiencies alone.”

The city budget cycle recently began with de Blasio’s presentation of his preliminary budget. It will continue with a round of City Council hearings, behind-the-scenes negotiation and lobbying, de Blasio’s executive budget, more hearings and negotiations, and a budget deal between the mayor and the Council by the July 1 start of the new fiscal year.

The Federation of Protestant Welfare Agencies, one of New York’s largest nonprofit service providers, has been pushing for increased funding not only in the city but also at the state level. And while the state has yet to engage with their efforts, the city’s initiatives are encouraging. “We’re seeing some evidence of interest in addressing the issue,” said Emily Miles, director of policy, advocacy and research for FPWA. Miles cited the minimum wage increase and the cost of living adjustment. “But there’s some ways to go,” she said.

Miles and her colleague, policy analyst Carlyn Cowen, praised the administration for tackling structural issues and soliciting feedback from organizations through the Nonprofit Resiliency Committee, something prior administrations ignored. “Having everybody at the table is pretty unprecedented,” said Cowen. But they emphasized the pressing need to strengthen human services nonprofits, echoing Sesso’s warning of how federal policies may impact New Yorkers.

For the administration, the fact that nonprofits are voicing their concerns is a badge of honor, Buery said. “The light that’s being shined on the problem is a good thing,” the deputy mayor told Gotham Gazette, “but it is in part a reaction to an administration which has been willing to shine that light and open that conversation.”

Buery expects that dialogue will continue through the budget process as the city assesses revenue, and analyzes where best to allocate spending. “The mayor’s really shown his commitment to putting his money where his mouth is and so we intend to move forward with this sector to make sure we continue to do so,” he said.

With the city economy humming, and jobs and tourism at record highs, de Blasio has rapidly increased the city budget over his three years as mayor. He has continued to announce new funding initiatives already this year.

Asked at a news conference on Tuesday about the funding for nonprofits in his latest budget, Mayor de Blasio said, “I think the issue of how to make sure each preventive service organization does their job as best as possible is a broader qualitative question and to make sure we have enough of these services available when we need them for families in immediate need...we have to make sure the quantity and the quality is right. In the meantime we’re certainly looking for every opportunity to improve the dynamics for those workers and the compensation they get.”