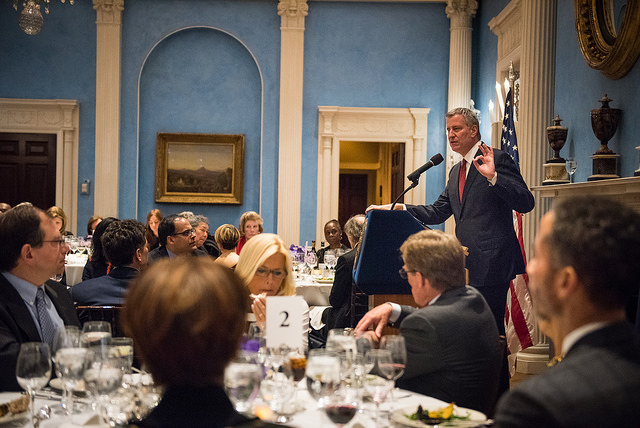 A report released by the city Independent Budget Office has raised questions about the potential effects of the so-called “mansion tax,” a proposed part of Mayor Bill de Blasio’s affordable housing strategy that would levy a 2.5 percent surcharge on the sale price over a threshold of $2 million for residential properties.

De Blasio put forward a version of the mansion tax proposal, which requires approval by the State Legislature and Governor Andrew Cuomo, in mid-2015. It failed to gain traction then. The mayor presented the current updated form at an Albany legislative state budget hearing in late January and reiterated it at his State of the City address February 13.

The mayor has said that he hopes the revenues from the tax, estimated by his Office of Management and Budget at $336 million in fiscal year 2018, will be used to subsidize rents for seniors.

The IBO report shows that about 8 percent of citywide home sales between 2014 and 2016 carried price tags of $2 million or more; and of those sales, 86 percent were for properties in Manhattan.

Manhattan Borough President Gale Brewer had requested that IBO examine the impact the tax would have on her constituency. Often in agreement with de Blasio, a fellow Democrat, Brewer told Gotham Gazette that she is opposed to the mayor’s mansion tax proposal.

“Manhattan should not be the cash cow for the rest of the boroughs,” Brewer said during a phone interview, adding that she would be “much more comfortable with [a threshold of] $5 million and not $2 million.”

At the State of the City speech, the mayor told his constituents to “ask [state legislators] if you think someone selling a home for more than $2 million can afford a little bit for senior citizens.” The tax would be paid by the buyer, according to de Blasio’s plan.

Asked if she would publicly oppose and testify against the tax if given the opportunity, Brewer said she would. She said she had not been in touch with the mayor or his staff about the mansion tax specifically, but had heard from constituents concerned about the measure’s effects.

In emailed comments expanding on the report, IBO Chief of Staff Doug Turetsky said there were arguments for and against the tax. A possible issue is the specter of a price cliff: “suddenly you will probably have a lot of sales priced just under the threshold for the mansion tax.”

However, he touted the proposal’s potential to level the playing field, as both co-ops and high-end residential sales paid in cash or with foreign financing are not subject to the city’s existing mortgage recording tax. “As a result, purchasers of a comparatively moderate priced home will likely pay both the city’s mortgage recording tax and real property transfer tax, while many buyers of the city’s most expensive residential properties will only pay the transfer tax,” he said.

Along with skepticism from Brewer, de Blasio is facing a long road to mansion tax passage in Albany, where both Cuomo, a fellow Democrat, and the state Senate Republican majority are philosophically opposed to new taxes. Senate Majority Leader John Flanagan has said his conference is interested in cutting taxes, and he is facing a Cuomo proposal to extend the state’s “millionaire’s tax.”

De Blasio has said that recent progressive victories indicate nothing is impossible to see through Albany if there is enough support. The mayor also argues the city needs the mansion tax revenue to bolster his affordable housing plan, especially for seniors, though the city has been rapidly adding to its budget under the mayor without additional taxes, given revenues have been strong amid a booming city economy.

“I don’t think the mayor has thus far made the case why the tax is needed for any particular agenda he wants to pursue,” said Carol Kellerman, president of the Citizens Budget Commission, adding that “it would seem to us that the mayor and the [City] Council are able to fund anything they need $330 million for” out of the already expanded, $84.7 billion budget the mayor has proposed for fiscal year 2018.

Melissa Grace, a spokesperson for the mayor’s office, dismissed the idea of a price cliff, arguing that, since the tax would only apply for the price over $2 million, “that’s not going to affect any buyer or seller’s behavior.” She also pointed out that the average home purchase affected by the tax would be $4.5 million, an argument the mayor also raised at an unrelated press conference this week when Gotham Gazette asked about his tax plan.

In response to Brewer’s concern of the money being used for other purposes, Grace said that according to the city’s proposal, the funds would go specifically to the recently announced Elder Rent Assistance program and could not be used for anything else.

The mayor added that, even if a federal tax cut does not materialize, “I still think the mansion tax makes sense...Someone who’s buying a $4.5 million home can afford to spend a little bit more.”