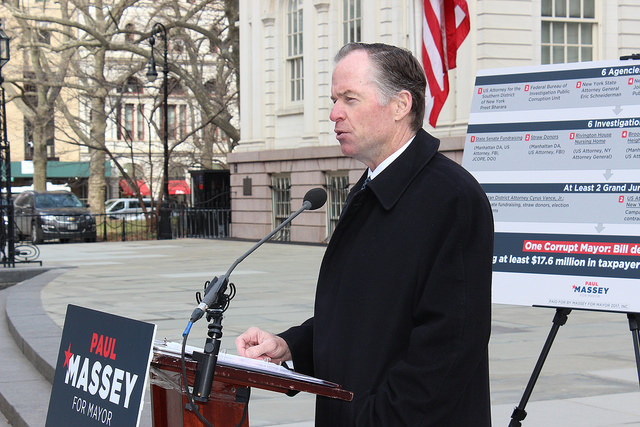 Mayoral candidate Paul Massey, a real estate executive running for the Republican nomination, has promised to not accept financial campaign contributions from people who do business with the city. But, that pledge does not apply to his current campaign, which has already received about two dozen donations from people with city business.

While Massey has made the promise on the trail, when presented with Gotham Gazette’s analysis of his contributors, Massey’s campaign clarified Friday that the candidate meant it prospectively -- he won’t accept contributions from those on the city’s “doing business” list if he is elected mayor, meaning for a potential re-election bid.

Massey has so far based his early campaign on criticizing Mayor Bill de Blasio, a first term Democrat, and has offered little in the way of concrete policy proposals. He has called the mayor “corrupt” based on the numerous state and federal investigations into his administration, and for purportedly awarding city business to campaign donors, which Massey pledged he wouldn’t do if he became mayor.

At his first news conference on February 21 at City Hall, Massey said the city needs a leader who could govern with “independence and integrity” and wasn’t beholden to special interests or any group “that either has business before the city or could influence his decisions in an irrational way.”

Massey repeated his pledge at a Wednesday event for mayoral candidates hosted by the Brooklyn Republican Party. “I’m living to the letter of the law with the election giving limits,” he said, according to Politico New York. “I think that, given the strict limits of the election law, no one will have influence on us…I will take no money, zero dollars, from anyone doing business with the city.”

Campaign finance records show that Massey is not yet following that pledge -- he has accepted about two dozen contributions totaling $8,200 from donors who are also on the city’s Doing Business Database. Under the city’s campaign finance law, people with city business can give a maximum of $400 to a mayoral candidate. Most of the doing-business contributions to Massey come from people in the real estate industry, and a few were bundled by an employee of Cushman & Wakefield, a commercial real estate company that bought Massey’s $2 billion brokerage firm, Massey Knakal Real Estate Services, in 2014.

Those contributions are no great sum, particularly given Massey has raised about $1.6 million, personally loaned his campaign another $1.2 million, and spent $1.96 million, largely on consultants. But certain, additional contributions also came amid larger ones connected with the doing-business donors. For instance, Stephen Katzman, president at S. Katzman Produce, gave $400 to the campaign -- Katzman is on the doing business list as his company is a wholesaler at the Hunts Point Terminal Market, which is leased from the city. But six employees of the company, three of whom appear to be relatives of Katzman, donated $25,250 all together. Five of them gave $4,950 each, the maximum permissible contribution to a mayoral candidate for those not on the doing-business list.

James Donaghy could only give $400, as he owns a construction company with city contracts, but he also acted as an intermediary and bundled $13,350 for Massey’s campaign. Mitchell Steir, another bundler, pulled together $12,400 for Massey, while giving $400 himself since he is also on the list.

Six other donors who are listed in the city’s Doing Business Database contributed more than the legal limit and their contributions were refunded, according to Massey’s campaign (Four of the refunds were not reflected on current campaign finance filings but the campaign said they would be noted in the next filing). Only one, Robert Von Ancken, subsequently gave the allowable max of $400 to the campaign.

Fullington, the spokesperson for Massey’s campaign, doesn’t believe there is a contradiction in the candidate’s pledge. “Paul Massey has been very clear that he will not take contributions from anyone doing business with the City once he is Mayor,” she said, in an email. “His friends and business associates are allowed to give money to him to support his campaign.”

Asked if 2017 campaign contributors may be barred from ever doing business with the city if Massey is elected mayor, Fullington said, “Anyone who has done business with Paul knows he has a record of integrity and he has been very clear to his campaign supporters that there will not be special deals once he is elected Mayor.”

That argument is similar to what de Blasio has said in defending himself amid allegations of a pay-to-play culture at City Hall related to the mayor raising hundreds of thousands of dollars from entities with city business for his now defunct political nonprofit, The Campaign for One New York. De Blasio continues to insist that all decisions he and his deputies make are “based on the merits,” not any donation.

The Massey campaign has so far been focused on attacking de Blasio, while portraying Massey in contrast to the incumbent as a strong manager, smart executive, and hard worker who is above reproach ethically.

Massey has also criticized the mayor for participating in the city campaign finance system’s public matching funds program. An email blast sent out by the campaign on Thursday read, “Bill de Blasio has a rampant history of corruption and can't be trusted with taxpayer money — or City Hall for that matter — but he is using taxpayer money to fund his campaign anyway.”

While Massey is required by city law to file disclosures with the city Campaign Finance Board, he is opting out of the public-matching system, which awards money to candidates based on donations up to $175. De Blasio is participating, as he did in 2013, and in prior campaigns for his previous elected offices.

Massey’s position is at odds with the general sentiment about the program, which is held up as a national model and tends to level the playing field for those candidates who don’t have access to significant wealth or a donor base of moneyed interests. “Paul is not taking matching funds, and would much rather taxpayer dollars go to the critical programs that make this City great, which serve our children, seniors and veterans,” Fullington said.

When Gotham Gazette emailed de Blasio’s campaign for comment on the doing-business contributions to Massey’s campaign and his promise to not accept them as mayor, spokesperson Dan Levitan simply responded, “That is amazing!”