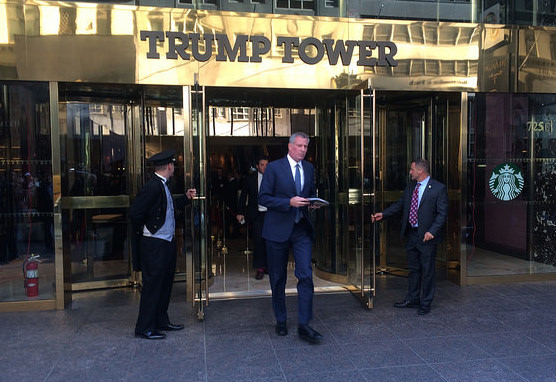 Perhaps so as not to pour salt in the wound, Mayor Bill de Blasio took a few days to give his assessment of what went wrong for Hillary Clinton in the 2016 presidential race. But, since he started to explain his take on how the Democrats blew it and the country wound up with Donald Trump as President, de Blasio has laid out in sharp terms what he believes should have been done differently.

“I think the campaign became about the wrong thing,” de Blasio said during a February 10 taping of Pod Save America, a podcast hosted by former aides to President Barack Obama, “...[it] focused on what was wrong with Donald Trump -- his character, his personality -- and not what we needed to do for the American people and how we needed to change things, and didn’t reference that extraordinary progressive platform enough.”

The mayor’s analysis, which he delivered almost jubilantly on the podcast and has given several times in recent months, appears to further validate his own 2013 victory and his philosophy around how Democrats must campaign throughout the country. It also seems to have served as definitional for him as he prepared his 2017 State of the City address, which he delivered on February 13, three days after taping the podcast in front of a live, friendly audience at the Brooklyn Academy of Music (BAM).

A few nights later at the Apollo Theater, in front of another supportive crowd, de Blasio headlined his primetime State of the City speech with a pledge to create 100,000 “permanent good-paying jobs” over the next 10 years. These, the mayor promised, will be jobs mostly in growth sectors like life sciences and pay at least $50,000 annually. The mayor framed it as “the next front line in the battle” against inequality and the city’s affordability crisis.

De Blasio outlined his approach to delivering on that promise to explain his administration is working to provide opportunity for people and, as he is also seeking re-election, giving them that “something to vote for.”

“I'm going to talk to you about the things that we are going to do as a city government, the investments we're going to make, and the impact we expect it to have,” de Blasio said during his State of the City.

Reading not from prepared remarks but from notes, de Blasio was at times repetitive, especially in hitting home that his activist, interventionist brand of government is doing what New Yorkers need.

He explained his “deeply held belief that the simple role of government is to respond to people's everyday lives, to constantly show that we can be there for people, that we can do something to change their lives.”

It was a speech, of course, but at times the mayor fell into the de Blasio pattern of telling instead of showing -- he was sure to say out loud what he wanted the emotional takeaways to be.

Directly connecting his analysis of the 2016 presidential election and his mayoralty, de Blasio said, “I have to tell you that so much of what we've seen this last year, so much of what we're talking about in this city and this country honestly stems from the fact that for too long people felt their lives weren't seen, their pain wasn't responded to, their needs weren't met. They felt that here, they felt that all over the country. They felt that when they looked at Washington D.C., and a lot of people voted in 2016 based on a pain that was very economic, very real. Because they hadn't seen answers.”

The same type of dissatisfaction with government, de Blasio was saying, propelled him into office in New York and Trump into the presidency.

One year after voters chose Trump in a stunning upset, de Blasio will be back on the ballot. He has begun his 2017 campaign by rolling out endorsements from several labor unions and elected officials. At events in which he accepts those endorsements, whether union halls or a Bronx church, de Blasio has showcased what his administration has delivered for New Yorkers -- universal pre-kindergarten, more affordable housing, neighborhood policing along with lower crime, and more. He must now convince voters, at least the Democrats that make up his political base, that he not only heard them, but followed through on his 2013 pledge to create a more equal city.

During his State of the City, before he turned to his new jobs push, de Blasio discussed the other side of the affordability coin: housing. He not only extolled the progress of his affordable housing plan, which aims to build or preserve 200,000 units of rent-regulated apartments over ten years and is on track to do so, but explained anti-eviction measures the city is undertaking to keep people in their homes and, in many cases, out of a shelter system that is busting at the seams. (The city’s homelessness crisis is a source of vulnerability for de Blasio.)

In the lead up to his speech, de Blasio had announced a deal with the City Council to fund a “right to counsel” in housing court, whereby qualifying tenants would receive free legal guidance or representation from the city.

Explaining the policy during his State of the City, de Blasio carefully articulated to New Yorkers that his administration is both fighting for them and giving them that “something to vote for.”

Describing the specifics of the policy, he provided the three instances where “you get a lawyer.”

In the 2016 election analysis de Blasio had delivered just three nights before, he said that Hillary Clinton “had a working majority in...states that she lost, but people stayed home because it didn’t feel enough it was for them and about them.”

During his State of the City, de Blasio read his playbook out loud, saying, “People have to see and feel every single day that their government is working for them, is on their side, find a way to make their lives better.”

At a recent press conference, Gotham Gazette asked the mayor when he decided to eschew the traditional State of the City model of running through a lengthy list of proposals, plans, and goals in favor of focusing on one central theme, that of affordability.

After saying that the State of the City is worked on year-round and tinkered with until the last minute, de Blasio said, “Really, over the few weeks leading up to this speech, I thought a lot about what I had heard from people all over the city and what I heard at town hall meetings.” Because of how much he hears about affordability, he said, “I felt that it would be smart to focus on it.”

The mayor added that he felt he had given much public discussion to his policing and education agendas, among other well-worn topics, and, “When I thought about where we needed to add more to the public’s understanding of the direction we were taking, it seemed to me it was around affordability.”