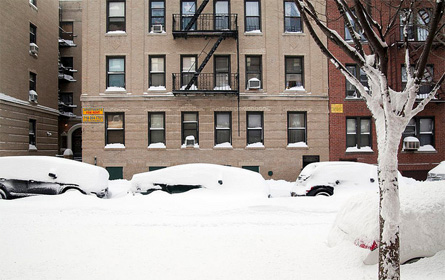 The storm will come down again on the Bloomberg administration this morning as the City Council kicks off the first of seven hearings on its response to the Boxing Day blizzard.

At least five members of the administration will testify at the Emigrant Savings Bank today, including Mayor Michael Bloomberg's second in command, Deputy Mayor of Operations Stephen Goldsmith. Goldsmith's whereabouts during the blizzard and whether or not he was at the reins controlling the city's response has been the subject of controversy since the 20-inch snowfall. The deputy mayor only joined the administration in April after serving as mayor of Indianapolis.

With the hope of digging out what went wrong during the December storm, which left trains at a standstill overnight and streets unplowed for days, council officials will likely throw icy snowballs at administration officials, who are still trudging to catch up with city services.

For instance, recycling pickup resumed only this weekend and delays in all sanitation pickups continue to plague certain neighborhoods.

"There are big questions," said Council Speaker Christine Quinn Friday on the John Gambling Show. "I think New Yorkers are angry, but they are also scratching their heads a bit. Usually we handle snow well. To see it go so off course you can't really understand what happened."

What They Hope to Find Out

It will be tough to shovel out of this one.

Administration officials can prepare to be hit from all sides by City Council members, who have called the city's response unacceptable.

Quinn said last week she hoped to get answers on the city's emergency management plan, what responses the plan should trigger from the administration and when the city diverged from those actions.

A spokesperson from the Office of Emergency Management would not provide Gotham Gazette with a copy of the city's snow plan, saying it was not policy to release the document publicly.

For a snowfall the size of the Boxing Day blizzard, the Office of Emergency Management starts preparations the day before the storm by holding a conference call with stakeholder agencies and departments, the spokesperson said. The call gives agencies an opportunity to request any assistance to prepare.

Before the blizzard, not a single agency requested help, according to the Office of Emergency Management.

The day of the storm, representatives from stakeholders meet at the city's emergency command center to coordinate the response efforts.

According to the spokesperson, ambulances stuck in unplowed, snow-inundated streets created the largest problem in the command center on Boxing Day. That issue has been thrust to the center of the blizzard debate. [See our accompanying story.]

"[The mayor] thinks the response was inadequate, and I think we feel that way as well," said Chris Gilbride, a spokesperson at the Office of Emergency Management.

Councilmember Peter Vallone Jr., the chair of the council's Public Safety Committee, hopes to find out why the city failed to call a snow emergency, which would force drivers to move their cars from certain narrow streets. He also plans on hammering the administration on the large backup of calls to the 911 system. On Dec. 27, the day after the storm started, the city had 49,478 calls to 911.

Other officials are taking a broader tact.

"What information did the mayor have when decisions were made and who provided it to him?" asked Councilmember Jumaane Williams, the chair of the Committee on Oversight and Investigations, last week. "What was the communication between agencies and inside agencies, and did they have a plan before the storm, and was that plan adjusted?"

The council's review of the city's response is just one of four separate investigations into the blizzard. Both the city Department of Investigation and the Brooklyn U.S. Attorney's Office are examining whether workers at the Department of Sanitation intentionally slowed down plows and shovels to protest recent demotions and budget cuts. The administration also is conducting its own internal review, led by Elizabeth Weinstein, the head of the Mayor's Office of Operations.

On to the Next Storm

On Friday, as a fresh blanket of snow covered the city, plows were out as the first flakes fell. Bloomberg deployed the city's SCOUT teams to monitor the cleanup's progress and 50 sanitation trucks were equipped with GPS.

About two inches fell in the five boroughs, but the administration wasn't taking any chances. (The day before the latest snowfall the mayor's approval rating dipped to an all time low of 37 percent.)

The actions on Friday have not stopped council members from proposing other solutions to snowfall.

Williams plans to introduce six bills in response to the storm, including a measure that would waive all parking tickets from Dec. 27 through Jan. 3. In the future, Williams wants to suspend alternate side parking after a certain amount of snowfall. His legislative package would also waive any tickets given to senior citizens who didn’t shovel their snow and require the Office of Emergency Management to provide City Council members with an action plan 24 hours before a major storm.

Vallone is exploring a bill to force the mayor to file a certificate with the City Clerk if he leaves town for more than 48 hours. To this day, Bloomberg refuses to say where he was in the lead up to the storm. The bill, Vallone said, would also require the mayor to say who is in charge.

Councilmember Letitia James, who will chair today's hearing, said her office is considering legislation to prevent a similar snowstorm response in the future. But she declined to provide specifics until after the administration's statements today.

Today's hearing starts at 11 a.m. The council will hold a second hearing on the Metropolitan Transportation Authority's response to the storm on Friday.

The council will not take public testimony today, but it will hold five separate public hearings in each borough next week.