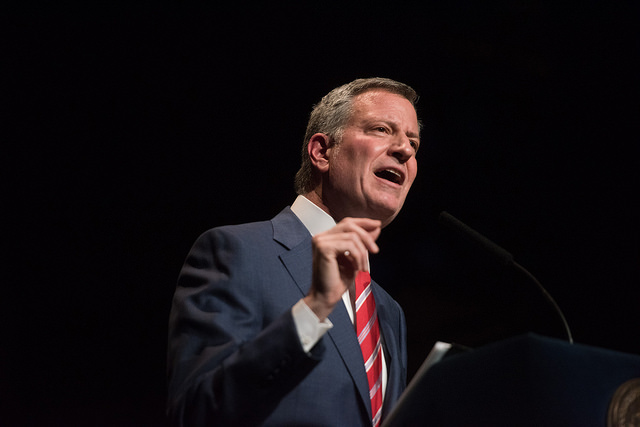 Federal and state prosecutors, who had for the last year been investigating the fundraising activities of Mayor Bill de Blasio and his associates, announced on Thursday that they would not be bringing any criminal charges in the two parallel investigations.

The mayor and his aides had been the subject of two probes -- a federal investigation into allegations of quid pro quo in their fundraising for his 2013 campaign and the Campaign for One New York, the mayor’s now-defunct nonprofit, from donors who have business with the city; and a second investigation into the alleged funneling of donations to state Senate Democratic candidates in 2014. The mayor maintained throughout that he and his team had sought and followed the appropriate legal guidance and that they would eventually be vindicated.

On Thursday, acting U.S. Attorney for the Southern District of New York, Joon H. Kim, ended any speculation by announcing that his office would not be handing down indictments in the federal case. “After careful deliberation, given the totality of the circumstances here and absent additional evidence, we do not intend to bring federal criminal charges against the Mayor or those acting on his behalf relating to the fundraising efforts in question,” said U.S. Attorney Kim, in a public statement, noting the high burden of proof in public corruption cases and “the particular difficulty in proving criminal intent in corruption schemes where there is no evidence of personal profit.”

Kim also noted that Thursday’s announcement was an uncommon move by his office but one necessitated by the upcoming municipal election. “Although it is rare that we issue a public statement about the status of an investigation,” his statement read, “we believe it appropriate in this case at this time, in order not to unduly influence the upcoming campaign and Mayoral election.”

On WNYC’s The Brian Lehrer Show on Thursday, soon after the announcement, according to the New York Times, de Blasio said, “I’ll just say simply it’s been basically a year, I’ve said consistently that we acted appropriately. This confirms what I’ve been saying and what all my colleagues have been saying.”

But, the decisions by prosecutors did not let the mayor completely off the hook. Manhattan District Attorney Cy Vance, whose office was conducting the state investigation, said that he could not bring criminal charges, but he didn’t stop there. In a 10-page letter to the Board of Elections enforcement counsel Risa Sugarman, who made the original referral for criminal prosecution in the senate fundraising case, Vance wrote, “After an extensive investigation, notwithstanding the BOE’s view that the conduct here may have violated the Election Law, this office has determined that the parties involved cannot be appropriately prosecuted, given their reliance on the advice of counsel.”

Vance emphasized that the lack of an indictment did not mean an endorsement of the mayor and his aides’ behavior, which he said violated the spirit and intent of the campaign finance law and its contribution limits. He also said the relevant election law statutes were ambiguous, making enforcement a challenge, and made three recommendations to the BOE and the state Legislature to prevent similar misconduct in the future.

He noted that the BOE was not precluded from pursuing civil or regulatory action, that the Board should issue an advisory opinion to note which conduct is prohibited or allowed under the election law criminal statute, and that the Legislature should tighten the loopholes in the election law that undermine contribution limits.

De Blasio’s press secretary Eric Phillips, in a statement on Thursday, hailed the prosecutors’ announcement as vindication of the administration. “We have been confident from the moment these reviews began that the actions of the Mayor and our Administration have always been within the law,” Phillips said. “The United States Attorney and Manhattan District Attorney have now put to rest any suggestion otherwise. We thank these prosecutors’ offices for conducting what were clearly diligent and exhaustive reviews – and for making public the conclusions of these probes. New Yorkers deserve honest, progressive government. With this Mayor, they will always get it.”

The cloud of both investigations had hung over the de Blasio administration for months and the mayor’s opponents have been using them to criticize his management style and record, not to mention his personal and professional integrity. Those same opponents, some within his own party, had also been playing a game of wait-and-see with the two probes to decide if they would try to challenge him as he faces a reelection later this year.

Now, with the investigations having come to a close, it looks like mostly smooth sailing ahead for the mayor’s reelection campaign. Potential opponents are likely to be dissuaded to run against him and those who have often cited the investigations to condemn him will have little ammunition left after Thursday.

Comptroller Scott Stringer, a fellow Democrat but frequent critic of the mayor and one bigger name considering a mayoral run, said in a Thursday statement, "The outcome today is a positive one for the city, allowing the important work of our government to move forward without distraction. I imagine these investigations have been a long, difficult process for the Mayor and his staff. On a personal level, I'm very happy that they and their families can move on from this. And for our city, let’s focus like never before on tackling the important issues facing everyday New Yorkers.”

Another regular de Blasio critic, consultant Bradley Tusk, who has been trying to recruit Stringer or another Democrat to challenge the mayor, took sober stock in a statement. “Although the city deserves far better than this, the people best positioned to succeed in a Democratic primary are now unlikely to run, and we should therefore expect four more years of Bill de Blasio,” he wrote. “Perhaps going through multiple criminal investigations will lead the de Blasio team to treat both the law and the job more seriously going forward – and for the sake of all New Yorkers, we very much hope it does.”

Note: this article has been updated with comment from Comptroller Stringer.