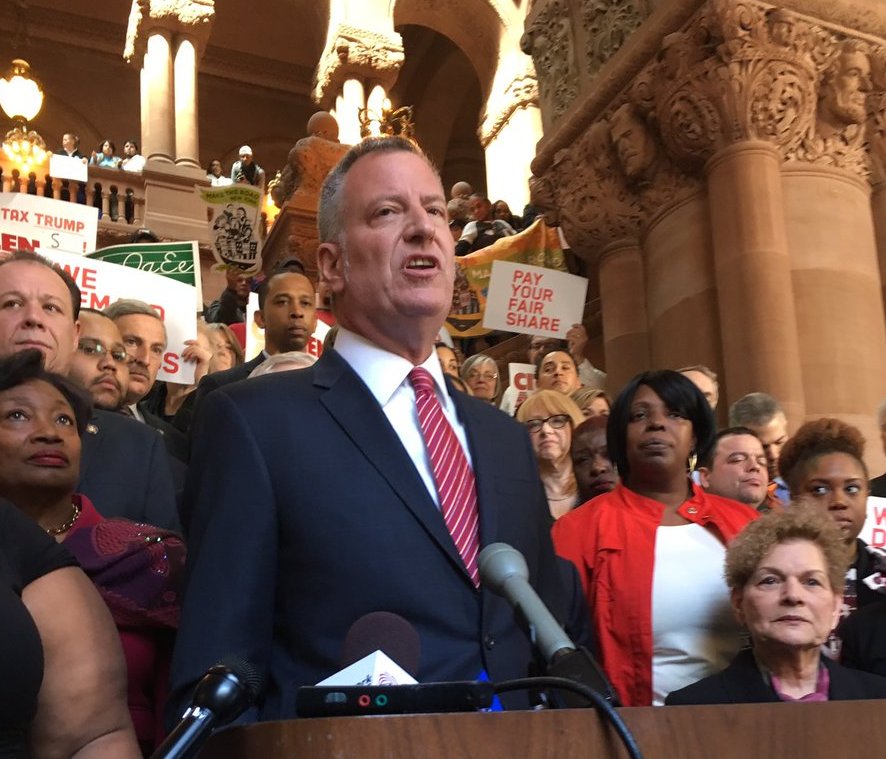 Mayor Bill de Blasio journeyed to Albany Wednesday to rally with Democratic legislators and activists for the extension of the “millionaires’ tax,” set to expire this year, as well as the “mansion tax,” a proposal the mayor has been pushing since 2015. De Blasio and his allies called for both to be part of the new state budget due by April 1.

Citing the threats of deep federal budget cuts from President Donald Trump’s administration and a Republican Congress and the likelihood of tax cuts for the wealthy, de Blasio struck a populist tone as he pushed for the two taxes. The millionaires’ tax would continue across the state and is being backed strongly by Governor Andrew Cuomo, while the mansion tax would only apply to New York City: an additional 2.5 percent marginal tax paid by the buyers of homes valued at $2 million or more, the revenue from which would directly fund rental subsidies for up to 25,000 seniors in New York City. Cuomo has not given a clear position on the mansion tax.

When he spoke from the steps of the State Capitol’s historic “Million Dollar Staircase,” de Blasio was flanked by Assembly Speaker Carl Heastie and Senate Minority Leader Andrea Stewart-Cousins and surrounded by dozens of Democratic lawmakers and advocates. The mayor said that the 2016 presidential election centered around issues of income inequality and the plight of the working class. However, he noted, the young Trump administration has responded with proposed tax cuts for the wealthy, corporations, and insurance companies.

“There is an anger in this country and anger in this state as people feel they are being lied to. They thought they were going to get some relief from their economic distress,” said de Blasio. “What they are finding is quite the opposite, that the rich are getting richer.”

Funds generated by the mansion tax, which has a steep road to passage through the Republican-controlled state Senate, would be earmarked for seniors 62-years-old and older who earn less than $50,000 per year. Citing recent sales data, the de Blasio administration says the policy would affect the top 4,500 residential real estate transactions in the upcoming year and generate approximately $336 million in 2018.

The millionaires’ tax requires anyone earning more than $2.1 million a year to pay a state rate of 8.82 percent, rather than 6.85 percent, as is the rate for those making $40,000 per year. Gov. Cuomo has included a three-year extension of the sunsetting tax in his executive budget. In their one-house budget resolutions, the two legislative majorities took very different stances on the millionaires’ tax. Senate Republicans want to see the tax expire.

The Assembly majority on the other hand, proposes an expansion of the current millionaires’ tax with additional tax brackets for the mega wealthy who earn more than $5 million, $10 million, and $100 million a year. The Assembly budget resolution also included the mansion tax that de Blasio wants, with the chamber’s bill sponsored by Brooklyn Assemblymember Steven Cymbrowitz, who chairs the housing committee.

Speaker Heastie called the tax plan “fiscally and socially responsible.” "A tax for New York City’s highest earners to help fund critical services like education, healthcare, and infrastructure,” Heastie said, “is more important than ever as we are starting to see the true devastating effects of the radical leadership in our new federal government.”

Cuomo, who wields significant influence in the deliberations over the state budget, made no mention of the mansion tax in his executive budget plan, and though he wants to extend the millionaires’ tax, he has expressed concern that expanding it as the Assembly has proposed could drive New York City’s wealthiest from the city.

“People will take a certain amount of abuse and then there is a point,” Cuomo said during a meeting with the New York Daily News editorial board. “The question is, what is that point? Nobody knows for sure, but you don’t want to reach that point.”

Prospects for de Blasio’s mansion tax appear grim without the support of the governor, and given fierce opposition from Senate Republicans -- Majority Leader John Flanagan has declared the mansion tax a “non-starter.”

Yet, de Blasio offered a series of points in arguing that the mansion tax is very much alive in the final week of budget negotiations.

At a press appearance after the rally, de Blasio said he is confident support from civil rights groups and senior organizations like the AARP will have a mobilizing effect on the governor and Legislature. “AARP has enormous power to influence people on both sides of the aisle,” he said.

Addressing naysayers, de Blasio reminded reporters that people used terms like “dead on arrival” about other progressive policy measures he’s championed in Albany, such as the city’s universal pre-kindergarten program, a $15 minimum wage, and paid family leave, each of which was passed in some form.

De Blasio also revealed that a Senate version of the mansion tax bill would be introduced by Senator Diane Savino, a member of the Independent Democratic Conference (IDC) whose district includes a sliver of southern Brooklyn and parts of Staten Island. “We think with her leadership, that will help us to draw more support in the Senate and continue this momentum,” de Blasio told reporters.

The eight-member IDC has a coalition agreement with Senate Republicans and the IDC is often able to push through its pet agenda items because of the leverage it has with the majority.

When asked how she would get the GOP conference on board with the mansion tax, Savino said via email, "Like all legislation that I carry, I plan to lobby my colleagues on the mansion tax which could bring needed revenue to the city."

Senate Republicans, who cling to a sliver of a majority in the chamber, appeared to be unmoved by the groundswell.

Senate GOP spokesperson Scott Reif did not respond to a request for comment but tweeted at a Politico reporter Wednesday morning, writing, “Appreciate that @BilldeBlasio can still find his way to Albany, but this idea has already been rejected.”

Later, Reif added in response to a Gotham Gazette reporter, “We support cutting taxes, not raising them.”

Cuomo was in New York City during the Wednesday rally for the funeral of legendary New York Daily News journalist Jimmy Breslin. While Cuomo and de Blasio are engaged in a long-running feud, de Blasio acknowledged that he needs the backing of the governor to get the mansion tax passed. De Blasio urged Cuomo to consider the senior citizens who stand benefit from the rental subsidy the tax would fund.

The expansion of the millionaires’ tax and creation of a mansion tax would signal wins for the first-term mayor, who is up for reelection this November. De Blasio, who has been talking up the mansion tax since 2015, again laid out his case last week while on WNYC’s The Brian Lehrer Show, putting it into the larger context of his fight against inequality, especially in the Trump era.

“That is the kind of thing – bluntly – that we’re going to have to do. And if we don’t start addressing this reality of a growing senior population needs affordable housing we will rue the day, and the way we do that is by taxing the wealthy in fair ways and devoting those resources to senior housing,” de Blasio said in the March 10 radio interview.

On Thursday, de Blasio is scheduled to be back in New York City, visiting two senior centers to promote the mansion tax proposal.