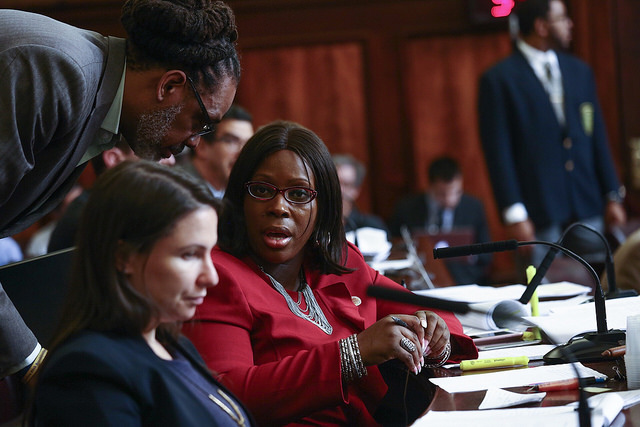 Several themes emerged during the hearing chaired by Council Member Vanessa Gibson, chiefly the issues of salaries for the offices’ hundreds of assistant district attorneys, the entry position for much of the essential staff; the ongoing opioid crisis and its public health and budgetary implications; and the efficiency and speed of the criminal justice system.

Also looming were potential state and federal budget cuts; Manhattan D.A. Cyrus Vance Jr. said that his office “could be losing $675,000” in federal grant money and an additional $500,000 in state funds, a burden that the city may have to shoulder.

Prompted by a question from Queens Council Member Elizabeth Crowley, the D.A.s and their representatives stated that the range of salaries for entry-level A.D.A.s went from $60,000 in Brooklyn, the lowest paid, to $68,000 on Staten Island. All said that they needed to raise those numbers to combat what Leroy Frazer Jr., chief of staff to Acting Brooklyn D.A. Eric Gonzalez, called “record attrition.”

“Are they going to white-shoe firms? No. To Fortune 500 companies? No. They’re going other city and state agencies...that pay better,” said Bronx D.A. Darcel Clark. Each office is seeking additional funds for A.D.A. recruitment and retention, with the Brooklyn office seeking the most, at $1.8 million.

The subject of the city’s opioid problem was discussed at length. Steven Goldstein, Chief Assistant District Attorney with the Office of the Special Narcotics Prosecutor, called the popular synthetic opioid fentanyl, which in some forms can be 10,000 times more potent than morphine, “truly a game-changer.” Overdose deaths have increased for six consecutive years in all five boroughs. Mayor Bill de Blasio recently announced a new plan to reduce those deaths.

Staten Island D.A. Michael McMahon, who tied drug crime to domestic violence and crimes against children, touted the importance of the Heroin Overdose Prevention & Education (HOPE) program. “We need to get people in the throes of addiction into treatment earlier,” he said. In response to a question from Minority Leader Steven Matteo, a Staten Island Republican, about the use of naloxone, a drug that is used to cut short overdoses, McMahon said the drug was “saving lives” and that he and his public safety colleagues “understand the public health aspect of this issue.”

Other common budgetary requests centered around upgrading computer systems and finding suitable office space, with Frazer stating that the Brooklyn D.A.’s office had been run out of the same office space for almost 20 years. The Queen’s D.A.’s office’s budget presentation included a $3.8 million request for upgrades in network infrastructure, including cabling, power supplies, and network hardware like routers.

In general, the five D.A. offices have budget allocations that vary widely.

In a notable exchange, Brooklyn Council Member Robert Cornegy commended Vance for charging white supremacist James Jackson with murder in the first and second degrees as an act of terrorism. Jackson, who is white, came to the city from Baltimore with the intention of killing black men, resulting in the stabbing death of 66-year-old Queens native Timothy Caughman. Cornegy called the charge “landmark” and asked if Vance had received pushback from colleagues at the federal level. Vance indicated that he had not.