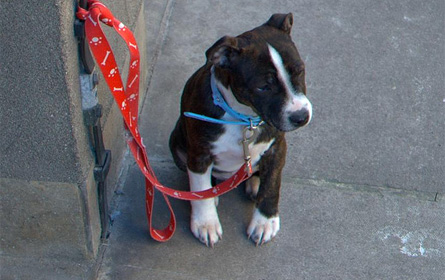 Photo by Nick Veitch
A City Council bill would require that this dog and other tethered animals be untied -- after three hours.

The City Council unleashed its ire on dog owners who tie up their canines outside for hours on end yesterday by approving legislation to prohibit tethering for more than three consecutive hours.

The bill (Intro 425), which was approved by a vote of 47 to 1, would not only ban dogs from spending long hours tied up outside, but it would also force owners to tether their animals humanely for short periods.

Pointing to images of dogs in New York City with gashes along their necks from being tied up with chains, Council Speaker Christine Quinn said the legislation would target dog owners who systemically tie up their pit bull, yorkie or mutt outside.

"This chain is embedded in the dog's skin," said Quinn looking at the graphic images. "We really don't have tough enough laws on the books to prevent this."

The only council member to vote against the bill was Councilmember Charles Barron of Brooklyn.

The council also approved legislation (Intro 328-A) by a vote of 41 to 7 that would drastically increase licensing fees for owners who refuse to get their animal spayed or neutered.

Who Let the Dogs Out?

Under the tethering law, owners could tie up their pet when running into the grocery store or when having brunch at a sidewalk cafĂ©.

An owner also could keep a dog tied up for nearly three hours, take them off of the restraint, then put them back on later, officials said. The bill, council members said, is meant to send a message.

"This is a really good step. â€¦ It will help educate people as to the ills of tethering," said Michelle Villagomez, the senior manager of New York City advocacy for the ASPCA. "We hope to be able to continue this dialogue." Villagomez said in an ideal world owners would not be allowed to tie up their animals outside at all.

To ensure any tying up be done humanely, the bill bans the use of restraints that are too heavy, like steel chains, or that could easily become entangled. It would also prohibit the use of choke or pinch collars.

Enforcement of the bill will be complaint driven and under the jurisdiction of the Department of Health and Mental Hygiene, officials said. Agents of the ASPCA will also be charged with enforcement. For all of the five boroughs, the ASPCA has 20 agents.

While the tethering bill received support from the vast majority of council members, legislation to increase licensing fines for dogs not spayed or neutered was more controversial. One council member called it a "regressive tax increase."

"I really don’t feel like spending $68 [to] license my dogs to stay in my house and stay in my yard," said Councilmember Dan Halloran, a Republican of Queens. "Now we are taxing our dogs."

Under the bill, anyone who refuses to spay or neuter his or her dog will pay $34 for a license instead of $11.50. The excess funding will go to a fund to subsidize animal control programs.