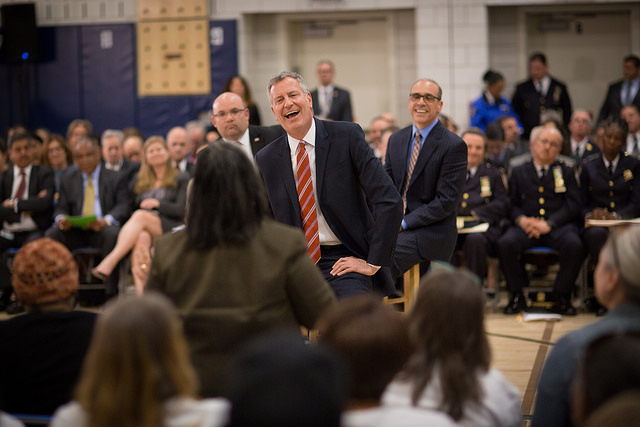 Mayor Bill de Blasio will be on Staten Island this week in the first of five “City Hall in Your Borough” sojourns wherein the mayor, who is up for reelection this fall, is bringing city government local. De Blasio, many of his commissioners, top aides, and City Hall staff will work out of borough hall, hold constituent office hours and a variety of events on the island, and attempt to immerse themselves in borough issues for the week.

The mayor chose to start the initiative on Staten Island, the only borough the first-term Democrat lost in his landslide 2013 victory. De Blasio’s week will include a town hall Thursday night, but begins Monday with several events, including a morning cabinet meeting with senior staff at borough hall, a noon press conference related to neighborhood policing, and a 10 p.m. visit with a road re-paving crew.

According to the mayor’s office, de Blasio will set aside time to meet with local constituents and groups, visit at least one house of worship, and make many other stops around the borough. He is expected to hold events with each of Staten Island’s three City Council members, and to spend a good deal of time with Borough President James Oddo, a Republican whom the mayor has a close relationship with. First Lady Chirlane McCray is expected to hold events related to ThriveNYC, the mental health program she spearheads.

The mayor will be commuting to Staten Island from Gracie Mansion, his office said, not spending overnights on the island. [The Staten Island Advance acquired a draft schedule for de Blasio’s week, though it is unclear how closely his actual plan will match it. The launch of the overall initiative was first reported by The Daily News.]

De Blasio’s week on Staten Island is sure to deal with some broad citywide themes like public safety, education, affordable housing, and development, but will also have a distinctly local feel. As borough officials often say, Staten Island is more like the rest of the United States than it is the rest of New York City. Staten Island has high homeowner and driving populations compared to other boroughs, for example. Many Staten Islanders also continue to battle their way back from Superstorm Sandy and there has been a good deal of frustration about the city’s Build It Back recovery program. The borough is also dealing with the opioid addiction and overdose problem that has spread throughout communities across the country.

After Staten Island, “City Hall in Your Borough” will proceed to the other four boroughs throughout the year, all as de Blasio competes in the Democratic primary and, likely, general election in his pursuit of a second term. Asked about the initiative coinciding with election season, mayoral spokesperson Jessica Ramos said that “It's coinciding with spring” and that the administration wants New Yorkers to interact with their local government in their own neighborhoods. ‎”We'll be doing this again over following years,” she said in an email.

The mayor and his team are likely to work out of borough hall in Queens, Brooklyn, and the Bronx, according to The Daily News, but will seek uptown space in Manhattan given that City Hall and the Manhattan Borough President’s offices at 1 Centre Street are so close to each other.

Asked about the initiative, Brooklyn Borough President Eric Adams had praise for de Blasio, but said in a statement that while he “would welcome Mayor de Blasio and his team to Brooklyn Borough Hall with open arms for this initiative...it would be even more impactful for us to work together on bringing City Hall to neighborhoods like Brownsville that have a real need of this presence. A site such as the Brownsville Recreation Center, for example, would serve as a great hyperlocal hub for this effort."

Adams said City Hall in Your Borough is “a smart concept to get government out of the austere structures that often separate it from the communities it serves.” According to his office, borough specific issues Adams wants to see City Hall focus on include affordable housing, tenant harassment, civic tech innovation, preventive health care, school tech infrastructure, among others. Adams also wants to see city agencies rethink community engagement models.

In a brief interview, Manhattan Borough President Gale Brewer said that her team and the mayor’s have been in touch already. Asked what the focus issues should be, Brewer said her office “gets a ton of housing, housing, housing” and that people really are concerned about both residential and small business affordability. Small Business Services, NYCHA, and the Department of Buildings were three city agencies that Brewer said the mayor’s team should be ready to prioritize.

As for space, Brewer said she is the only borough president without a grand borough hall, but that she is also the only one with a storefront presence. She said her office’s uptown satellite space on West 125th Street “is not huge but it can fit 25 or 30 people at a time. So, we'd love him to join us there. We also have an office at the Harlem State Office Building, which has, obviously, huge spaces. So, either one, I think, would be fabulous, and we'd love to host the mayor.”

A spokesperson for Bronx Borough President Ruben Diaz Jr. declined to comment on City Hall in Your Borough or to make the borough president available for a brief interview. Diaz Jr. has been an outspoken critic of de Blasio on several issues, and was considering challenging the mayor in the Democratic primary, but now plans to run for re-election. He is the only borough president that de Blasio is not on good terms with.

A spokesperson for Queens Borough President Melinda Katz did not return a request for comment. Katz praised de Blasio at a recent town hall event in Queens for delivering on universal pre-kindergarten, though she and many in her borough want to see more from City Hall on school overcrowding and have concerns about the mayor’s homeless shelter siting.

At a January event hosted by Crain’s New York Business, the five borough presidents gave their assessments of de Blasio and offered him advice for how to improve his relationships with their boroughs.

Oddo, who will host de Blasio this week on Staten Island, said he still wants to see a culture change at city agencies where rank-and-file employees feel more urgency to complete projects and make progress. “You want to have a legacy” as a mayor, Oddo said, “you have to change the culture of these agencies, and I don’t believe that’s happening.”

“He could do a whole lot better, in my opinion, in his messaging and communication to the people of the City of New York,” Diaz Jr. said.