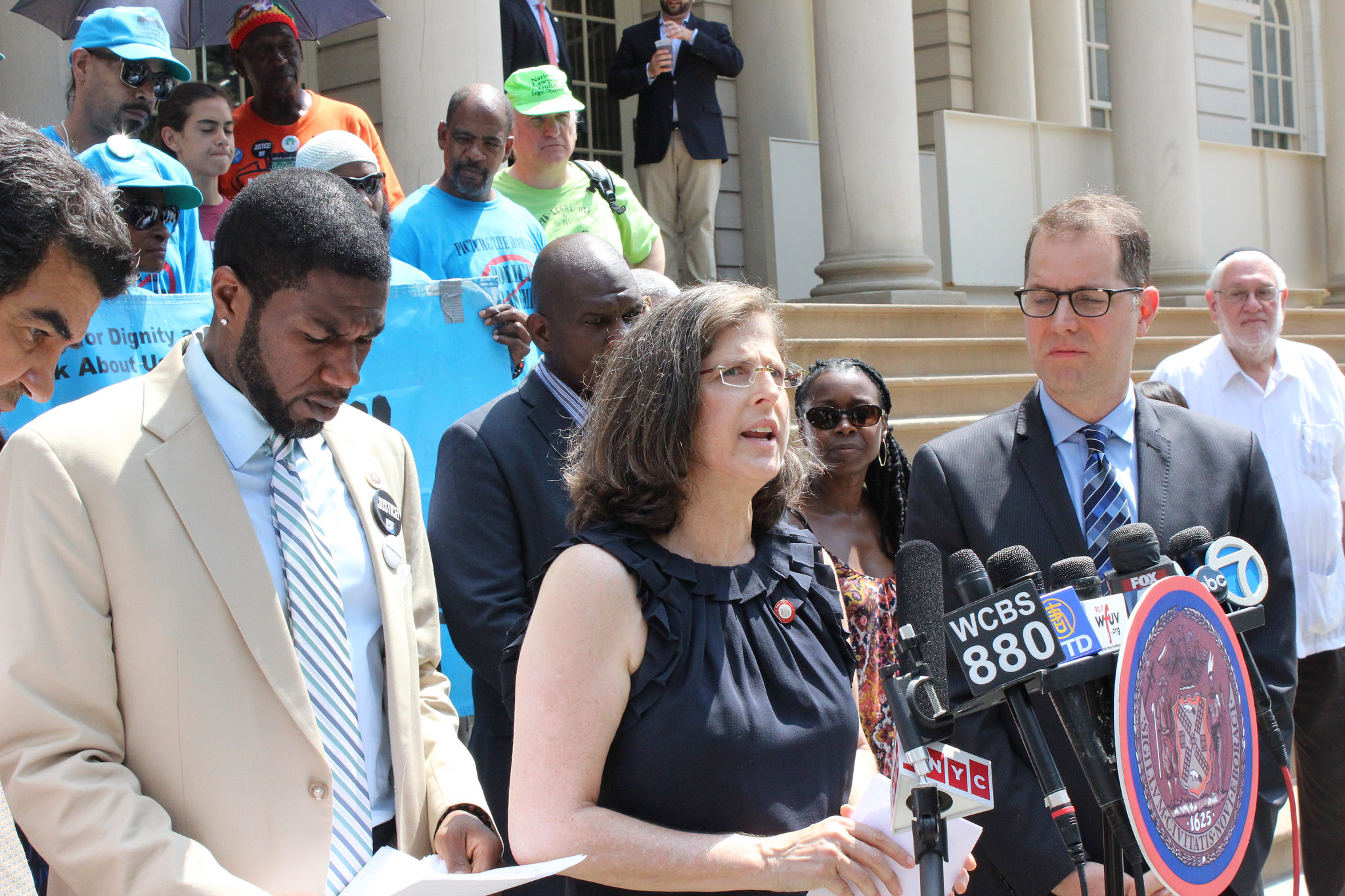 The City Council’s Committee on Housing and Buildings on Wednesday heard more than a dozen bills that would enhance tenant protections and combat abuses by landlords. Among those proposals was one that would create a new ombudsman within the Department of Buildings whose responsibility would be to prioritize the welfare of tenants when property owners and builders apply for construction permits.

The bill, Intro. 1523, was introduced by Council Member Helen Rosenthal last month and heard for the first time Wednesday. It would create an Office of the Tenant Advocate, charged with approving and monitoring tenant protection and site safety plans submitted to the Department of Buildings for construction work on occupied multiple dwellings.

The OTA would receive and redress complaints from tenants and would be required to publish quarterly reports on its work, including data on the number of complaints received, time taken to respond to complaints, and the number of tenant protection and site safety plans reviewed.

Rosenthal, a Democrat from the Upper West Side, said the OTA is a crucial tool to fight tenant harassment by landlords, particularly those who may use legally approved construction work to continually hassle and drive out rent-stabilized tenants. “Dealing with building owners who operate unscrupulously can be a Sisyphean task,” Rosenthal said in a phone interview, “and having more eyes on the ball can only help. Having an office or deputy commissioner on equal footing with other deputy commissioners at DOB will allow tenant voices to be heard.”

But her bill received push back from the de Blasio administration as well as the real estate industry, both of which argue that the OTA would be redundant. “While we generally support the bills discussed at yesterday’s hearing, we’re concerned that this particular legislation would duplicate work the Department already performs,” said Joseph Soldevere, a DOB spokesperson, in an email.

Soldevere said the department’s experts thoroughly examine tenant-protection and site-safety plans and, along with other agencies like Housing Preservation and Development (HPD), have a “robust system” for responding to tenant complaints. DOB also partners with HPD and law enforcement agencies, Soldevere added, in a joint city-state Tenant Harassment Task Force which has conducted more than 2,000 inspections since 2016.

Council Member Stephen Levin, a Brooklyn Democrat, is a co-sponsor on Rosenthal’s bill. He criticized the DOB’s often-delayed response time to complaints, calling them “totally ineffective” and insisting that the raft of proposals, dubbed the “Stand For Tenant Safety” package, was essential. “It’s important that agencies coordinate their actions in working with tenants,” he said.

The Real Estate Board of New York, the trade association that represents more than 16,000 members, including developers, property owners, managers and brokers, filed a legislative memo with the City Council committee on Wednesday, stating its outright opposition to the OTA bill and generally to the larger package of proposals.

“The creation of the Office of the Tenant Advocate within DoB might be a worthy endeavor,” the REBNY memo reads, “if the Office is devoted not only to protecting the interests of the tenant during construction, but also to assisting tenants with their responsibilities during such times.” It goes on to argue, similar to the administration’s stance on the bill, that other units within the DOB already cover the office’s proposed duties. They also insist that the bill should drop any references to site safety plans which are “technical documents requiring high-level expertise and developed to safeguard the general public and workers on-site, not specifically tenants.”

For Rosenthal, those concerns aren’t unfounded and she said she’s not looking to duplicate efforts already underway. Rather, she wants to streamline existing resources and prioritize the city’s response to tenant concerns. “Simply organize it in a fashion that would be more supportive for people going through construction, where construction is used for harassment,” she said. “What I’m trying to do is level the playing field within the DOB so that a tenant’s voice is heard as well as a building owners.”

The broader package of bills addresses a number of issues, with proposals including oversight of contractors that work without a permit; added requirements for information in tenant protection plans; a safe construction bill of rights for tenants; a rebuttable presumption of harassment for certain landlord actions; increased civil penalties for harassment and enhanced definitions of acts that constitute harassment; among others.

The package is also keeping in line with the City Council and Mayor Bill de Blasio’s increased focus on tenant protections, including the recently agreed upon “Right to Counsel,” which provides free legal representation or advice to tenants facing eviction. The mayor has pointedly cited his anti-eviction and pro-tenant policies as a significant part of his overall agenda to combat the city’s record levels of homelessness and affordable housing crisis.

Kerri White, director of organizing and policy at the Urban Homesteading Assistance Board, a tenant advocacy group, said the Office of Tenant Advocate would be a step towards addressing systemic issues that tenants face. “DOB still perceives each problem as its own island and that’s not the reality,” she said, emphasizing that the city needs a comprehensive approach that recognizes the larger context of tenant issues. She said HPD has in part embraced this need, after years of advocacy, but DOB lags behind. “Right now there’s no centralized person you can talk to,” she said. “You call 311 and put in complaints but those are not always effective.”