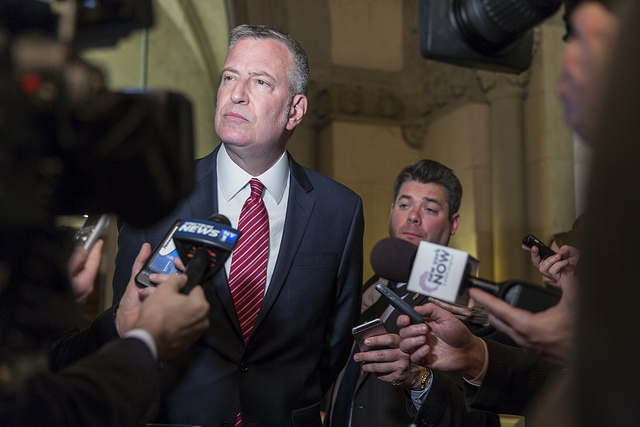 "It’s scintillating,” Mayor Bill de Blasio said wryly when a reporter asked if he enjoys taking questions from the press. The mayor left it at that and called on another questioner, toward the end of an open question-and-answer session that followed de Blasio’s announcement of new anti-smoking measures at a news conference last week.

Over the course of about 30 minutes of Q-and-A on any topics reporters wanted to ask the mayor about, de Blasio on Wednesday fielded an unusual number of questions, about five, on his approach to and relationship with the news media.

The theme is one that has boiled to the surface from time to time over de Blasio’s first three-plus years in office as the mayor has developed a reputation as a media critic; repeatedly stated his belief that his accomplishments are not highlighted enough in the news; limited the frequency with which he takes questions from the press corps that reports on him every day; and attempted to dictate which topics he’ll take questions on when he holds events open to the media.

“You guys have a job to do and I respect it,” de Blasio told another reporter at the press conference, when he was asked if he has adopted a “rose garden” strategy of ducking media questions, “but the first obligation that I have is to constantly inform the public, and there’s lots of ways to do that nowadays, and we’re using all of them. Do you think for a moment that the people of New York City don’t hold me accountable for anything and everything?”

De Blasio argues that his administration’s use of social media, his town hall events, and his other interactions with New Yorkers, in combination with some exposure to the news media, is a recipe for accountability. He also said Wednesday that he takes questions from the press more often than presidents typically do and more often than Governor Andrew Cuomo does.

The mayor’s limited time in front of the City Hall press corps -- the group of journalists whose job it is to hold him accountable -- is sufficient, de Blasio believes. He is not hiding from the press, he has “a strategy for communicating in lots of ways with the public.”

For about a year, de Blasio has held open press conferences once a week. They had been more frequent in the past, but the mayor changed course when news broke that he and his associates were under investigation by federal and state prosecutors (they were cleared of any criminal charges). Until recently, the mayor has often listed press conferences on his public schedule as allowing only questions on the topic at hand, a much-maligned construct that led to de Blasio parsing what questions qualified as “on-topic” and, recently, a bizarre news conference where the mayor walked off after refusing to answer about four questions not on the topic of his choosing. Since that event, de Blasio has either made announcements and not taken any questions at all, or he has made an announcement, taken questions on the topic of the announcement, and then opened it up to questions on other topics.

The weekly events where de Blasio takes questions on any topic can often last two hours or more, with the open Q-and-A occurring over the final 20 to 30 minutes. Those sessions are often tense, with the mayor appearing irritable and argumentative -- at times displaying the classic pugilism of a New York City mayor demanding fair treatment from a challenging group of reporters; at other times, de Blasio is dismissive, condescending, and sarcastic. He has largely shied away from holding press availabilities at City Hall, a staple of prior mayoral administrations.

The mayor now regularly makes policy announcements that are open to the press, but refuses to take questions, as he did at multiple recent events during his “City Hall in Your Borough” week on Staten Island and on Saturday, Earth Day, when he announced a new “green jobs” program. The mayor recently spoke at the Fearless Girl statue in lower Manhattan, celebrating the symbol of defiance and fortitude, and did not take questions from the gathered press. In one especially surprising instance, de Blasio refused to speak with reporters after testifying at a state budget hearing in Albany in January (he had taken press questions at the same event in past years). At times, reporters shout questions at the mayor, which he ignores.

De Blasio has defended his media approach, saying that reporters can ask questions of his press office any time and that he takes questions from regular New Yorkers at town halls, which he has been holding across the five boroughs for the past year-and-a-half. The mayor also points to his weekly Monday evening television appearance on NY1’s Road to City Hall and Friday morning appearance on WNYC’s The Brian Lehrer Show -- during the latter, he often responds to a handful of listener calls.

But for the roughly 20 news outlets that cover the mayor on a daily basis, including Gotham Gazette, the mayor takes questions on any topic once a week for about 20 minutes. Asked by Gotham Gazette on Wednesday if that’s enough time, de Blasio said, “Sure, I think the fact is that you know you can ask any and all questions and get answers all day long from my press office, on where I stand on everything.” Despite the fact that this is often not true -- the mayor’s press office declines to comment on matters, gives vague statements, and provides sanitized remarks that the mayor himself may not give in real-time -- de Blasio said that “it’s very, very clear what my views are on things and how we respond to problems and challenges and issues that are raised, and so many other members of my administration that you’re speaking to.”

“I’m comfortable that kind of accountability is there, and again, that’s one part of it, you guys holding us accountable, and you do it all the time,” the mayor continued. “It’s also my obligation to talk to people, to let the people of the city know what we’re doing, and we do that in a myriad of ways. Respectfully, this is one of many ways to communicate with people. They’re all valid.”