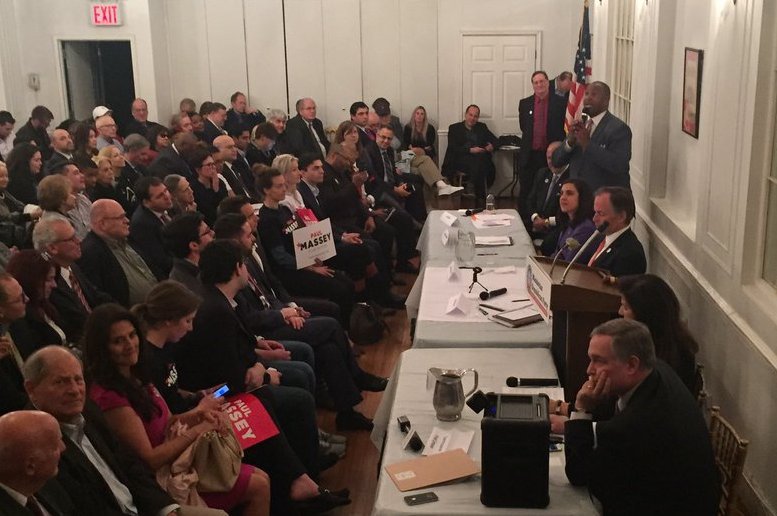 Candidates running, or hoping to run, for the Republican mayoral nomination made the case for their candidacies at a GOP forum in Manhattan on Wednesday night, pitching their qualifications and levelling criticism at Democratic Mayor Bill de Blasio. Indicative of de Blasio’s incumbent status and the nature of the opposition field, the event featured more criticism of the mayor than forward-looking policy talk.

The Metropolitan Republican Club, on the Upper East Side, hosted four candidates -- real estate executive Paul Massey, state Assemblymember Nicole Malliotakis, Harlem pastor Michel Faulkner, and retired NYPD detective and private investigator Richard “Bo” Dietl. The first three are registered Republicans and can compete for the nomination if they collect the required petition signatures, but Dietl is currently running as an independent and seeking a Wilson-Pakula certificate from Republican county leaders that would allow him to also run in the Republican primary. Dietl originally sought to run as a Democrat against de Blasio in the primary but made errors in his filing paperwork that precluded him from doing so and also left him out of the Republican Party, which he had been a member of for decades, he’s said.

Meanwhile, billionaire John Catsimatidis, who unsuccessfully sought the GOP mayoral nomination in 2013, was also in attendance Wednesday night. Catsimatidis has been exploring another run, but appears unlikely to enter the race. Malliotakis, who declared her candidacy this week, is close to Catsimatidis and has said she would step aside if he decided to run again.

“We are all here, united around one thing,” said Adele Malpass, chair of the Manhattan County GOP, in opening remarks. “It is to make Bill de Blasio a one-term mayor.”

Malpass said a Republican candidate has a path to victory if they can pull together a broad and diverse coalition that includes Republicans, independents, 150,000 families on charter school waitlists, the orthodox Jewish community that voted for Donald Trump, common sense Bloomberg Democrats on the Upper East Side that voted for Joe Lhota, small business owners, and rank-and-file first responders. A Republican can reach 51 percent, she said, scoffing at perceived media skepticism over a Republican’s chances of beating de Blasio. “I can guarantee you tomorrow, when you look in the newspapers, the narrative is going to be ‘Oh they can’t win,’” she said.

Wednesday’s candidate screening was for Republican leaders from across the city to gauge the viability of each candidate, in part with an eye toward attempting to coalesce around a single candidate and avoid a primary battle that could be damaging to their side. Over the course of nearly two hours, the candidates were questioned on why they would appeal to voters and their positions on various policies and issues including the city budget, transit infrastructure, public safety, quality of life, Rikers Island, and the Campaign Finance Board’s public matching funds program. Save for a few occasional jabs, the candidates refrained from criticizing each other.

Just two minutes were given to each candidate on each issue, contributing to a lack of concrete policy proposals. More so, the candidates lobbed critiques, and at times insults, at de Blasio, met often by applause and jeers from the 100 or so people gathered.

Malliotakis is currently the only woman on either side of the mayoral race and the only Republican candidate to have held elected office -- she represents parts of Staten Island and a sliver of Southern Brooklyn in the state Assembly. She called de Blasio a “tax and spend” mayor who is throwing “good money after bad money,” citing the significant increase in the city’s budget in the last three years. “I believe that we can change the direction of the city,” she said. As a daughter of immigrants and a Latina, she said, she’ll be able to pull votes from the Democratic base, and she was confident that she’ll be able to raise significant funds for her campaign, enough to meet the thresholds for the public matching funds program which gives 6-to-1 funds to each contribution up to $175.

“I’m not a big money politician,” said Michel Faulkner, who has so far struggled to raise funds, lending his campaign much of his own money and outspending what he has raised. But, as an African-American candidate, he believes he can build groundswell support and appeal to cross-party voters, particularly African-Americans and Hispanics. He prodded his fellow candidates, joking about Bo Dietl’s shifting party affiliation and taking a swipe at Massey for his maximum donation to de Blasio’s 2013 campaign, and made eye-catching, possibly tongue-in-cheek, policy pronouncements like vowing to put a homeless shelter in City Hall and an airport in every borough.

Massey, who so far has led the race in fundraising and spending by wide margins, called de Blasio corrupt and an “Olympic-level failure,” and said he would beat the mayor with a “legendary campaign” built on a massive ground game. Massey, who made millions in his real estate sales business, which he sold a few years ago, won’t be participating in the public matching funds program, since he doesn’t want to limit his spending, and has criticized the mayor for being a participant, since it means taxpayer money will go to his campaign. He expressed confidence that the party will eventually rally around him, since he also has the Independence Party’s endorsement and can build a fusion candidacy.

Massey, whose business operated across the five boroughs, lived in Westchester until recently, moving to the city in time to register to vote in last year’s presidential election (he has said he wrote in Michael Bloomberg for president) and to begin laying the groundwork for his mayoral campaign. NY1 reported that Massey rarely voted in Westchester over 20 years, which the candidate attributed to his busy work schedule. Massey is the only Republican candidate who has begun to lay out detailed policy proposals, though he has yet to show a strong command of city government or speak fluently about the nuts and bolts of policy. He is billing himself as an expert manager and above reproach ethically, both of which he contrasts with his criticisms of de Blasio.

Perhaps the most animated speaker of the night was Dietl, who said he could appeal to all New Yorkers as socially liberal and fiscally conservative. “I’m not beholden to any special interest group, and I’m not a career politician,” he said. A brash, tough-talking candidate, Dietl turned red with his varied and colorful critiques of the mayor. More than a few times he called de Blasio “Big Bird” and said the city was turning into a modern day Sodom and Gomorrah under the mayor’s first term, citing topless street performers in Times Square (desnudas) as illustrative of his point. He boasted that he could tap his numerous wealthy friends to fund his campaign and that, even though he tried to run as a Democrat, he is a Republican through and through. Dietl promises to be tough on crime but with a big heart. He also promised to rip out the city's bike lanes.

At one point, Dietl made an apparently racist remark when relaying the story of his appearance before a judge to appeal his registration in the Democratic Party. The judge, Debra James, he said, looked just like First Lady Chirlane McCray and he knew he was in trouble when he saw her. James and McCray are both African-American. Dietl later attempted to clarify, insisting that his comments were not meant to be racist and that the two did indeed look alike. He continued to stress the point on Thursday amid a storm of negative attention to the remarks.

On most issues, there was little daylight among the four. They all oppose the decriminalization of low-level offenses, critiqued the soaring city budget, hammered the mayor on the city’s homelessness crisis and decried his transit policies and the MTA (which the mayor often reminds people is actually controlled by Governor Andrew Cuomo). On certain policies they varied, albeit slightly, such as the closure of the Rikers Island jail complex. For instance, Faulkner supports reforming it but not closing it, while Massey supports closing it but opposes community-based facilities being built in its stead -- he wants modern facilities built on the island.

“I don’t know if this provided enough clarity tonight,” Malpass told Gotham Gazette, after the forum. “I was hoping there might be someone who knocks it out of the park and we would all coalesce. I think this kind of confirmed more opinions that people had. If you had a preconceived idea about each candidate, that kind of reinforced that.”

Malpass has been among the county chairs for the GOP interested in coalescing behind one mayoral candidate and pushing others out of the race, so that all resources can be focused on defeating de Blasio. She said Wednesday night that the next campaign finance filing, due May 15, might shed more light on which candidate is doing well on fundraising. Besides, she said, there are four valid candidates and other citywide nominees -- public advocate and comptroller -- to choose as well.

In the mayor’s race, however, “We might have a primary,” she said. “I don’t know if we can prevent it.”