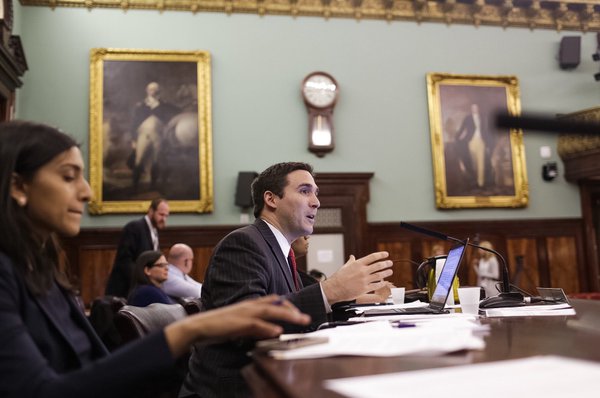 A bill heard by the City Council’s Committee on Governmental Operations on Thursday aims to further limit the influence of big-dollar donations and special interests in city elections. The bill, co-sponsored by Council Member Ben Kallos, who chairs the committee, would tweak the city’s public campaign finance system by removing a cap on public funds disbursed to candidate campaigns by the Campaign Finance Board (CFB).

The city’s campaign finance system is held up as a national model that incentivizes small dollar donations by matching them with public funds. Each qualifying contribution up to $175 is matched 6-to-1 by the city, through the CFB, allowing candidates with a lack of access to personal wealth or deep-pocketed donors to run competitive campaigns. Currently, the CFB only matches public funds up to 55 percent of the spending limit for a particular seat.

For instance, in a City Council race, for those participating in the matching system, the 2017 spending limit is $182,000 each in the primary and general election, so a candidate could receive up to $100,100 in public funds by raising about $16,800.

Intro. 1130-A, co-sponsored by Council Members Kallos, Brad Lander and Fernando Cabrera, would increase that public funds payment to a full match against the spending limit, minus the amount of matchable contributions raised by the candidate. Effectively, a Council candidate who raises $26,000 could receive a maximum of $156,000 in public funds, for a total budget of $182,000 (in the primary and/or in the general).

If passed by the Council and signed by the Mayor, as written the bill would go into effect in 2018, after this year’s municipal elections.

The current system, says Kallos,, creates a “big money gap” of more than one-third of the spending limit, that would need to be filled through private contributions. For a City Council race, this gap is $65,000 while for mayoral candidates, it is about $2.5 million. “If it works, anyone could run for office entirely on small dollars,” Kallos said in his opening statement at Thursday’s hearing. “If it doesn’t work, candidates could still continue to pursue big money and there would be no added cost. There is literally no downside.”

The hearing drew a large audience outside of the usual good government advocates, including tenant and community preservation groups, immigrant advocacy organizations, NYCHA residents, current City Council candidates, and women’s groups. “This is because no matter what your cause, the road to victory starts with campaign finance reforms that amplify the voices of residents over special interests,” Kallos said.

Amy Loprest, executive director of the Campaign Finance Board, said the bill would have a significant impact on future elections, albeit with a moderate increase in costs, about 17 to 20 percent. In 2013, she noted, 129 council candidates received public funds, and 83 of them received payments within 10 percent of the maximum. In citywide races, however, she said the impact would be minimal since candidates tend to rely on larger contributions, and it would in fact aid established candidates with stronger small-dollar fundraising operations.

Loprest said the Board agreed with the aims of the bill, but she offered a number of alternatives that could effectively accomplish its goals and even go further. She suggested lowering contribution limits across the board, reducing the thresholds for qualifying for public funds, and floated the idea of higher matching funds for those who choose to only receive small-dollar donations. She also pointed out potential inadvertent consequences of the bill, noting that there are strict criteria for qualifying expenditures under the public funds program, and more public funds could make it harder for candidates to justify spending on non-qualifying purposes such as defending a ballot petition in court. Candidates would also have to repay higher amounts of public funds left over after a campaign.

When asked by Kallos how the bill might affect participation in the system, Loprest emphasized that participation has consistently been high, but future behavior is hard to predict. “You want to make sure you have a system where it’s flexible, so you have as many people joining as possible and that they can choose the way they want to participate,” she said. “Allowing people to kinda have the option of the way they can participate in the program is an important aspect to encourage participation.”

A number of government reform advocates came out in favor of the legislation including Common Cause New York, EffectiveNY, Reinvent Albany, and Demos, among others.

“It’s very clear that the campaign finance system here in New York City has successfully encouraged more small-dollar contributions,” said Susan Lerner, executive director of Common Cause New York. “but for the long range goal of diminishing the power of large contributions, it is not as successful as we would like it to be.” She said Intro. 1130-A would be a “significant and strong first step” in strengthening the system.

Bill Samuels, chair of EffectiveNY, said the bill would encourage participation by women candidates, who tend to rely more heavily on small-dollar contributions because they don’t have the access to deep pockets that men often do. EffectiveNY, with Council Speaker Melissa Mark-Viverito, recently launched the “21 in ‘21” initiative to elect at least 21 women Council Members in 2021 (there are currently 13 in the 51-seat Council). Moira McDermott, executive director of the initiative, said fundraising is often a significant barrier to women running for elected office. The gap between public funds and the spending limit, she said, is tough to cover through small contributions. “This leaves wealthy donors, political institutions, PACs and special interests, which after decades of the male-dominated structure, few women have the same connections to, and even fewer women of color.”

The bill also received supported as a means to increase class and racial diversity in the Council. Murad Awawdeh, director of political engagement at the New York Immigration Coalition, said, “Perhaps the most important potential impact of this legislation is that it would empower immigrants, low-income earners and people of color, and women, to run for office and seek adequate representation of their communities.”

One testifying organization seemed to demur on the proposal: Citizens Union, a government reform group, which is questioning the timing of the proposal and the financial and documentation requirements it would impose on the CFB. “Despite its intent,” said Rachel Bloom, director of public policy and programs, “the introduction of the bill at this late stage in the municipal election cycle is a deviation of the carefully measured process by which the program is updated and revised.” The group did not state support the proposal, nor did it oppose it. “There are serious issues being raised by this bill that need greater time to evaluate,” Bloom said. “We would be better off looking at the issue right after our 2017 city elections.”

Speaker Mark-Viverito has not yet taken a position on the bill, and said Tuesday that she would wait until after the hearing. In a statement Wednesday, she said, “The city's campaign finance law is one of the strongest in the nation. We continue to look for ways to make it even stronger.”

At Thursday’s hearing, Kallos read out part of written testimony submitted by Henry Berger, special counsel to Mayor de Blasio. “After nearly three decades of experience with the city’s matching public funds, this bill starts an important discussion about how to reduce the influence of money in elections,” the statement read. “This is one good step in that direction.”