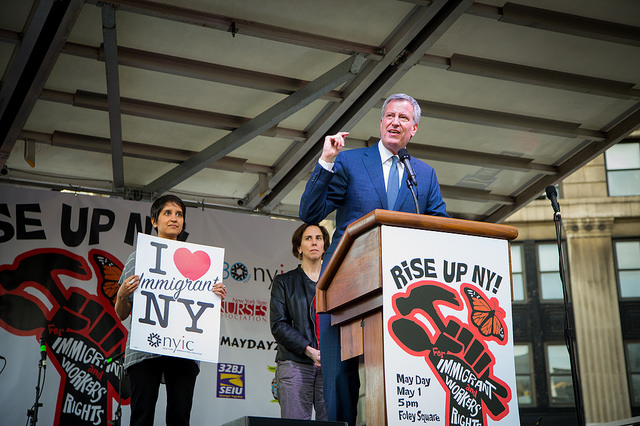 The city is expanding an existing free legal-aid program for immigrants that was set up two years ago but has now gained particular importance under the Trump administration and a Republican-led Congress threatening to impose immigration policies that could affect thousands of New Yorkers.

The ActionNYC program, run by the Mayor’s Office of Immigrant Affairs, provides free legal screenings to determine if immigrants qualify for city benefits and also aids immigrant New Yorkers in preparing and applying for work permits, residency and even citizenship.

MOIA is now partnering with NYC Health + Hospitals, the city’s municipal health care system, and LegalHealth, a division of the New York Legal Assistance Group, to give immigrants legal screenings at health care facilities and to expand the agency’s legal training for community-based organizations (CBOs) that work with immigrants. The program expansion will formally be announced Thursday at a roundtable with the news media at City Hall. ActionNYC currently has a $7.1 million baselined budget, and the administration has proposed increasing that baseline by $900,000 for the 2018 fiscal year that begins July 1. By the end of the current fiscal year, the program will have served approximately 8,000 New Yorkers, according to MOIA estimates.

MOIA Commissioner Nisha Agarwal stressed that the program was needed now more than ever, and that the agency had seen a particular uptick in calls for ActionNYC appointments since January. “We’ve been encouraging immigrant New Yorkers to get legal screenings all along and certainly the current political climate...and the ramp up in outreach is driving people to seek legal assistance,” she said in a phone interview with Gotham Gazette.

Since the presidential election, New York City has seen a massive outpouring of advocacy and public sentiment in favor of immigrant rights. Activists and elected officials have consistently expressed concern about the Trump administration’s policies that are causing considerable anxiety among immigrant communities, including the city’s sizable undocumented population. Among the few steps the federal administration has taken, some less successfully than others, are an attempted ban on immigration from certain Muslim-majority nations in the Middle East, stricter vetting procedures in general for visa applicants, a ramp up in immigration enforcement action and deportations by federal officials, and a thus-far unsuccessful executive order aimed at cutting federal funding to so-called sanctuary cities like New York.

New York City government has responded in force, with top elected officials vowing to stand up to federal authorities. Mayor Bill de Blasio and City Council Speaker Melissa Mark-Viverito have already taken steps to limit cooperation with federal immigration officials on immigrant detainees in city jails, and, building on a City Council program, the mayor recently announced a $16 million investment in legal assistance for undocumented immigrants facing deportation and other related legal challenges. The city has also implemented other immigrant-friendly policies in the last three years, including the popular municipal identification program, IDNYC, which was ostensibly set up to aid undocumented immigrants in accessing city resources and interacting with city government.

The expansion underway for ActionNYC, budgeted at $1.3 million from the agency’s current fiscal year budget, will cover three NYC Health + Hospitals facilities -- in Elmhurst, Queens; Lincoln, South Bronx; and Gouverneur in Lower Manhattan. The Queens site is already up and running, while the others will begin operations in the coming weeks. “Hospitals are places where many immigrant families are seeking services,” Agarwal pointed out, noting that some immigrants could potentially qualify for health insurance but may be unaware.

ActionNYC will also award 20 fellowships to 17 community based organizations (CBOs) to bolster their legal aid activities, particularly for growing immigrant populations and “hard-to-reach and recently arrived populations from Africa, Asia, and the Caribbean,” according to a MOIA advisory. The CBO trainings will run from May through June. “We want to create a pipeline for those communities to access more city dollars,” Agarwal said. These CBOs, she said, have stronger ties to immigrant communities and are trusted by the people they serve, making it crucial that they have the capacity to meet an ever increasing demand.

“I think we’ve seen a huge need for that,” Agarwal added,” and we’re stepping up to meet that need.”