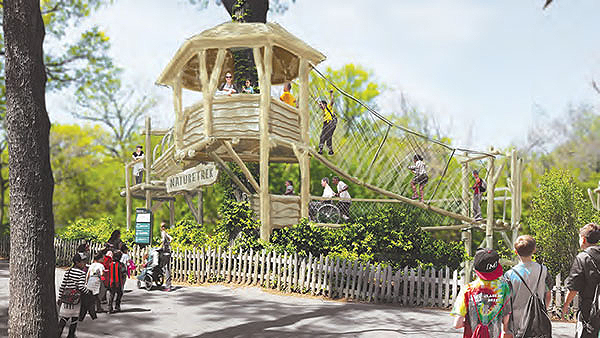 Mayor Bill de Blasio is set to announce the winners of this year’s NYCxDESIGN competition, “New York City’s official celebration of design” that takes place each May and honors proposals to improve the city.

The awards are given out by the Public Design Commission; the contest itself aims to elevate artists and celebrate art that beautifies the city, enhances public space functionality, or improves the city in some other way. This year, the 35th for the competition, the eight winners are designs that help further the mayor’s sustainability initiative, OneNYC, as well as promote and preserve city history, and enhance neighborhoods.

“The best public projects and spaces are purposeful and use design to build a sense of community and civic pride,” Mayor de Blasio said in a statement to Gotham Gazette. “We commend the teams behind these critical and creative projects that will help build a stronger, more equitable city and improve services and recreational activities for every New Yorker.”

The de Blasio administration will formally announce the winners on Thursday. The designs come from across all five boroughs, in all shapes and sizes: from an NYPD bomb squad building to a library, a zoo zipline exhibit to an entire neighborhood. All the winning projects are already in motion, the awards honor the designs. 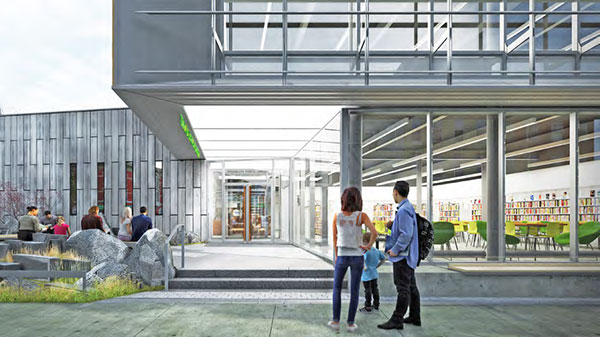 One winner is the Greenpoint Library and Environmental Education Center, in the eponymous Brooklyn neighborhood. The Greenpoint Library was originally funded by a donation from 19th century industrialist and philanthropist Andrew Carnegie, who backed many of the city’s public libraries. However, by the 1970s, it was in such a state of disrepair that it had to be demolished and rebuilt. The current building is the smallest library by size in Brooklyn, but also one of the busiest.

Now, the library is being torn down and rebuilt again, this time as an environmentally-focused, sustainable structure. The new design calls for 15,000 square feet, more than twice the size of the current library, and features state of the art architecture, exceeds LEED silver standards for environmentally friendly buildings, and incorporates solar panels and rainwater harvesting into the structure. The new library will also serve as a center for environmental education and awareness for the community.

The new library, which is scheduled to be completed and opened in 2018, will cost $11 million. 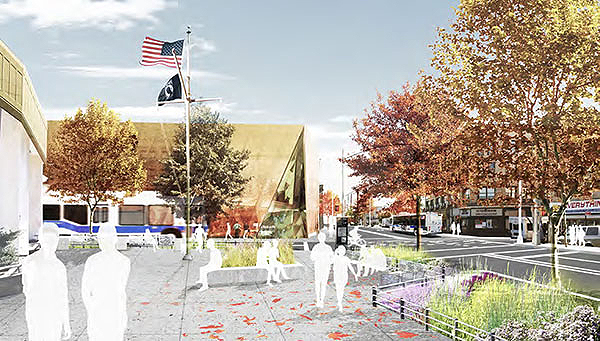 Another winner is the “Downtown Far Rockaway Streetscape,” running along Mott Avenue between Beach 19th Street and Beach 22nd Street, as well as a portion of Central Avenue. Far Rockaway was impacted immensely by Superstorm Sandy, with thousands of homes being destroyed or heavily damaged from either flooding or fires.

The new design will attempt to help revitalize the downtown area, which is seeing major investment from the city. Aspects of the design include a replacing a parking lot adjacent to the Mott Avenue A train station with a public plaza that will accommodate community gatherings and green spaces. Aside from that, the design will incorporate sustainability elements such as new storm and sanitary drains, as well as LED lighting.

“By integrating key principles of good design with sustainable practices and materials, these projects will regenerate the city’s natural environment, improve services to the public, and offer inspirational artworks and educational programming,” Public Design Commission President Signe Nielsen said in a statement.

Another victor is the Treetop Adventure Zipline and Nature Trek at the Bronx Zoo, which will allow children (7 and up) to ride a zipline across the Bronx River. The exhibit, which is scheduled to open this summer, will allow guests to be at eye level with the top of the zoo’s large forest, while also giving unparalleled views of the river itself.

Also being honored, among a few projects receiving “special recognition,” is the work of Cornell Tech and the city’s Economic Development Corporation to restore and relocate three Works Progress Administration (WPA) abstract murals. The WPA was a New Deal era program employing millions of people to carry out public works projects. New York was the only WPA region to have abstract murals.

The murals were painted over multiple times since the 1950s and were forgotten until being rediscovered in 2001. Cornell Tech then took on the task of searching for the remaining murals. The murals will be reconstructed and showcased to the public.

“The exceptional work of these designers, artists, and city agencies prove that New York remains a global leader in art, design, public infrastructure, and improving the quality of urban life and the public realm,” said Public Design Commission Executive Director Justin Garrett Moore, in a statement.

The mayor will officially announce the winners of the 35th Annual Awards for Excellence in Design on Thursday. City Hall is also honoring the winners of the 34th awards, which were announced in November. The full list of 35th competition winners includes: