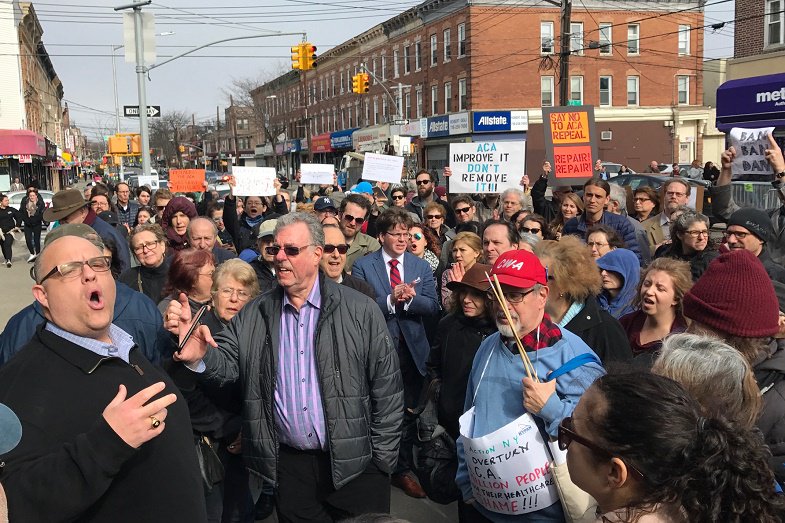 Primary day for this year’s citywide municipal elections is less than four months away and there are seven “open” City Council seats, out of 51, where the incumbent is term-limited from running again. Each race has numerous candidates, and campaign fundraising has heated up as the election draws closer. Most of the open seat Council races will be all-but-decided in the Democratic primary given the nature of the electorate in the districts at play.

City Council Members Rosie Mendez (District 2), Dan Garodnick (District 4), Melissa Mark-Viverito (District 8), James Vacca (District 13), Annabel Palma (District 18), Darlene Mealy (District 41), and Vincent Gentile (District 43) -- all Democrats -- cannot run for reelection this year with term limits forcing them out of office. In those districts, there will likely be the most competition out of all City Council elections this year, though a handful of incumbents are facing significant opposition. The City Council currently includes 48 Democrats and three Republicans.

In several of the “open” seat City Council races, sitting state legislators are either rumored or declared candidates. Compared to the state Legislature, the City Council offers far greater pay and a better commute than constant trips to Albany.

Although fundraising doesn’t reflect the entire state of a campaign, it is a window into the strength of a candidate’s popularity and an indicator of the resources they will have at their disposal. Funds are needed to help get a candidate’s message to voters, though candidates can accomplish a lot with limited financial resources, especially given the city’s public matching system. The Campaign Finance Board’s program, which provides 6-to-1 matching funds for qualifying contributions up to $175, also helps ensure that political neophytes and those with a dearth of financial backers can run a competitive race.

Gotham Gazette has tracked fundraising for the “open” Council races over the last two mandated campaign disclosures. The latest disclosures were filed mid-May, covering the period between March 12 and May 11.

A look at how the money race is shaping up in the seven “open” seats:

Council District 2, Lower East Side of Manhattan
District leader Carlina Rivera, legislative director for Council Member Rosie Mendez, has consistently led in fundraising in this race. She has $81,048 in cash on hand as of mid-May, having raised $120,571 and spent $39,523 since the start of the race. Rivera has been endorsed by Mendez, the Progressive Caucus Alliance (the political arm of the City Council’s Progressive Caucus) and by immigrant advocacy group Make the Road Action.

Attorney Mary Silver, a Community Board 6 member, is Rivera’s closest competitor financially with $74,531 in her campaign account. She has raised $90,083 in total and spent $15,552.

Ronnie Cho, a former staffer in the Obama administration, is third in cash with a balance of $61,884, having raised $100,801 and spent $38,917. Cho showed impressive fundraising numbers for the latest filing, raising $69,596 in just the last two months.

There are five other candidates in the race but none have raised enough funds for a serious campaign.

Council District 4, East Side of Manhattan
The race in District 4 will likely be one of the more competitive ones, with 12 registered candidates -- 10 Democrats and 2 Republicans -- seeking to replace Dan Garodnick. Although only a few have shown substantial fundraising, the public matching funds program may level the field for others.

Marti Speranza, a member of Community Board 5, remains on top financially with $176,409 in contributions and $64,472 in expenditure, for a campaign balance of $111,937. However, her fundraising seems to have slowed significantly from a few months ago -- she raised just $2,138 in this most recent filing period.

Political consultant Keith Powers has $98,080 in total contributions and $26,589 in expenditure, for a campaign balance of $71,491. Powers too has seemed to cut back on fundraising, pulling in only $3,860 in the last two months.

Bessie Schachter, who was most recently heading community outreach for state Senator Liz Krueger, has raised $61,011 for her race and spent $13,535, giving her $47,476 in cash on hand. Schachter is also a participant in the public matching funds program, which could mean that she could catch up with the money leaders in the race. (Other candidates can move to join the program before the June deadline.)

The nine other candidates are fairly far behind in fundraising. Outgoing Council Member Garodnick has not made an endorsement in the race.

Council District 8, East Harlem and part of the South Bronx
Four Democratic candidates have filed campaign disclosures for the District 8 seat, which currently belongs to Council Speaker Melissa Mark-Viverito. Diana Ayala, Mark-Viverito’s deputy chief of staff, who has the speaker’s endorsement, continues to be well ahead of the pack in fundraising, though this race was recently upended when Assemblymember Robert Rodriguez announced his candidacy.

Ayala has $52,089 in campaign cash as of mid-May after raising $58,752 and spending $6,663. Ayala was also endorsed by Make the Road Action and the Progressive Caucus Alliance.

Rodriguez jumped into the race two weeks ago and has $56,017 on hand after raising $78,647 and spending $22,620 (He was listed as 'undeclared' on CFB filings as of May 22). His candidacy caused a stir in the Bronx Democratic establishment which has split its support between Rodriguez and Ayala. Marcos Crespo, chair of the Bronx Democratic Party, endorsed Rodriguez on Friday soon after Bronx Borough President Ruben Diaz Jr. endorsed Ayala. Rodriguez also has the support of Council Member Bill Perkins, former U.S. Rep. Charles Rangel, and Manhattan Democratic Party Chair Keith Wright.

Council District 13, Eastern Bronx
District 13 features another crowded race with eight declared candidates and significant sums of money. State Assemblymember Mark Gjonaj has a commanding fundraising lead, having raised $352,200 in total and already spending $139,517, leaving a campaign balance of $212,684. Gjonaj was endorsed by the Bronx Democratic County Committee on Thursday.

Democratic District Leader Marjorie Velazquez -- who has been endorsed by current Council Member James Vacca, the Progressive Caucus Alliance, and Make the Road Action -- comes closest to Gjonaj in fundraising. She has raised $92,769 in total and spent $14,078, leaving her $78,692.

John Doyle, a former staffer for State Senator Jeff Klein, is behind Velazquez and Gjonaj, with $49,824 on hand after raising $70,056 and spending $20,232. But, through the public matching funds program, he may be able to close the gap. Most of his donations seem to qualify for the program’s thresholds.

Council District 18, Southeast Bronx
There was a shakeup in the District 18 race with the recent entry of state Senator Ruben Diaz Sr., a conservative Democrat. Diaz Sr., who holds conservative views on social issues, was able to quickly get his fundraising off the ground, raising $97,067 in just over a month, spending only $3,166, for a balance of $93,901.

Outgoing Council Member Annabel Palma has not yet endorsed anyone for the seat.

Council District 41, Central Brooklyn
Alicka Ampry-Samuel, chief of staff to Assembly Member Latrice Walker, who jumped to the front of the race in fundraising two months ago, remains the leader with $46,199 in cash on hand. She has raised $56,569 (including $15,000 she personally loaned her campaign) and spent $10,370. She’s also registered for public funds and could receive a significant amount from the CFB since most of her donations are below $175. Ampry-Samuel received Make the Road Action’s endorsement as well.

Behind Ampry-Samuel is Henry Butler, the district manager of Community Board 3. Butler’s campaign finances have changed little in the last two months. He has $18,588 left after raising $34,789 and spending $16,201, and is also participating in the public funds program.

District leader Cory Provost has a $10,349 campaign balance, while Kathleen Daniel, the preferred candidate of incumbent Council Member Darlene Mealy, has just $3,094 in the bank.

Council District 43, Southern Brooklyn
Justin Brannan, communications director for current Council Member Vincent Gentile, is back in front in funds in the latest filing period. He has raised $99,536 and spent $12,216, leaving him $87,320 in cash on hand. He has opted in to the public funds program.

In the previous filing period, Khader El-Yateem, the Palestinian-American pastor of Salam Arabic Lutheran Church, had overtaken Brannan with a sizable haul, but is now in second place in cash available. He has raised $93,630 and spent $21,940, giving him a balance of $71,690.

District 43 is one of the city’s rare, more conservative regions and is perhaps the best chance for another Republican to join the City Council. A number of Republican candidates are vying for the seat, led in fundraising by John Quaglione, deputy chief of staff to Republican state Senator Marty Golden. Quaglione’s campaign account contains $48,858, from $68,974 in contributions and $20,116 in expenditure.

Assemblymember Peter Abbate, who was rumored as another potential candidate, has all but ruled it out and it seems unlikely that he will jump in at this stage in the race.

Note - this article has been updated to include campaign filings for Michael Beltzer, a candidate for District 18, and for Assemblymember Robert Rodriguez, a candidate in District 8.