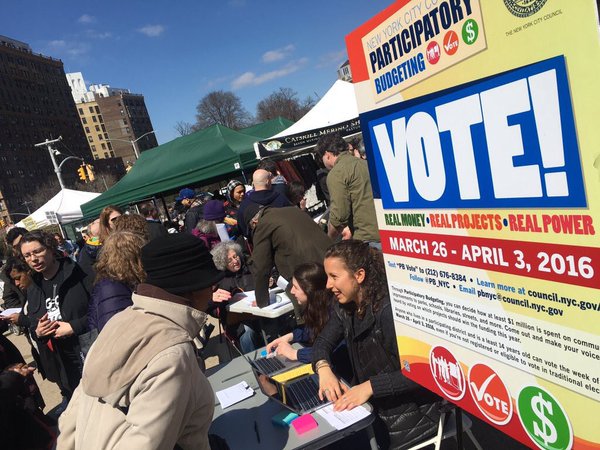 After an 11-day window in which over 100,000 residents of pertinent districts cast ballots, the City Council recently announced the winners of the 2016-17 participatory budgeting cycle. Thirty-one of 51 Council districts participated this year, leading to $34 million in capital funds going towards hyper-local projects chosen directly by the districts’ voters.

A total of 138 projects received funding in this cycle, with most districts backing three to five projects. Some districts awarded funding for many more projects -- District 38, which includes Sunset Park, Red Hook, and Windsor Terrace in Brooklyn and is represented by Democrat Carlos Menchaca, is funding 10 projects. Many project proposals were represented in multiple districts, such as laptops or air conditioning in schools and security cameras for places such as parks, schools, and police precincts, but many were more unique to the respective districts. While participatory budgeting funds are all for capital projects, like equipment or some kind of small construction work, and often show a lot of similarity to each other and to those funded in past cycles, a handful of winning projects stand out this year.

The participatory budgeting movement, which began in Porto Alegre, Brazil in 1989 as a means of decentralizing budgetary authority and handing power to the people, has since spread to numerous municipalities worldwide. It reached New York City in 2011, when City Council Members Brad Lander, Melissa Mark-Viverito, Eric Ulrich, and Jumaane Williams launched participatory budgeting projects in their respective districts, dedicating about $1 million of the funds at their disposal to a community process.

While it’s not required of all Council districts, and it hasn’t been implemented citywide, the movement is clearly growing at a rapid pace in the city. Districts participating in participatory budgeting set aside, at minimum, $1 million of their capital budget allocation for public determination.

Participatory budgeting allows issues unique to each community to gain both attention and funding from a city budget process that may have overlooked them without direct citizen input. For instance, one out of four public school classrooms in the city lack air conditioning, which can become not only a health hazard for both students and teachers, but also an impediment to effective learning in the later months of the school term, which ends on June 28 this year.

Several districts voted to allocate participatory budgeting funds toward putting air conditioning in classrooms devoid of it. As it turns out, Mayor Bill de Blasio announced that his executive budget proposal, unveiled last month, includes almost $29 million to put air conditioning in every public school classroom in the city within five years. Another long-requested but never-delivered service, bus countdown clocks, also won funding in numerous districts. The countdown clocks have a lurid history, with the MTA removing physical clocks from some stops upon the development of a BusTime app by the Authority, which can alienate low-income New Yorkers who don’t possess smartphones.

“This is democracy in action,” City Council Speaker Mark-Viverito said in a statement announcing the results of the cycle, getting at the essence of participatory budgeting, at least for its proponents.

While those like Mark-Viverito, dozens of other Council members, a variety of community groups, and many residents are pleased with participatory budgeting, some critics say that it is a waste of time and Council staff resources (it is a labor heavy program for aides to Council members) and that the projects funded are ones that should really be taken into consideration in the regular budget process. Critics say that Council members are supposed to be gauging their constituents’ needs year-round anyway and influencing the larger budget process and allocating their member item funding accordingly.

The City Council won the Roy and Lila Ash Innovation Award for Public Engagement for participatory budgeting in 2015 from the John F. Kennedy School of Government at Harvard, winning $100,000 as a means of “replication and dissemination of their innovations.”

This year’s participatory budgeting winners include many typical projects, but a few others stand out.

The highest number of votes for any project in the city went to a proposal in District 39, represented by Democrat Brad Lander, who has been a vocal proponent of PB since he was one of the original four to pilot it in the city. The votes were for providing mobile showers for homeless people. The project received 5,293 votes. The program is administered by CHiPS, a homeless services non-profit that runs a soup kitchen and a residency program, and will be stationed in front of its soup kitchen in Park Slope.

District 39, which includes parts of Park Slope and Gowanus, has a relatively low number of homeless shelter beds. It is one of 18 City Council districts without any family shelter units, but does have nearly 300 adult single shelter beds. Mayor Bill de Blasio may soon change these numbers given that his new homeless shelter plan includes opening 90 new shelters of various types across the city. He has promised more beds for Park Slope, where he used to live and was the City Council member before being elected Public Advocate, then Mayor.

Another winning project is the addition of a courtroom for Benjamin Cardozo High School in District 23, represented by Barry Grodenchik; the school is known for its Mentor Law and Humanities program. All students in the program must participate in either mock trial or model UN in their sophomore year. The courtroom will not be the first in a Queens high school; Maspeth High School opened a student courtroom in February of last year.

In District 22, represented by Democrat Costa Constantinides, the Steinway Branch of the Queens Library will be fitted with solar panels after receiving over 1,000 votes in the district’s cycle. The library will join several other public library branches in the city that have adopted solar energy.

The total votes in Constantinides’ district more than doubled since last year. Constantinides said this shows “that neighborhood residents care about our public and community spaces.”

And in District 32, represented by Republican Eric Ulrich (the only one of three Republican Council districts participating in the program), Shore Front Parkway will be the site of new adult exercise equipment “adjacent to the boardwalk” as well as a “labyrinth/yoga/meditation area.” Projects in Ulrich’s district received the fewest votes of any district participating in the program this year; only 858 votes were cast in total.

The full list of winners of New York City’s 2016-17 Participatory Budgeting Cycle can be found here.

Note: the article has been clarified to better explain the homeless shelter beds currently in District 39.