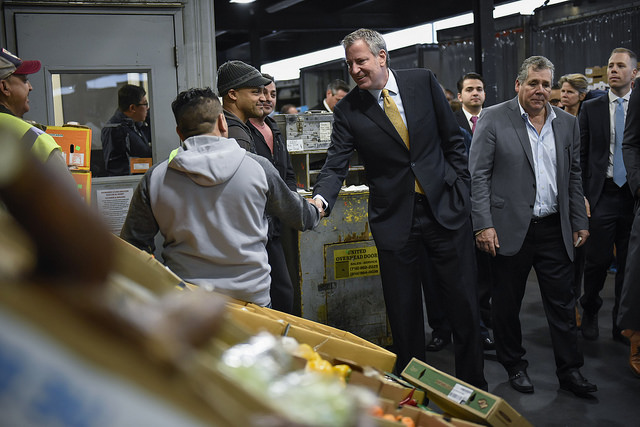 Kicking off his week in the Bronx, Mayor Bill de Blasio said May 22 that his administration’s efforts to fight inequality are working and that while unemployment has dropped significantly in the borough, there is more work to be done. “The Bronx has borne the brunt of that inequality crisis in many ways,” the mayor said, but what his administration is doing is “disproportionately benefiting the Bronx.”

The mayor told those sitting with him -- senior administration officials and Borough President Ruben Diaz Jr. -- and any others paying attention that his administration is focused on “maximizing economic opportunity.” “[N]ot just any jobs,” the mayor said, “but in fact an increasing focus on good paying jobs, which is what I devoted the State of the City to.”

De Blasio was referring to his February 13 speech, during which he announced that the city would invest in creating 100,000 permanent private sector jobs that pay more than $50,000 a year. It would be a ten-year plan, the mayor said, and while de Blasio offered a few examples of the economic sectors that would see some of that job growth -- tech, life sciences, renewable energy, manufacturing -- his announcement included few details. Soon after his State of the City, de Blasio explained that his administration would be releasing a detailed policy book, as it had done in 2014 with his 200,000-unit ten-year affordable housing plan and a few other major initiatives, to show where the jobs would come from and how.

On and off for several weeks, the mayor defended setting the 100,000 goal without a roadmap to get there, saying that it was the target city experts could ambitiously but reasonably forecast and that the specifics would follow. He also found himself defending it as ambitious enough -- critics pointed out that the city has been adding jobs at a much more rapid pace over the last ten years, but the mayor explained that job growth was already slowing and that he is focused on the wage threshold.

De Blasio has been asked about the plan, and when the public would see the details, at press conferences and his top aides were asked about it at multiple City Council budget hearings. At a late April news conference, Gotham Gazette asked when the jobs plan could be expected, whether it was imminent. “Not imminent in the sense of the next few weeks,” de Blasio said. “But, at some point this year I'll give you a better read on when."

At a May 9 City Council budget hearing, the head of the city’s Economic Development Corporation, James Patchett, told Council members that de Blasio administration officials are working diligently on the plan.

City Council Member Dan Garodnick, chair of the economic development committee, said, "We continue to have little clarity on the sources of jobs in the mayor's jobs plan.” Patchett said, “We can expect to have a plan very shortly,” but would not give an exact deadline, instead saying, “Certainly, I would love to have it come by the end of the summer. Hopefully sooner.”

As Garodnick pressed for details and whether the 100,000 goal is the right one, Patchett said, “I think you’re right to ask for the plan, I think when you see it you’ll be able to better judge that. Broadly speaking, the 100,000 jobs target is focused on the specific ways the city is encouraging job growth, as opposed to more broadly in the economy.” Almost 300,000 jobs were created over the last three years, he added, but what the de Blasio administration is focused on is jobs created through city intervention and at the “good paying” threshold of $50,000 per year.

According to City Hall, top de Blasio officials under Deputy Mayor Alicia Glen, who oversees housing and economic development, continue to meet weekly and a detailed jobs plan is indeed expected sometime this summer. Glen’s portfolio includes the Economic Development Corporation; Small Business Services, which runs workforce development programming; the Mayor’s Office of Media and Entertainment; and other agencies that will be integral to the jobs plan.

“Senior leadership from across the administration has met weekly on the jobs plan for months now, and our work is in an advanced stage,” said Melissa Grace, a de Blasio spokesperson, in a statement. “This is a major undertaking that will improve the earning power and professional opportunities of thousands of New Yorkers. From Vision Zero to ThriveNYC to Housing New York, we’ve consistently delivered on these big multi-agency initiatives because we take the time to do them right.”

The de Blasio administration has already released pieces of the plan, including an investment in the life sciences sector; manufacturing, garment, and fashion jobs in Brooklyn through enhanced use of both the Brooklyn Navy Yard and Brooklyn Army Terminal; and a new technology hub in Union Square. As those pieces and others have indicated, the plan will include both industry-specific initiatives and place-based efforts, leveraging city-owned land.

Another example was announced Tuesday, with the Economic Development Corporation releasing “the next phase of the Futureworks NYC advanced manufacturing initiative.” It will create more than 2,000 jobs over five years, the EDC announcement says, through “a series of partner networks and programs to increase access to advanced manufacturing technology, support startups, and help traditional manufacturing companies implement new technologies to help them remain competitive.”

De Blasio has repeatedly stressed that his government is investing and intervening in order to help New Yorkers find good-paying jobs, part of the mayor’s fight against inequality, attempt to make the city more affordable, and efforts to lift hundreds of thousands of New Yorkers out of poverty. While de Blasio has celebrated that unemployment in the city is hovering around an impressively low 4%, there are not necessarily enough middle-income private-sector jobs. The mayor argues that the city must take action to spur important types of job growth that will benefit New Yorkers.

But, as with many headline-grabbing announcements by de Blasio, the key will be planning, execution, return on city investment, and proper metrics for evaluating the program’s efficacy. It’s still not clear exactly how the 100,000 number was pegged.

When Gotham Gazette asked the mayor at a February news conference, he said, “The 100,000 plan emerged from looking at the strands that were already starting to move and asking how far we could take them, and what was a fair numerical stretch-goal to reach for. And that’s very consistent with how we did the affordable housing plan, how we did the pre-K plan – you name it. You know the question on the table is always what’s in motion, where can we take it, and then push it to its farthest extent. And I thought it was an important thing to focus on and really give people a sense of where we were going and what we could achieve.”

Pushed on whether the 100,000 number over 10 years is really a big goal, de Blasio said that critics are not really looking at the last 10 years fairly, noting that the economic crisis that began nearly 10 years ago made the subsequent job growth numbers unsustainable for many years.

“[W]e had huge job loss, and then we had impressive rebounding," de Blasio said. "We’ve gotten a little comfortable because we had such extraordinary success over the last couple of years. The first two years alone that I was in office was about 250,000 jobs. The difference now is the keep generating an intensive pace of job creation, but to focus more on the high-paying jobs. That’s going to take government stimulative effect, if you will. That’s going to take us doing smart, strategic things to keep growth high.”

EDC’s Patchett at the May 9 City Council budget hearing said the plan won’t “identify every sub-initiative of like 17 jobs here and 14 jobs there, because it’s over the next 10 years and...we need to be aware of the fact that the plan will change and the economy will change over time. But we are going to go sector by sector and talk about specific job targets and a series of specific initiatives that we can announce right away that will make up a significant portion of those jobs.”