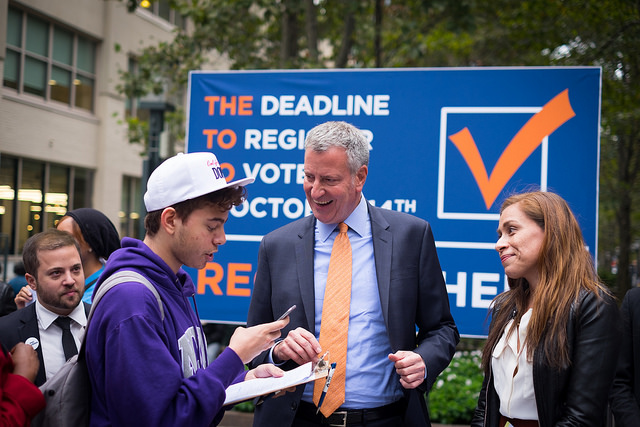 Mayor Bill de Blasio said on Wednesday that he is about to “launch a major effort” to see voting and election reforms passed in Albany by the end of the legislative session, which runs until the middle of June.

De Blasio, a Democrat running for reelection this year, has called for reforms like early voting and same-day voter registration that have stalled in the state capital. While the mayor has expressed his support for those and other changes to the state’s antiquated electoral laws, he has done little publicly to push such reforms.

Last year, with a great deal of attention on New York’s electoral laws due to frustrations around voting in the presidential primary, de Blasio held an October press conference to make clear that he favors a slate of electoral reforms and to say he would be part of a strong push to see them passed in Albany. (The event also coincided with the deadline for first-time voters to register to vote on Election Day in November.)

When Gotham Gazette asked on Wednesday about his near-silence on the issue since that October event and the dwindling window in Albany for this year, de Blasio said during a question-and-answer session with reporters that it’s exactly the right time to make an aggressive move to see reforms pass.

"You know plenty about Albany and this is when things start to happen,” the mayor said, referencing the fact that there is usually a grand bargain package of legislation that moves at the very end of the session each year in the capital. “So we're about to launch a major effort on that front, because I think people really want electoral reform in this state. And there's a chance to do it and it's about creating the pressure needed to achieve it. So, we're going to be doing a lot in the next few weeks."

Asked for more detail, a de Blasio spokesperson said there would be more unveiled next week. Sources in the state Legislature indicated to Gotham Gazette that de Blasio’s team has engaged in conversation about pushing electoral reform before the end of session.

Most of these electoral reforms have repeatedly passed the Democratically-controlled state Assembly, including this year, but they have stalled in the Republican-controlled state Senate. Good government groups and many reform-minded Democratic elected officials have rallied for change, but several of the state’s most powerful figures with the strongest bully pulpits -- de Blasio, Governor Andrew Cuomo, Assembly Speaker Carl Heastie, among them -- have mostly been quiet this year, both before and since a state budget was passed in early April that included a good deal of new policy, but no voting or election reforms. (Attorney General Eric Schneiderman held a press conference on electoral reform in February.)

As state budget negotiations reached their finale, Cuomo -- who had included an electoral reform agenda in his State of the State policy book unveiled in January -- said that voting reform was all but certainly not going to be included in the budget deal. It would most likely have to be part of the legislative session to follow, the governor said, indicating that the reforms were not a high priority for him. Known for aggressively seeking the policy changes that he wants, and mostly winning them, Cuomo has not held or attended a single public event on electoral reform. For 2017, he is not alone.

On Wednesday, Gotham Gazette asked de Blasio if he would be working with Cuomo, a second term Democrat seeking re-election in 2018 and whom de Blasio is engaged in a long-running feud with. "If the governor wants to work on that, I would certainly -- I'll work with anyone who wants to achieve electoral reform," de Blasio said.

A spokesperson for Cuomo, Dani Lever, issued a statement in response to a Gotham Gazette inquiry. “Since taking office, the Governor has repeatedly proposed voting reforms that have been opposed by the legislature and stalled during the budget process. We will continue to push to modernize our election system and we will work with all parties who join in those efforts,” Lever said.

The statement from the governor’s office did not specifically address Gotham Gazette questions about whether the governor will be holding any public events to promote electoral reforms or what he is doing behind the scenes to see them passed.

The comments from de Blasio and from Cuomo’s office are similar to those made last year, when de Blasio pledged to advocate for electoral reform. At his October news conference, de Blasio said “all of us here are going to be very, very actively engaged in a campaign to change state law in the coming months to finally make this a state that’s voter friendly, to finally make this a state where people can participate and not be disenfranchised.” While the mayor mentioned electoral reform during his state budget testimony in Albany at the end of January, he has done little else publicly to see reforms passed.

In November, de Blasio told Gotham Gazette that Governor Cuomo “needs to prioritize these reforms or the people will do it for him,” when asked about the governor’s role in seeking electoral reform. Cuomo has been able to see his top priorities passed virtually every year in the budget, including minimum wage and paid family leave programs in 2016 and college affordability and criminal justice reforms this year.

The main obstacle to seeing sweeping electoral reform in Albany is a Republican-led state Senate that is wary of opening up the voting process. The GOP controls a one-seat majority in the Senate and only because Brooklyn Senator Simcha Felder, nominally a Democrat, caucuses with Republicans. The eight-member Independent Democratic Conference forms a coalition with the Senate GOP.

As de Blasio indicated, the end of session in Albany annually yields new policy deals. One question is how much public advocacy from the mayor, the governor, and anyone else can sway the Senate majority. Another is what Democrats would have to be willing to give Republicans in the usual type of deal-making that characterizes Albany bargains. A third question for the prospects of state electoral reform is what Democrats may be willing to settle for when it comes to specific pieces of their reform agenda.

The “Easy Elections NY” coalition is planning a lobby day in Albany on June 13, hoping to influence the nature of whatever package of legislation is passed at the end of the session. After that day, there will be just five session days left.