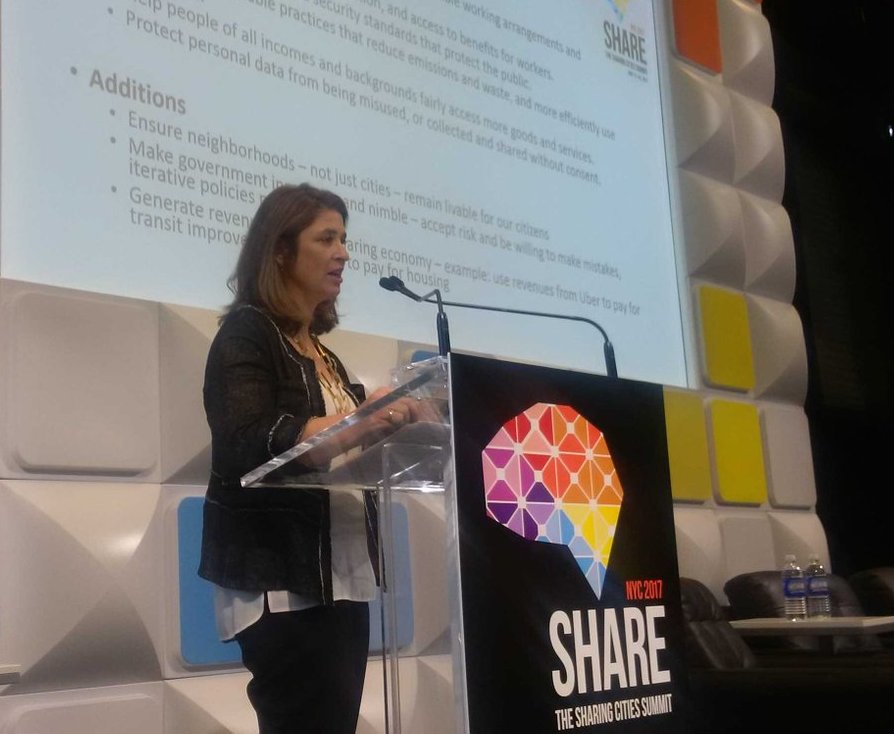 City governments across the world are trying to adjust to and standardize their approaches to companies in the so-called sharing economy. With rapidly advancing technology, major financial investment, creative entrepreneurship, and little regard for the status quo, sharing economy companies -- such as Uber and Airbnb -- often catch government regulators unprepared and disrupt entrenched interests, leading to conflict. Government leaders are forced into difficult decisions, needing to balance embracing new economic opportunities, establishing the right regulatory framework, and protecting constituents.

A growing number and variety of emerging platforms in recent years highlighted the necessity to adjust existing regulations, reevaluate security measures and benefits for consumers and workers, and outline partnership frameworks between government and platform providers.

Software companies, government representatives, and gig economy experts gathered in mid-May in New York City for the 2017 Sharing Cities Summit -- “embracing and shaping the sharing economy” -- hosted by New York City Deputy Mayor Alicia Glen. Partially closed to the media, the gathering was framed as an opportunity for participants to discuss issues related to adapting to and embracing the sharing economy, in part through sharing experiences, and to come up with a set of guiding principles for cooperation.

The summit, which mostly took place over three days at the New Lab in the Brooklyn Navy Yard, addressed three key topics: “data collection and policymaking,” “consumer protection,” and “worker protection.” Its opening and closing sessions, which featured remarks by Deputy Mayor Glen, Amsterdam Deputy Mayor Kajsa Ollongren, an introduction to the topic by gig economy expert Arun Sundararajan, and others, were open to the media.

“I think that we need a common framework...to shape our approaches beyond just reacting to a single company, or even a sector,” said Glen, who oversees housing and economic development for Mayor Bill de Blasio. “Working together we can expand our own knowledge of this transformation and send a very clear signal to the companies about what our expectations are.” For the sharing economy platforms, it would mean more predictability and less political risk when expanding to different cities and countries, she added.

“The cuddling phase of sharing is far behind us,” said Ollongren, of Amsterdam. “The issue is that there are new players out there,” she continued, “new business models, and our systems are old and not fit to deal with it.”

“Crowd-based capitalism”, another term for the sharing economy concept, is an emerging form of economic activity that will be “increasingly dominant” in the coming years and will overturn, at least in part, the “20th century industrial capitalism as a way of conducting business”, explained Sundararajan, who is a professor at the NYU Stern School of Business and author of the book “Sharing Economy.” This new economic model connects various service providers, or even a collective of individual service providers, to various consumers as opposed to established institutions with many employees supplying a product to customers, it has new intermediaries and shifts the basis of consumer trust. As one of the industry experts, Sundararajan gave a 20-minute overview of the concept and moderated a panel consisting of four sharing economy platform providers: Lyft, Postmates, Managed by Q, and Getaround, at the summit kick-off dinner.

Transportation and accommodations have become essential pieces of the “sharing economy,” which is often noted as a misnomer, given that money is typically exchanged. Other sectors include professional services, like consulting, and areas within the food sector. The sharing economy will affect the energy sector as well, Sundararajan added, explaining that as the batteries that preserve solar power improve, people will start accessing and redistributing energy locally, instead of sending it back to the grid. This may lead to new regulatory challenges for the energy sector in the future.

The sharing economy is blurring the lines between casual labour and professional work and changing the significance of what it means to have a job, Sundararajan said. But despite opportunities emerging thanks to the popularity of sharing economy platforms, there are downsides. For example, sometimes freelance workers have to deal with wage theft and misclassification by employers trying to avoid legal fees.

In the light of this trend, Deputy Mayor Glen highlighted the importance of further developing the concept of “portable benefits.” Now, when more and more people are tiling together their career mosaic, there is a necessity to “level the playing field” for them and find a way to provide adequate healthcare, pension, and other benefits, according to Glen.

“The employment model that built economic security for many during the 20th century— often a unionized job that provided a pension, health benefits, Social Security, workers’ compensation, and unemployment insurance—has become increasingly out of reach,” a report published by the Roosevelt Institute indicates. Its authors, Rebecca Smith, Deputy Director of National Employment Law project, and Nell Abernathy, Vice President for Research and Policy at Roosevelt Institute, --- the latter participated on a summit panel -- identify three key measures to address the issue: “expand the public safety net, support new models of negotiated benefits, and ensure business and public funds supplement the contributions of workers and consumers.” The report was included in the list of references for summit participants, and also reviews possible funding options for portable benefits, such as public money, user fees, business and worker contributions.

“One out of 20 people in New York City now hire somebody on a website to do basic things,” Deputy Mayor Glen said, ”that’s just the beginning of a major transformation.”

Glen, whose administration waged a losing battle against Uber in 2015, offered a few examples of situations in which the workers and the consumers may need protection. For example, ensuring that workers are compensated fairly. Here, for instance, she gave “positive credit” to TaskRabbit for removing a system of bidding on tasks from its platform and sticking to fixed hourly rates, because it helps prevent users from bidding themselves down, she mentioned. Another priority is to ensure both quality of service and safety for consumers. Considerations must be given to workers’ hours and benefits, liability and insurance, on-time payment, and more.

New York City recently passed the Freelance Isn’t Free Act, which regulates the gig economy in the city, including mandates for contracts and payments. According to research published by City Council Member Lander, who sponsored the legislation, as of September 2016 over 70% of freelancers claimed to be victims of “wage theft or late-payment.”

The gig economy creates a vast amount of new data. “We’ve got this digital interface that is going to be be sitting between us and the things that we get,” Sundararajan said. Consequently, there is a need to figure out what to do with this data, how to regulate it and protect consumers, how the government should use it and collaborate with platforms to access it.

There are a few examples of how data exchange between sharing economy platforms and government could help improve citizen experience. For instance, in the beginning of 2017, New York City mandated Uber, Lyft and other for-hire car services share data on where drivers pick up and drop off passengers. Understanding how people move could potentially help the government improve the city’s transportation system, by identifying congested zones that are lacking enough public transport options, for example. This information will be in addition to other data already collected by the city.

Another example is cooperation between the government of New Orleans and Airbnb that includes data sharing. The company supplies to the city the names and addresses of hosts. Airbnb came under fire in New York, where its ability to operate as it had been received a major blow through new state law cracking down on those posting illegal apartment rentals.

In light of the recent global cyber attack, protecting and regulating consumer data was also a topic highlighted repeatedly during the Sharing Cities Summit.

The forum served as the grounds for launching the Sharing Cities Alliance, an independent association headquartered in Amsterdam, that aims to bring together city leaders and sharing economy participants to exchange knowledge and data in the hopes of creating some shared principles and, possibly, regulatory frameworks. The five founding cities of the alliance are New York City, Amsterdam, Toronto, Copenhagen, and Seoul, according to a Twitter post by Deputy Mayor Glen.

Seoul was dubbed the world’s first “sharing city” by the alliance, thanks to the efforts of Mayor Park Won-soon and Seoul’s Metropolitan Government that launched the Sharing City Seoul initiative in 2012.

The Sharing Cities effort, as described on the website of the Alliance, includes a few milestones in its brief history. One is the Sharing Cities resolution signed by the United States Conference of Mayors in 2013 that promotes “better understanding of the Sharing Economy” and encourages creation of local task forces to establish regulations. Another is the launch of Amsterdam Sharing City in 2015.