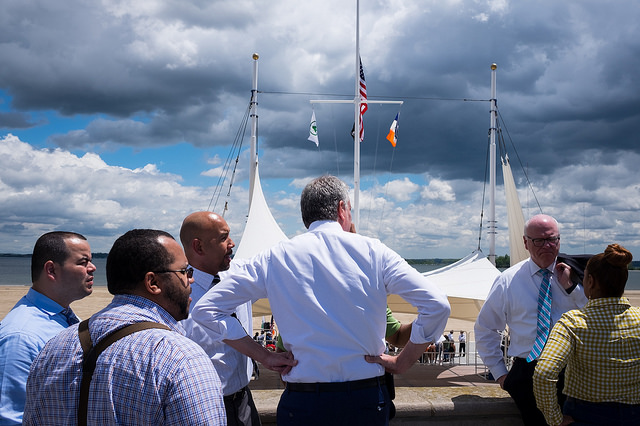 Mayor Bill de Blasio signed an executive order Friday affirming New York City’s commitment to the Paris Climate Agreement, from which President Donald Trump announced on Thursday that he would withdraw the United States. New York City, the president’s hometown, has terrain that makes the city especially vulnerable to the effects of climate change, which the Paris agreement seeks to mitigate by limiting global temperature increases. The agreement was signed by 195 countries in December 2015.

De Blasio had, on Wednesday, pledged to sign the executive order after reports came out hinting that Trump would withdraw from the deal, an action he had promised on the campaign trail, part of the president’s “America First” isolationist foreign policy and his long-standing doubts about the reality of climate change.

“The Paris Accord was the biggest step forward we've taken in many, many years, and it's unconscionable for the President of the United States to step away from it,” the Mayor said at a Wednesday press conference in Red Hook, Brooklyn, soon after reports started coming out of Trump’s decision. He added, “This is a dagger aimed straight at the heart of New York City.”

In a statement on Thursday following the President’s official withdrawal announcement in the White House Rose Garden, the mayor claimed that that his own coming executive order would be signed so that “New York can remain a home for generations to come.”

De Blasio on Thursday joined more than 80 other "Climate Mayors,” representing more than 40 million Americans, in pledging to “adopt, honor, and uphold the commitments to the goals enshrined in the Paris Agreement.” These goals all serve in the aim of keeping average temperatures from increasing by more than 1.5 degrees Celsius. The Paris Accord seeks mitigation of greater than 2 degrees in temperature increases, but describes 1.5 degrees as a goal. These cities will now have to craft policy without the cooperation of the federal government. Some cities will also do it where their state governments are led by climate change deniers, such as in Texas.

Other mayors in New York signing the statement are the mayors of Albany and Syracuse. Governor Andrew Cuomo joined a similar agreement on Thursday, forming the United States Climate Alliance with the Governors of California and Washington State.

Any major action by de Blasio in this election year becomes fodder for the mayoral campaign, of course. The two main Republican candidates for mayor, Assemblymember Nicole Malliotakis and real estate sales executive Paul Massey, are engaged in a heated primary where both de Blasio and President Trump loom large. (Before any general election matchup, de Blasio is facing a handful of Democratic primary challengers.)

Gotham Gazette asked both the Malliotakis and Massey campaigns whether the candidates would keep or rescind de Blasio’s Paris accord executive order if they were to win in November. Neither candidate has released a campaign agenda regarding climate change or the environment. Massey has begun releasing issue-based policy plans, while Malliotakis, who entered the race much more recently, has promised to do so soon.

Neither campaign gave a direct answer to the question.

The Massey campaign did affirm his support of the Paris Agreement but stopped short of committing to abide by de Blasio’s executive order were Massey to be elected mayor. The Malliotakis campaign avoided the question almost completely, stating that the mayor should be focusing on issues of local importance rather than national or international concern, on which he has little or no standing, a campaign spokesperson said.

"Bill de Blasio spends way too much time playing in national and now, international politics,” Malliotakis campaign spokesperson Rob Ryan said in a statement to Gotham Gazette. “He needs to address simpler problems far closer to home like schools that don't educate, the homeless crisis, a subway system overloaded with problems and city run hospitals that are hemorrhaging billions of our tax dollars, before he wades into climate diplomacy in Paris."

The mayor’s argument is that climate change and the Paris agreement to fight it are of significant local concern in New York City. The mayor has repeatedly referenced extreme weather, like superstorm Sandy, and the need for action to reduce the changes to the planet and thus their potential dangers.

Massey, who has never held elected office, doesn’t have a voting record on climate change to draw on, but Malliotakis does, having taken votes in the Assembly on environmental matters. She voted in 2014 to “require state funded projects to consider climate change effects” and voted against banning fracking. Governor Andrew Cuomo, a Democrat, implemented a fracking ban in 2014 after much deliberation.

Malliotakis also voted against the New York State Climate and Community Protection Act, a landmark climate bill strictly regulating greenhouse gas emissions in the state. It passed the Democratically-controlled Assembly in June 2016 by a 96-43 vote, but has stalled in committee in the Republican-controlled Senate. The version of the bill passed by the Assembly mandates stringent greenhouse gas limitations and, among other things, that 50% of New York State’s energy supply be provided by renewable energy by 2030. Cuomo instructed the Public Service Commission to order the “50 by 30” initiative in August of that year.

In 2016, Malliotakis received a score of 70 from the EPL/Environmental Advocates Scorecard, receiving points for voting for the Child Safe Products Act, a “super bill,” but losing points for voting against the Climate and Community Protection Act and a reduction on mercury in lightbulbs.

Despite her vote against the Climate and Community Protection Act, Malliotakis believes “that global warming is real and humans contribute to it,” Ryan said. “Her Assembly District was devastated by Hurricane Sandy and is still recovering from the damage.”

The Massey campaign followed up with Gotham Gazette to say that Massey "supports the Paris Agreement and believes that climate change is real. He is also concerned about the effect on business that such agreements can impose, and would address these issues as mayor with tax abatements and incentives to companies that are following best practice regarding the environment."

Note: this story has been updated with further comment from the Massey campaign.