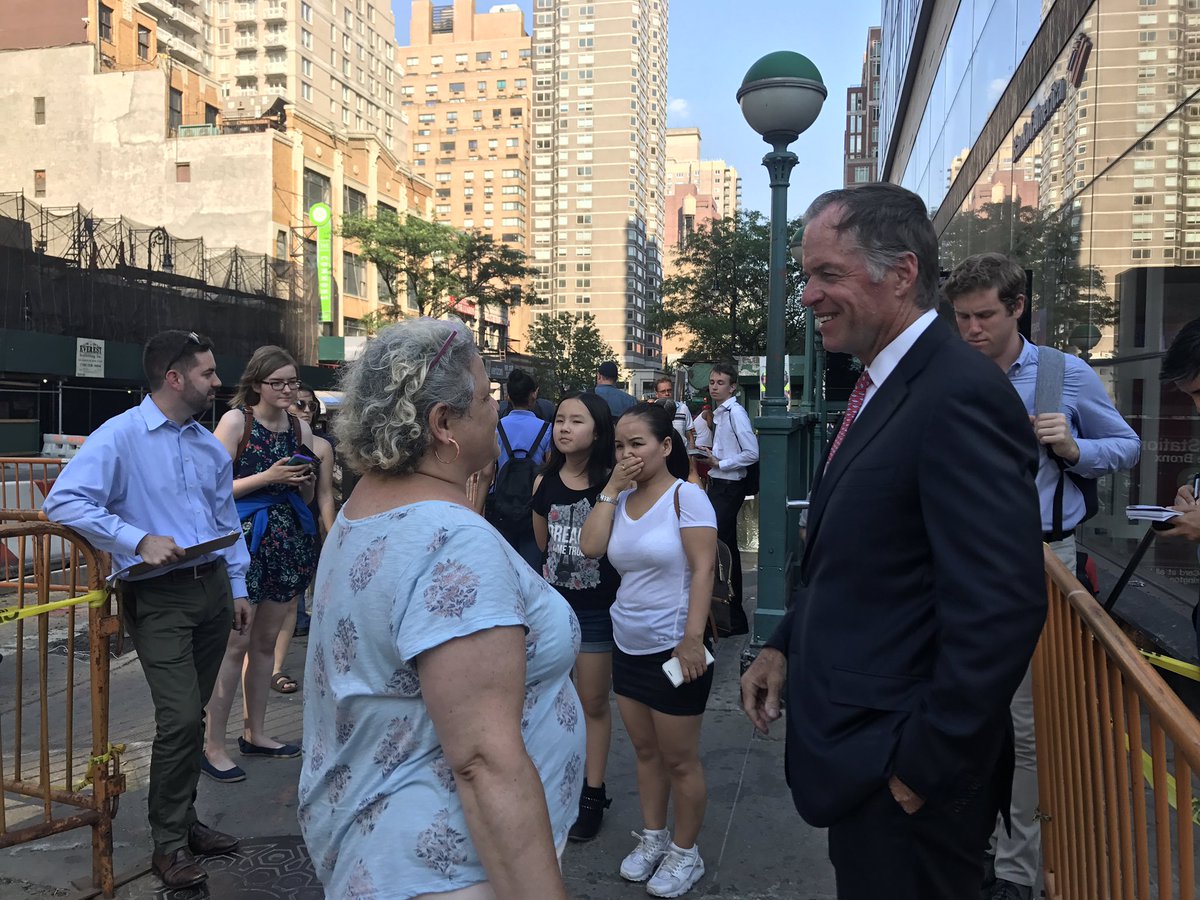 Republican mayoral candidate Paul Massey introduced himself to voters on the Upper East Side at a campaign event Monday, shaking hands outside the 86th Street and Lexington Avenue subway stop. Massey spoke with roughly three dozen people in the nearly half-hour he posted up near the street corner, sporting a dark blue suit and a broad smile on a stiflingly hot June day.

“Want to meet the next mayor of New York?” members of Massey’s staff asked commuters, most of whom rushed past, trying to lure them in for an introduction. Most passersby seemed to be confused about who Massey was, but the presence of cameras and press caught the attention of a few curious onlookers.

The 57-year-old real estate executive, accompanied by several staffers and volunteers who distributed campaign literature, frequently told those he spoke with about what he believes to be Mayor Bill de Blasio’s flaws, especially a splintered relationship with the NYPD and his inability to “consensus-build” with Governor Cuomo.

De Blasio, a first-term Democrat, is expected to make it through the Democratic primary. Massey, a first-time political candidate, is locked in a tough primary battle with Assemblymember Nicole Malliotakis. With three months to primary day, Massey must build name recognition and court voters.

During Monday’s rush hour meet-and-greet, Massey heard comments about city agencies, increases in homelessness and crime, transportation, and street safety issues. It was not clear how many Republican primary voters he spoke with.

Holding his first subway stop event on the Upper East Side was no coincidence, of course -- the neighborhood is one of the relatively few in the city with at least a solid Republican census when it comes to mayoral races, and it could be particularly helpful to Massey if he can win votes there. In past elections, including the 2013 general election for mayor, the largely well-off neighborhood typically votes for the Republican candidate in greater numbers than much of New York City. Republican nominee Joe Lhota bested de Blasio in 2013 by as much as 30% in parts of Election District 73, where the Massey campaign event took place.

Massey’s message, that he is a change agent and problem-solver who will unite the Big Apple while reversing the overly-leftward shift ushered in by de Blasio, is resonating with some. One campaign volunteer said that he missed Michael Bloomberg and thought Massey was the best candidate to revive the former mayor’s governing philosophy.

David, a young-looking Republican from Manhattan, had a relatively long conversation with Massey, then, speaking with Gotham Gazette, voiced displeasure with de Blasio’s relationship with the NYPD, which has been the source of much controversy over the past three-plus years, though less so of late.

“I’m sick and tired of the corruption in New York City,” David said. “De Blasio has just divided this city completely. [The police] are sacrificing their lives for us, and our mayor is mocking them,” he added. “We need a change in this city, and I think Paul is definitely going to provide that change.”

As can often be the case at campaign subway stops, Massey had some trouble attracting engagement. At one point he offered a young boy a high-five, but the boy kept walking -- only to double back and accept the gesture when he seemed to realize it was part of some kind of event.

Before departing for his next campaign stop Massey took questions from reporters who were there to see him. He took the opportunity to harshly criticize de Blasio, as he typically does, painting his Democratic rival as “divisive” and an “extreme ideologue” who has governed a city which is “falling apart.”

When asked if he had learned anything new from the individuals he had spoken to throughout the afternoon, Massey said, “I think people are concerned about similar things. People are concerned about our safety--they worry about the mayor’s relationship with the police. The conversations were in sync with what I’ve been hearing all along. The theme is, we really need a change from Bill de Blasio, and we need it now. There is a chord of discontent out there about this mayor that I think we’re just starting to realize.”

Asked why he had chosen the location for the subway meet-and-greet, Massey said there was no particular reason, that he’s been campaigning all over the city.

With subway problems dominating much of the New York conversation of late and his event outside a subway stop -- from which Massey emerged at about 5:10 p.m., seemingly after a train ride -- the candidate was asked about solutions to transit-related issues, which he lamented are “plaguing the city.” Massey cited a need to overhaul operations at the MTA, a state entity under the Governor’s control. In a similar vein, Massey said as mayor he’d improve infrastructure in all five boroughs, with the goal of improving transit.

Massey’s full agenda of infrastructure proposals will be released next week, he said, though he was sure that the framework would include a provision conditioning MTA capital spending on increased mayoral control on matters related to the agency.

“I think the people on the streets that I talked to were telling me that several times a month they're significantly late for work,” he said, labeling the problem a “management issue” that de Blasio has failed to properly handle. Massey subsequently argued that poor subway conditions are at least in part due to the mayor’s inability to cooperate with Governor Andrew Cuomo, after a reporter pointed out that MTA matters are Albany’s, not City Hall’s, responsibility.

“I think that currently we have a mayor that hates the governor and that is impeding a lot of things in this city,” he said, later adding that not only potential transportation fixes, but efforts such as affordable housing initiatives are also hindered by de Blasio’s contentious relationship with Cuomo. “[W]hoever the governor is, I'll work with him or her in a consensus-building basis.” Massey said. “That's the kind of leader that I am.”