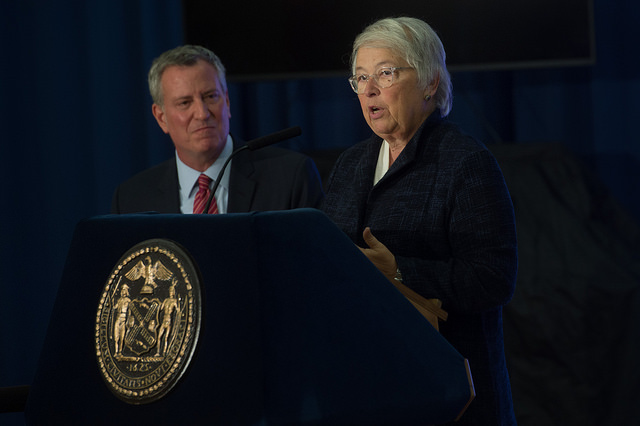 New York City elected officials and independent watchdogs continue to voice concerns about the Department of Education’s transparency and contract procurement process. The issue became a flashpoint in the debate over mayoral control of New York City schools, which Albany lawmakers have yet to extend despite a June 30 expiration date. Like other powers over the schools, education-related contracting -- totaling billions of dollars per year -- has been centralized under the Mayor and the DOE through the mayoral control model of school governance.

In the recently adopted city budget for fiscal year 2018, which begins July 1, about one-third of the $85.2 billion of operating funding is allocated to the DOE. Most of that funding goes to personnel, but there is a significant sum, about $7 billion, which will be devoted to outside contracts. While there have been no major recent scandals, the process by which the DOE awards those contracts, as well as the availability of information about the contracts, continues to draw criticism.

Chief among those critics have been Comptroller Scott Stringer and City Council Member Helen Rosenthal, who chairs the Council’s Committee on Contracts. They are joined by nonprofit leaders who have scrutinized DOE practices for years, including under Mayor Michael Bloomberg, who first won mayoral control of city schools in 2002, ending the old Board of Education system. While there have been multiple high-profile contracting scandals, recently the concern has been a constant stream of smaller-scale, everyday contracts awarded without proper processes, critics say.

Stringer has repeatedly and publicly pressured the DOE to disclose more information and clean up its procurement practices. Most recently, Stringer did so in testimony to the City Council as the new budget was being debated. In part, Stringer said that as revenue growth to the city is slowing, there is heightened need for the DOE to be sufficiently scrupulous.

According to Stringer, the Department still does not pay enough attention to ensuring the DOE’s billions in contract funding is spent efficiently. “Time and time again, my office finds that current departmental processes are inadequate,” Stringer stated in his testimony, citing $6.7 billion for fiscal year 2018. “Whether it is through an audit of DOE or a review of DOE’s contracts, we find a lack of transparency and a lack of detail that is frightening when you are talking about billions of dollars earmarked for our children.”

“The DOE claims to have a system of checks and balances,” Stringer continued, “but if you dig into the details you will find a lack of independent review, a lack of accountability and whole lot of rubber stamps.”

Stringer also called the DOE “one of the least transparent agencies in the government,” adding he felt the DOE would “rather hide everything than open up their books." (Stringer’s statements were quickly used by state Senate Majority Leader John Flanagan, a Long Island Republican, against Mayor Bill de Blasio in the mayoral control debate. The comptroller quickly reiterated his support for mayoral control in no uncertain terms.)

When pressed for specifics, a spokesperson for Stringer pointed to wasted funds on technology initiatives, failure to detect collusion to drive up prices by food suppliers, late release of 70% pre-kindergarten contract information prior to the 2014 school year, and overpaying on custodial supplies, which Stringer has pointed out over the last three-plus years since he took office as Comptroller and de Blasio became Mayor.

Along with these examples, there have been several other instances in which improper contracting practices have cost the city and harmed the DOE’s reputation. In 2008, the city Special Commission of Investigation (SCI) found the DOE had squandered $437,000 on payments to DynTek, a vendor for the DOE’s Department of Instructional and Information Technology which had been paying computer consultants employed by ERS Systems without the DOE’s authorization. “ERS billed DynTek for these services and DynTek, in turn, marked up these costs before billing the DOE,” according to the SCI. Three years later, a consultant Willard (Ross) Lanham was charged with funneling $3.6 million of DOE funds into his own pockets.

In 2015, Custom Computer Specialists, a contractor the DOE considered, almost received a $1.1 billion deal to provide hardware and software to schools despite questions about the size of the contract and process involved, as well as the firm's indirect connection to an overbilling scheme. Outcry, led by education activist Leonie Haimson and Council Member Rosenthal, killed the potential deal. Most recently, in May, the Comptroller’s office released an analysis that revealed that after spending over $347 million on upgrading internet services, 45 percent of teachers said their schools’ internet quality “did not meet their instructional needs,” a survey of middle school teachers found.

At a May City Council hearing regarding the 2018 budget, Rosenthal asked if the city Office of Management and Budget has unearthed similar problems to the ones in 2015, such as approval of “specious contracts.” “I would like to know that the OMB is doing a regular audit of its contracts,” Rosenthal said.

“I would want to know that the DOE is regularly being investigated,” said Rosenthal. “If we were to do that more systematically then we would have more available to us to spend on things we so desperately need.”

Rosenthal, who chairs the contracts committee and sits on the education committee, credits Haimson with calling attention to chronic DOE contracting deficiencies. As a response to Haimson bringing awareness to the issue, she has headed efforts to ignite change in the Department. Rosenthal, however, declined to explicitly comment on Stringer’s testimony, and separated herself from the Comptroller's narrative. The Manhattan Council member believes that the DOE has actually improved considerably of late in contracting and openness, especially since she's undertaken efforts to bend the department toward better practices.

“I do thank you for what’s been done,” Rosenthal said to Dean Fuleihan, Director of the OMB. She framed the situation by contending the previous mayoral administration had “dug a hole,” and the current one is in the process of getting New York City public education out of it.

"What I’ve seen is positive steps that have allowed for more oversight and transparency,” Rosenthal said in an interview with Gotham Gazette.

The Upper West Side lawmaker emphasized that, in her view, DOE has allowed City Hall to both scrutinize the Department and collaborate with it. "They have made the contracting process more transparent...they have improved, I think, the oversight relationship with the city agencies,“ she said. Rosenthal noted that if capital and service contract costs rise, that information is now relayed to the City Council. "That's a big change.”

According to Rosenthal, contracting practice woes have been ameliorated and their details brought into the limelight in recent years, as evidenced by the Department beginning to post contract information online.

Still, while Rosenthal was clear that the DOE has progressed, there is room for improvement. "Is it perfect yet? Of course not,” she said. “But is it much better? Absolutely.” Rosenthal was optimistic about the prospect of additional improvements. She said the City Council and DOE have a “good constructive relationship moving forward.”

Nonetheless, Haimson, executive director of Class Size Matters, a nonprofit advocacy group, is not as satisfied with the DOE as Rosenthal. “The budget is still increasing with little or no transparency," Haimson said in an email to Gotham Gazette. By phone, Haimson expressed skepticism about how the DOE manages its enormous budget and its forthrightness in doing so.

“I am very disappointed in the whole process because we’ve been sounding the alarm for years now about the lack of transparency with these huge contracts that go through the PEP [Panel for Educational Policy],” she said.

The PEP is a body consisting of 13 members appointed by elected officials, predominantly by the Mayor. Mayor Michael Bloomberg created the Panel to replace the Board of Education after the city gained mayoral control of schools. The PEP is designed to conduct independent oversight of the Department of Education but has not necessarily functioned in that manner.

As the New York Post reported last summer, one former PEP member alleges the group is comprised of members who were not equipped to properly review the budget and were pressured into doing the Mayor’s bidding. And, in Haimson’s opinion, the PEP still does not properly vet contracts, allowing the DOE to act with impunity. "I don't think it’s ever turned down a contract in its existence,” Haimson said, referring to the reputation the PEP has as a rubber stamp, both on policy and contracting. "It hasn't gotten better in some ways and in many ways it has gotten worse," she said of the DOE overall.

The DOE engaging in sloppy, questionable dealings in secret is not new, said Haimson, who has worked as an education activist since the early aughts. Like Rosenthal, she alleges these problems became rampant under Mayor Bloomberg. “[A]s the budget rose dramatically and the oversight was more critical, Bloomberg didn't want any more scrutiny,” she said.

However, unlike Rosenthal, Haimson says the DOE’s forthcomingness has gotten worse, not better, with de Blasio at the helm. “Under Bloomberg, I was able to go to OMB meetings,” she said, alleging she had been barred from these meetings in recent years. "The fact that the Mayor’s Office has more oversight may be good. [But] [w]e don't even know," Haimson said. “There doesn't seem to be anyone looking over their shoulders," she said, adding that providing ample DOE oversight would necessitate an independent commission.

The Department of Education disputes claims that it is not careful or candid in its contracting processes. “Our procurement process is transparent and has strong oversight mechanisms, while delivering essential services to students and schools,” a DOE spokesperson said in a statement to Gotham Gazette.

Though not related to contracting practices, Council Member Ben Kallos introduced a bill in February that would require the DOE to more thoroughly disclose information about applications and enrollment to New York City public schools. The bill was pre-considered, and a hearing was held on it before it was introduced.

"The bill has received some internal support, it has had its hearing and negotiations are ongoing to possibly move it forward," said a spokesperson for Kallos regarding the bill’s status.

A representative for City Council Member Daniel Dromm, who chairs the Committee on Education, did not respond to multiple requests for comment about the status of the Kallos legislation, along with inquiries pertaining to DOE transparency and contracting practices.

“We have our own issue with DOE," Kallos’ spokesperson said. "Obviously Council Member Kallos wouldn’t have released the bill if [the DOE] was a model of transparency.”