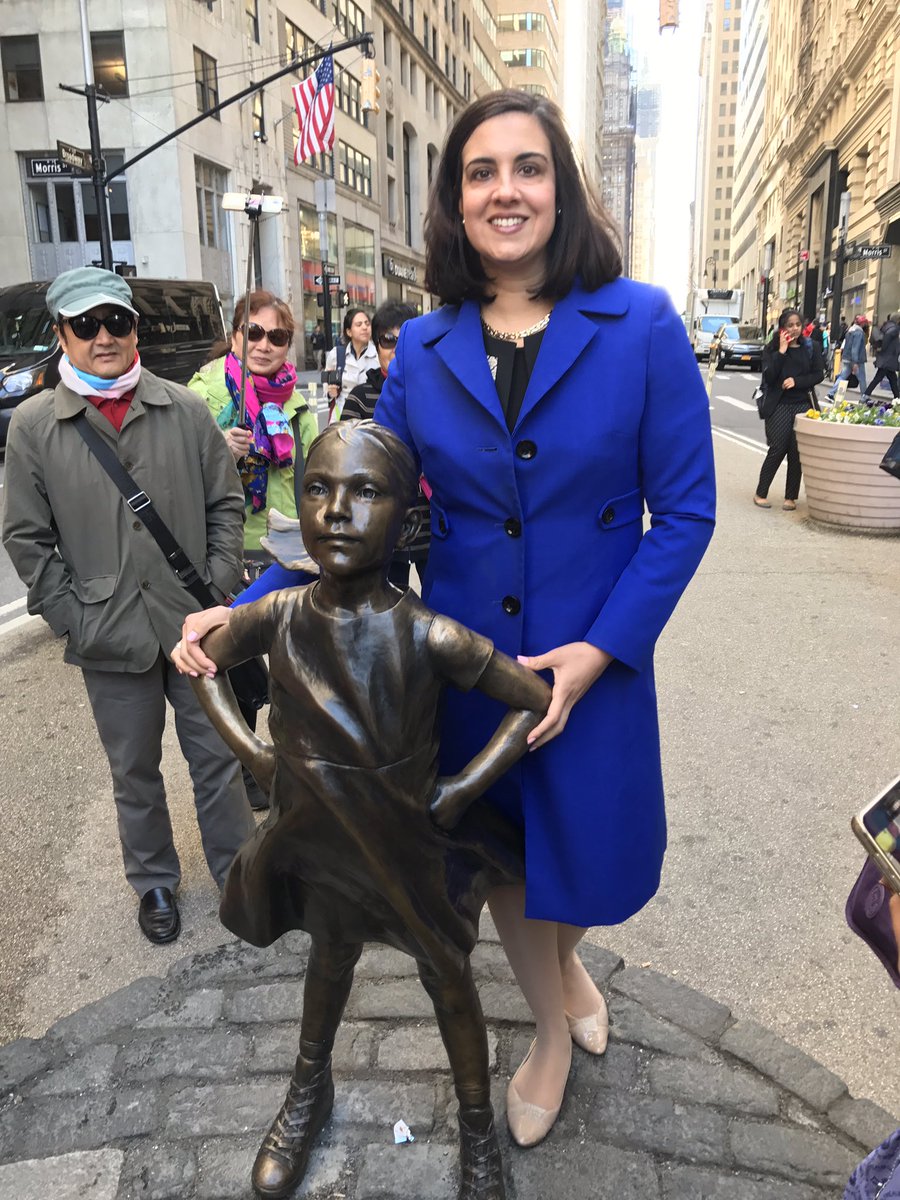 In 2013, one storyline of the raucous and unpredictable Democratic mayoral primary was Christine Quinn’s bid to become the first woman elected Mayor of New York City. Then the City Council Speaker and the early frontrunner in the race, Quinn largely avoided talking about that history-making potential. Running as the continuity-with-change candidate based on her close working relationship with outgoing Mayor Michael Bloomberg, Quinn finished third in a crowded primary field behind the eventual winner of the election, Bill de Blasio.

As de Blasio seeks reelection this year, he appears set to face Republican Nicole Malliotakis in the general election -- de Blasio is a heavy favorite in his Democratic primary and Malliotakis became the presumptive GOP nominee after her toughest competition, real estate executive Paul Massey, dropped from the race last week.

Malliotakis, a 36-year-old state Assembly member from Staten Island, is the only woman in the 2017 mayoral race and is looking to become the first woman to lead a major party ticket since Ruth Messinger, a Democrat, in 1997, and Diane McGrath-McKechnie, who was the Republican nominee in 1985.

In an interview, Malliotakis said that while she is excited to inspire younger women and girls, she does not plan to make her gender or history-making potential a campaign focus, nor has she thought much about a policy agenda related to so-called women’s issues. She did say, though, that she is honored to be in the position she’s in and hopes women rally to support her; and she promised, “I'll be coming out with my sort-of a women's platform in the future.” Its contents are still “to be determined,” she said, though she did cite Latina suicide and domestic violence as key concerns that fit the general category.

If she does face de Blasio in the general election, as is expected, Malliotakis will be competing against a mayor who has received a lot of praise for his work on gender equity and empowering women at the highest levels of city government. For example, de Blasio recently signed legislation put forward by Public Advocate Letitia James that bans city employers from asking job candidates for their salary history, a practice that disadvantages women. But, de Blasio also recently came under fire after a New York Times article pointed to a disproportionate percentage of female departures from his administration, something Malliotakis referenced in the interview with Gotham Gazette.

Asked if she’s thinking about making history as the first woman to become the city’s mayor, Malliotakis said, “of course you think about it...especially in a city that claims to be so progressive, we've never had a female mayor.”

“I'm very proud to carry this banner, and it's really an honor. But I don't think people should vote for me because I'm a woman,” Malliotakis said. “I think it's great. I would love to see more women coalesce around me, as the female candidate in the race, but certainly I believe that I should be judged on my policies, and what I put forward. I think I have some really good ideas for this city, and I think that I've presented many ideas over my time in the New York State Assembly.”

Pieces of her Assembly record and stances on key issues may make it challenging for her to appeal to many New York women, and are already fodder for the de Blasio campaign.

Malliotakis, who will also appear on the Conservative Party ballot line in November, and possibly others, is a Republican in a heavily Democratic city. But, she is hoping to woo not only Republicans, but Giuliani Democrats, the city’s sizeable population of voters unaffiliated with a political party, and disaffected Democrats who are disappointed with de Blasio for whatever reason.

She’s already shown some movement leftward as she eyes the general election: she announced her support for marriage equality after having voted against it in 2011, when it passed through Albany. (She was subsequently criticized by the head of the Conservative Party, as reported by Politico New York, showcasing the balancing act she may be attempting as she attempts to hold the Republican base and appeal to moderates.)

Asked where she stands on some of the typical, higher profile topics often referred to as “women’s issues,” like gender pay equity, reproductive choice, and family leave, Malliotakis said she voted in favor of the bills in the “women’s equality agenda” that came through the Assembly, which included measures like pay equity and protecting domestic violence victims. However, she voted against the bill that would write the Supreme Court’s Roe v. Wade decision into New York law.

“The one bill that I did not support is the abortion expansion bill,” she said, “which would allow abortion to the third trimester. And I think most New Yorkers, if you look at some of the polls, are opposed to that, in the third trimester.” As for her abortion policy, Malliotakis said, “I don't like that question, because I feel it's not just pro life and pro choice, it's not black or white, I think there's a lot of things that go into a decision of that magnitude.”

She continued: “Personally, it's not something that I could do, but it's not to say that my views should be imposed on other women who may have different experiences. So I don't like being pigeonholed into one category. I never found that to be appropriate. But what I will say is I am opposed to that third trimester legislation that has come up again and again.”

De Blasio and his campaign aren’t sitting back and letting Malliotakis define her candidacy without their criticism, quickly playing offense and seeking to tie Malliotakis to Republican President Donald Trump, who is deeply unpopular in New York City.

"No one who made the decision to support Donald Trump after his unconscionable and illegal behavior towards women should be lecturing anyone on women's issues,” said Monica Klein, a spokesperson for de Blasio’s campaign, in a statement to Gotham Gazette. “Whether she's opposing access to reproductive healthcare, voting to deny LGBTQ couples the right to marry, or supporting the sexist President, the Assembly Member has shown time and again she's dangerously out of touch with New York City's women.”

Klein was referencing Malliotakis’ votes against marriage equality and against a bill that would prohibit the state from denying access to abortion services. Malliotakis has said she voted for Trump in November after having supported Senator Marco Rubio in the Republican presidential primary.

“Under Mayor de Blasio, employers are banned from asking about salary history, we have a new Commission on Gender Equity, tampons are free in city schools, and lactation rooms are open in social service agencies,” Klein also said. “That's what a real champion for women's issues looks like."

“I'm sure we'll be talking about women's issues” on the campaign trail, Malliotakis told Gotham Gazette, standing outside City Hall after a press conference where she released her homelessness-fighting plan. Homelessness, it seems clear, is much more of a political vulnerability for de Blasio than issues related to gender equity or women’s rights. (Malliotakis' campaign followed up with Gotham Gazette to note that the Assembly member recently voted in favor of state bills to prohibit employers from asking salary history of applicants and to remove sales tax from feminine hygiene products.)

While Malliotakis can speak to issues that will resonate with women, it’s not clear how much she will. Thus far, her campaign has focused on attacking de Blasio’s ethics and management, and on “quality of life” issues like homelessness, public transit, and traffic.

“I know how difficult it is to be in a male-dominated field,” Malliotakis said of politics and government, “and so I think it's having a woman be mayor, I mean that's the greatest thing we could do for women's equality.” It “would do more for women's equality than any other types of bills...or proclamations or anything like that. And so, if I can deliver that for the women of New York City, that would be wonderful.”

Whether or not Malliotakis chooses to put her gender and history-making potential at the front and center of her campaign, she can’t escape being viewed as a woman running for office, says Alexis Grenell, an expert on gender norms and research and co-founder of Pythia Public, a political consultancy.

“Women don’t have a choice whether to run on their gender or not on their gender,” Grenell said in an interview. “You have to deal with gender no matter what because the electorate sees gender. Is she going to ‘run as a woman’? She has no choice.”

But, Grenell stressed there are still many relevant choices to make. “There’s a difference between having a platform that affirmatively puts forward gender as a qualification or putting forward a platform that deals with gender issues.”

Malliotakis’ policies may not match what the majority of New York City women believe in, but, Grenell explained, “Speaking to issues that women tend to care about is a mainstream strategy that will help win elections.”

No matter her political beliefs, Malliotakis faces a normative disadvantage, Grenell said, because “Women have a higher barrier for entry in terms of qualifications....She will really have to lead with her qualifications.” The electorate judges women more harshly than men.

Malliotakis may be just 36 years old, but she’s a veteran politician who has been in office since 2011, after she defeated an incumbent, and possesses quick wit and political instincts. Still, as state Republican Party chair Ed Cox recently told Gotham Gazette, she is a legislator, and needs to show voters that she can be an executive. As Grenell points out, this bar may be higher for many voters because she is a woman.

De Blasio must be careful campaigning against Malliotakis, Grenell said, especially when they face off in debates, if it gets to that point. The mayor must “fight some of his inclination to be patronizing,” she said, “which would take on a whole new dimension when facing a strong, young woman on a debate stage.” Grenell referenced Joe Biden’s roundly-praised performance against Sarah Palin in their 2008 debate, which some saw as a potential minefield for the soon-to-be Vice President.

Malliotakis is not making gender the focus of her candidacy, but she does see it resonating on the trail. “I do see particular excitement coming from women when I interact with them,” Malliotakis told Gotham Gazette, “when I go to parades, for instance, or events, that women are very excited that I'm running...a lot of people want me to take photos with their little girls.”

Note: this article has been corrected to more clearly reflect Malliotakis' "no" vote on the Roe v. Wade measure.