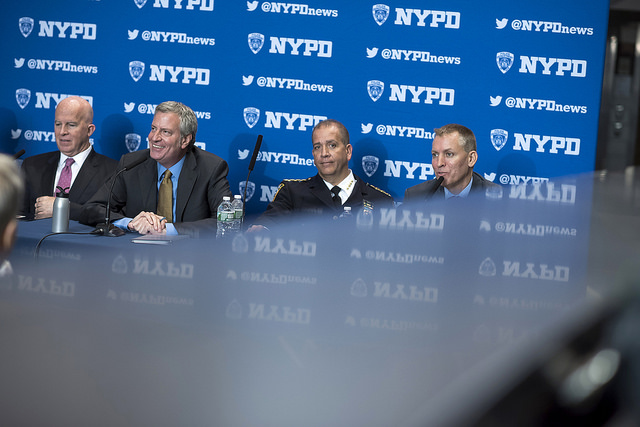 Asked about the cost to taxpayers for his recent trip to Germany, Mayor Bill de Blasio reiterated at a press conference Wednesday that expenses for himself and three aides were paid for by the organizers of a protest rally the mayor was asked to headline. As for his NYPD security detail, which did come at taxpayer expense, the mayor said, “The NYPD always provides some kind of estimate so please ask them for that.”

But, news outlets had already been asking the NYPD for that cost estimate and the department refused to provide it, referencing long-standing practice that de Blasio was apparently unaware of. Asked a second time about releasing the estimate Wednesday, de Blasio said of the NYPD, “I’m not an expert on what they do but that’s who has the number.”

“I want to say when it’s security related I respect the protocols of the NYPD,” de Blasio said. “So, that’s something that they have – I want whatever’s been done in the past to be done here. I’m just not an expert on what they release and what they don’t.”

Told then by Gotham Gazette that the NYPD was refusing to give a cost estimate for the taxpayer expense, de Blasio said, “I want consistency with whatever their practice has been. That’s what I’m saying.”

Asked if he didn’t perhaps want a more transparent approach, de Blasio said, “I don’t know what their practice has been so I don’t have a baseline...I’m saying, whatever it’s been in the past, it should continue to be. That’s what I’m comfortable with.”

In a statement to Gotham Gazette, an NYPD spokesperson said that the department has “been over this many times,” that “The NYPD does not release information or discuss the specifics surrounding protection of dignitaries, including the mayor. This is a long-standing policy that has been in effect for decades.”

So, while the plane and lodging costs for the mayor and his aides was not billed to the city, the airfare, accommodations, and any other costs, like per diems, for NYPD officers who went were, but the public will not be informed of that expense. The decision by de Blasio and the NYPD also comes a short time after they were highly public about the costs to the NYPD and city for protecting Donald Trump and his family in late 2016 and early 2017. De Blasio regularly lobbied publicly, using cost estimates provided by the NYPD, for federal reimbursement, which the city wound up receiving.

Speaking of Trump: in a trip announced at the very last minute, de Blasio flew to Hamburg, Germany on Thursday July 6 in order to hold several meetings with government officials there and speak at the Hamburg Zeigt Haltung rally on Saturday, held in response to the G20 summit of world leaders being hosted nearby at which President Donald Trump was appearing.

De Blasio said he was invited to speak at the rally, which was to promote democratic principles and advocate for fighting climate change, welcoming immigrants, and other typically more Democratic values, to present an alternative American viewpoint to that of Trump, who has taken a more isolationist approach to world affairs than his recent predecessors, is a climate change skeptic, and has promoted anti-immigrant policies.

De Blasio’s shielding of the taxpayer expense for his trip was met with disapproval from good government leader Dick Dadey, executive director of Citizens Union. “For a mayor whose previous hallmark had been transparency, it would be important to request that the NYPD publicly release the cost to taxpayers for an NYPD contingent to accompany him to Germany. This has nothing to do with security and everything to do with the taxpayers’ right to know how their tax dollars are spent -- the two need not be confused.”

The mayor somewhat disingenuously also said Wednesday that people need to understand that he always has an NYPD security detail, which of course comes at taxpayer expense. De Blasio failed to mention, though, that his detail is not typically flying internationally or staying at hotels.

Along with the hidden NYPD costs to taxpayers, the last-minute nature was another non-transparent aspect of the trip. De Blasio and his team have chalked this up to uncertainty around whether he would actually go given other late-breaking events, including the murder of an NYPD officer. When it was clear that the wake and funeral for Officer Miosotis Familia would not be held until the beginning of this week, de Blasio finalized his plan to go to Germany. The mayor’s press office gave the media about two hours notice before de Blasio was in the air heading overseas.

The mayor’s chief spokesperson argued that the office does not do tentative scheduling with news outlets, so there was no way to notify members of the press in advance given the fluid nature of things.

Asked about this on Wednesday, de Blasio said he stood behind his press secretary, Eric Phillips, “100 percent on this.” But, he indicated that the events around this particular trip were special and that it is possible for the press office to give some heads up to news organizations in instances where there is some uncertainty.

Referencing the uncertainty around the extension of mayoral control of New York City schools and services for Familia, de Blasio said, “I think we had two really abnormal situations happening that affected both focus and clarity. In a normal situation, of course, you could and we will – if we think something is likely but not definite, absolutely there are times when we can give notice and say ‘hey this is for your information.’” But, de Blasio said that this situation, “was so gray that we thought that it would just create confusion and again we were focused first and foremost on...the services. That would was the decisive factor.”

Of his reason for accepting the invitation to go and speak at the rally, de Blasio told Gotham Gazette it was part of the theme of “joint effort between mayors around this country and globally” that he said “is going to be more of the norm, going forward, because no one has the illusion our national government is going to address these issues. I mean, it’s just as simple as that. Our whole view right now of what happens in Washington is stopping bad things from happening. There’s no potential for a positive climate policy, a positive immigration policy, a positive policy to address income inequality – any of that. So, the cities of the world – and, in some cases, states – are going to have to lead the way and we’re all working with each other, and we’re all trying to learn from each other, set goals together, etcetera.”