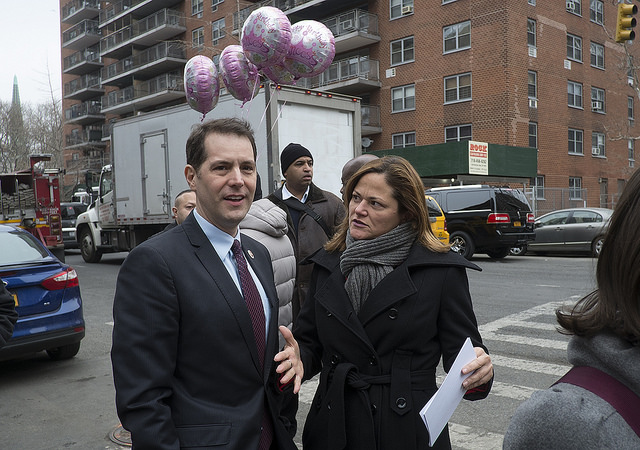 The New York City Council passed a bill on Thursday to guarantee free legal services to low-income tenants facing eviction in housing court. The bill codifies an agreement, announced in February this year, between the Council and Mayor Bill de Blasio to fully fund anti-eviction legal services in the next five years.

The “Right to Counsel” legislation, Intro. 214, was sponsored by Council Members Mark Levine and Vanessa Gibson, who have consistently advocated for the bill since introducing it three years ago. Under the new law, the first of its kind in the country, the city’s Office of Civil Justice Coordinator will provide low-income tenants -- those with household incomes below $49,200, or 200 percent of the federal poverty level for a family of four -- with legal representation free of cost, phased in by zip codes over five years. The law will also provide legal consultations to those whose income is higher than the bill’s threshold and establish a legal services program by October this year for New York City Housing Authority tenants facing administrative proceedings to terminate their tenancy. The city has allocated $15 million to implement the new provisions in fiscal year 2018, increasing that to $93 million by 2022 by when it is expected to serve 400,000 New Yorkers.

The mood in the Council chambers before Thursday’s vote was celebratory as Council members expressed their support for the bill and congratulated their colleagues on achieving a key priority of the dominantly progressive body. At one point, the chamber filled with whoops and cheers from tenant advocates who had fought for the legislation and were there to see its passage. The bill passed with an overwhelming majority, with 42 Council members voting for it and one abstention. Only the three Republican members of the body voted against the bill.

“This is an incredibly historic moment for this Council,” said Council Speaker Melissa Mark-Viverito, before the vote. “This attention to the needs of our most vulnerable residents will keep families together and in their homes, and that importance cannot be overstated.”

“We know that the worst of the landlords have been using housing court as a weapon,” said Council Member Levine at the rally. “They called tenants in the court on the flimsiest of grounds because they knew in the vast majority of cases, the tenant would not have a lawyer.”

Public Advocate James, whose office has placed a particular focus on tenant protection and advocacy, said, “We are bringing power to the people. Tenants with a child on their hip and a pen in their pocket -- that’s all that they had. Tenants who came into housing court crying to the judge, and the judge would say ‘Shut up and sit down, I don’t recognize you...’ Those days are over.”

According to the Office of Civil Justice's 2016 annual report, 99 percent of landlords in eviction proceedings in 2013 were represented by an attorney, compared to one percent of tenants. The de Blasio administration’s focus on anti-eviction programs and funding -- a key component of the mayor’s plan to control and reduce homelessness in the city -- has already increased the number of tenants in housing court with legal representation to 27 percent. The new law aims to make that access universal.