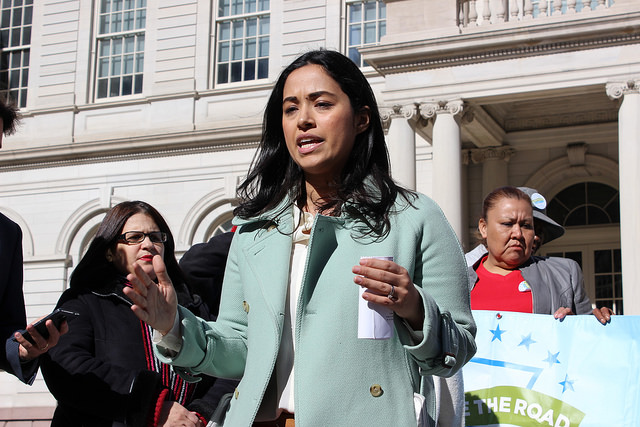 One of the 10 “open” City Council seat races is taking place on the East Side of Manhattan, in District 2, currently represented by Rosie Mendez, who is term-limited out of office. Several candidates, including Mendez’s preferred successor, Carlina Rivera, are competing in the Democratic primary, which will determine who holds the seat next given it is a staunchly Democratic district.

Rivera, Mendez’s former legislative director, has a good deal of momentum and support from the Democratic establishment. She has received endorsements of numerous elected officials, such as Public Advocate Letitia James, Comptroller Scott Stringer, Congressional Rep. Nydia Velazquez, State Senators Brad Hoylman and Daniel Squadron, and others, as well as endorsements from unions and advocacy organizations. She has released a broad campaign platform touching on issues including housing, education, immigration, and criminal justice, putting down progressive markers on each.

But Rivera is facing serious competition from other candidates, including Ronnie Cho, a strong fund-raiser, in the district that is largely made up of the Lower East Side. The seat has long been considered a Puerto Rican stronghold, given representation by former Council Member Margarita Lopez and Mendez, along with U.S. Representative Nydia Velazquez, but like many others across the city, the district has seen demographic shifts. Rivera is also Puerto Rican.

According to the most recent campaign finance filings, from mid-July, Rivera has raised the most money in the race. However, Cho, a former aide in the Obama administration, is not far behind. Rivera raised $143,412 and Cho about $132,931, while Cho has spent more of his money than Rivera has -- and Cho has actually spent $136,528, leaving him with a negative balance of $3,597. Rivera has spent $90,248, leaving her with a balance of $53,164 as the race heads toward the September 12 primary vote.

In late July and into August, candidates typically raise and spend funds at a feverish pace leading to primary day. The next filing will make clear whether Cho was able to replenish his coffers and continue to try to get his message out. Candidates are also now receiving public matching funds through the city’s robust campaign finance system, though Cho is the only candidate in the race who is not taking public matching funds, allowing him to abide by fewer rules on spending, but putting him at a disadvantage.

Other candidates running in the Democratic primary include Mary Silver, an attorney and Community Board member; Erin Hussein, a lawyer; Juan Pagan, a community activist who challenged Mendez in 2009; Jasmin Sanchez, founder of the Ana Luisa Garcia Community Center and former community liaison for Senator Squadron; and Jorge Vasquez, an attorney who has worked with Legal Services NYC and the Commission on Human Rights.

Perennial candidate Jimmy McMillan, who initially stated that he was again running for mayor, is running for the District 2 Council seat under the Republican and Rent Is Too Damn High umbrellas. The Libertarian line is occupied by Donald Garrity. They will face the winner of the crowded Democratic primary.

Rivera, like many prospective Council members across the city, sees affordability as the most pressing issue facing her potential constituents.

“From Kips Bay to the Lower East Side, we have seen tremendous changes in just the last 10-20 years,” Rivera told Gotham Gazette. “And this has created a lot of strain for longtime residents both in access to affordable housing and their ability to open or maintain a small business, or even find affordable options for food and other basic needs. In addition, we see a troubling increase in the number of people in our community who are either homeless or are at risk of losing their home.”

Indicative of the job of a City Council member -- which blends constituent services with legislative and oversight responsibilities -- there was a recent crisis for Lower East Side residents at Masaryk Towers, a Mitchell-Lama public housing apartment complex. Building management abruptly told residents that the 1,100-unit complex would go without gas for six weeks. The building did not provide hot plates or meal credits, leaving residents forced to eat out, which many can’t afford on a routine basis.

Rivera says that the situation requires more direct communication between building management and tenants, as well as services like meal delivery. However, she also took a harder line against situations where this is done deliberately.

“In separate cases where service is intentionally cut to force tenants out, we need to use every tool available to hold management companies and owners accountable through either the State Public Service Commission or the Attorney General's office,” she said. “There is also a bill I support currently before the Council that would create a watch list for predatory landlords and the lenders they use to finance these tactics.”

Rivera worked on a bill that requires gas service operators to notify the Department of Buildings 24 hours in advance of a shutoff, which was signed in December by Mayor Bill de Blasio as part of a legislative package on gas safety.

Rivera’s status as the frontrunner has opened her up to criticism from some other candidates. Sanchez, who has the backing of the Liberal Party, has called Rivera a party-line politician.

“Rivera is considered the establishment candidate because she was hand picked like a puppet by the party machinery,” Sanchez told Gotham Gazette. “They are more comfortable with a candidate that supports the status quo as opposed to someone who will challenge and defend the needs of our district.” She further stated that she will “never owe anyone anything.” She did not provide specifics about how she would seek to shift the status quo.

While Cho has brought in large amounts of campaign money, much of it comes from outside the city, per filings. Obama advisor and CNN personality David Axelrod headlined a recent fundraiser for Cho, and Cho has received backing from other former Obama staff such as former Education Secretary Arne Duncan and actor-turned-public engagement director Kal Penn.

Despite high profile boosters, Cho says he intends to energize the grassroots of the district to overcome a rival with larger local institutional support and a district network. He says that his conversations with his neighbors have led him to the conclusion that “institutional, establishment politics is not serving them very well,” drawing a contrast with Rivera and Mendez, the current officeholder.

A source close to Rivera disagreed, saying that the claim of Rivera being the establishment candidate doesn’t hold up when put against those backing Cho, the so-called “creme de la creme Democratic establishment.”

Cho claims that his experience working in the federal government, specifically in voter outreach, has prepared him to serve as a local legislator.

“I’ve learned from the very best on how government should interact with its people,” Cho told Gotham Gazette, highlighting Obama’s insistence that government be a “force for good in people’s lives.” He also claims that seeing the Affordable Care Act passed while dealing with a hostile Congress has prepared him to challenge Mayor de Blasio when necessary if he is a member of the city’s legislative body.

Like Rivera, Cho admonished the situation at Masaryk Towers as a failure of leadership, characterizing the gas shutoff as emblematic of people’s declining trust in government, and of the city failing to deliver and live up to its progressive reputation.

“It’s insane to me that six weeks is something that they would even think is acceptable in any way,” he said. “This is what happens when you don’t have people who are willing to stand up against these interests and these groups and these powerful entities. So they think ‘oh, six weeks? Let’s do it. Nothing’s gonna happen, they haven’t punished us before, they’ve never challenged us before, so we can get away with that.’ And that just feeds into, I think, the hopelessness that people have around who’s looking out for them. Who’s fighting for me? Is there anyone that actually cares and who’s going to push back and make sure this doesn’t happen again? And right now we have a historic high in terms of lack of faith in institutions. This kind of stuff does not change the trendline.”

The only other candidate who has raised funds in the ballpark of Rivera and Cho is Silver, a member of Community Board 6 and an attorney, who has raised a little over $90,000 per the latest campaign filing with the CFB. Like her opponents, she couched criticism of Rivera into her acknowledgement of the tough road ahead.

Vasquez has raised about $41,000, with public matching funds expected on top of that, and told Gotham Gazette that he acquired four times the required petition signatures.

“No one has been able to do what I’ve done, and the majority of my money is all New York City. A lot of it is in-district,” Vasquez told Gotham Gazette in an interview, referring to the large proportion of donations to other candidates that came from outside the district and the city. Vasquez said that in the Council, he wouldn’t necessarily take on the role of writing new legislation, but rather “using the legislation that we already have” to advocate on behalf of his constituents. He has made disability rights a centerpiece of his campaign, arguing that inadequate facilities for those with disabilities are blocking them from such things as affordable housing and even the right to vote.

Silver was also optimistic. “I knew when I joined this race that it would be a challenge,” Silver told Gotham Gazette. “Incumbents and political staffers are often heavily favored in City Council races.” She pointed out that most of the “open” seat City Council races, where the officeholder is term-limited, include at least one political staffer in the running. Silver still believes that she can win the election.

Silver, like the other candidates, told Gotham Gazette that affordability is the “overarching” issue in the district, but she has also made strengthening public education a centerpiece of her campaign. She says that “teachers and principals have asked me to run because our public schools need a champion in City Hall.” She identifies herself as an education advocate, citing having “raised over $3 million for New York City public schools, identified new school sites to ease overcrowding, and championed equity and excellence in our schools.”

Rivera responded to the criticisms of being the “establishment” candidate in a statement to Gotham Gazette.

“As the youngest person running in this race, I bring a fresh perspective to the Council that is informed by the generations of organizers before me. My track record and the experience I gained working with Council Member Mendez has helped me build strong relationships at all levels of government that will allow me to get right to work in the Council. If this is establishment, then I thank them for recognizing my work.”