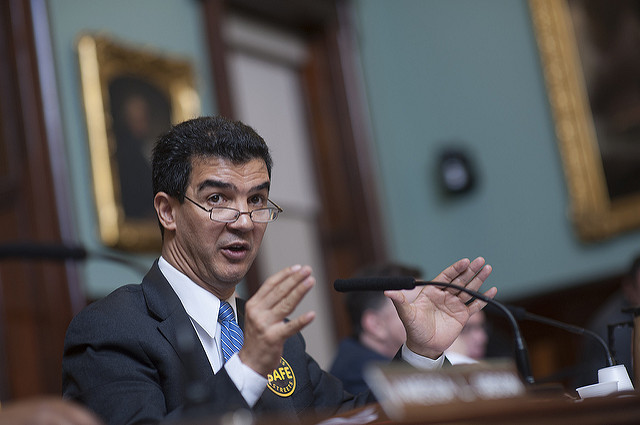 At a contentious hours-long hearing held on Tuesday by the the City Council’s Committee on Transportation, Council members grilled representatives of the Metropolitan Transportation Authority (MTA) on the problems facing the city’s transit infrastructure and the challenges of finding both short- and long-term funding streams to adequately maintain and upgrade the city’s subway system.

The hearing comes amid an increasingly testy fight between the city and state over the MTA’s recently announced $836 million rescue plan for the crisis affecting the city’s subways. MTA Chair Joe Lhota, recently appointed by Governor Andrew Cuomo, has insisted that the city provide $456 million for the emergency upgrade plan to stabilize the system over the next year. Mayor Bill de Blasio has refused to bear those costs, pointing to an equal amount of city-issued funds that have been diverted since 2011 by the state from their intended use in MTA operations. De Blasio on Monday proposed increasing taxes on the wealthy to fund the MTA, but the proposal was quickly dismissed by state Senate Republicans who would have to approve it.

Tuesday’s hearing kicked off with testimony from MTA Managing Director Veronique Hakim, Management and Budget Director Doug Johnson, and New York City Transit Authority Executive Vice President Tim Mulligan. The three fielded questions from members of the transportation committee, Council Speaker Melissa Mark-Viverito and Public Advocate Letitia James. Council members largely focused on the costs of modernizing the subway system as well as accessibility issues, but were routinely frustrated by the inability of the MTA representatives to delineate specific figures such as the costs of tunnel construction per mile or of installing elevators at subway stations.

Council Speaker Melissa Mark-Viverito emphasized that the city is already providing ample funds to the MTA and bristled at the suggestion that it was shirking its responsibility to fund the agency. “I understand the MTA is a creature of the state and therefore you respond to the governor, but to make it seem that the governor is being so magnanimous and that this city is rejecting its responsibility, I'm not going to sit here and accept that,” she said.

MTA budget director Johnson later attempted to clarify that the $456 million in MTA operating funds from the city, which Mayor de Blasio claims have been diverted elsewhere by the state, were in fact shifted to the MTA’s capital plan and were a form of “relief” for the operating budget.

Mark-Viverito also sought answers on how the MTA prioritized capital projects and controlled costs. “The cost of building subway tunnels in other cities is between $200 million and $1 billion per mile; when we were in phase one of the second avenue subway that cost was approximately $2.3 billion per mile,” Mark-Viverito said, asking MTA’s Hakim what led to the discrepancy.

Hakim pointed out that the city poses its own unique challenges, both physical and regulatory, for infrastructure upgrades. “In other parts of the globe, when subway systems are being built or expanded, they do not remotely come close to the challenges that we face here in New York City,” she said. “You see it when you go by a utility construction pit and you look and are amazed at the spaghetti of utilities you have to deal with underground.”

Mark-Viverito seemed dissatisfied with the response, and emphasized that she was “very disappointed that Chairman Lhota is not here himself, especially considering the significant amount of money he has asked the City to contribute to the MTA’s plan.” Later, when asked by reporters about Lhota’s absence, she said, “I do find it disrespectful.”

Council Member Ydanis Rodriguez, the chair of the committee, recounted his recent experiences on a listening tour on the subways, totalling 24 hours over two days, organized by him and State Assemblymember Jeffrey Dinowitz. Numerous elected officials participated in the tour to hear from subway riders, and the results of their survey were released at a news conference Tuesday morning. They found that about 75 percent of nearly two thousand riders they spoke to had been late to school, work or an appointment in the last two weeks. “While less a concern for us, this is part of the reality subway riders face every day,” said Rodriguez, before suggesting that the MTA should spend the “enormous amount of money it does have intelligently, quickly, and efficiently.”

Council members also pushed the agency on the issue of accessibility at subway stations, prompted by an early interruption from a member of the public who pointed out that the panel had not touched on accessibility for the disabled or elderly. “All these plans mean nothing to us if you can't get on the train,” the woman, who was on a mobility scooter, said. Later, Mark-Viverito noted that the Council “usually do not acknowledge and do not accept disruptions in this chamber,” but she thanked the woman and said the issue of disability ridership was legitimate and should be addressed by the MTA.

Asked whether the planned 15-month L train shutdown, scheduled for 2019 to fix damage caused by Hurricane Sandy, would be a good time to install elevators, Hakim said the cost would be prohibitive.

“At this rate we'll have every station accessible by 2450,” lamented Council Member Stephen Levin, who criticized the MTA for using what he called “small-bore” solutions as opposed to big-picture thinking. Referring to Governor Cuomo’s late-June declaration of a state of emergency for the MTA, he added, “We need the MTA to use that power of that state of emergency to truly make an impact.”

Several Council members were skeptical of the MTA’s ability to manage any funding that could be provided by the city. Council Member Chaim Deutsch criticized the agency for its lack of transparency and it’s inefficiency in spending. “You guys do not know how to spend a dime, how could you spend a billion dollars?” Deutsch asked, before calling the inaccessibility of the subways “unacceptable.”

Only Council Member Rory Lancman, a vocal critic of Mayor de Blasio and his administration, seemed somewhat sympathetic to the MTA’s position. “Is it fair to say that the state's contribution to the MTA capital, for not just this capital plan, but the last two capital plans as well, dwarfs the contribution that the city makes to the capital plan?” he asked, with the MTA representatives readily agreeing. He also suggested that the mayor’s appointees to the MTA board – the mayor chooses four voting members out of the total fourteen, while the governor selects six – had not put forth any plans to improve the city’s subways.

In large part, the Council members seemed to want to avoid an outcome predicted by Comptroller Scott Stringer, who said in his testimony, “I’m concerned that you give money to the MTA black hole and you never see it again.” He reiterated his support for a $3.5 billion bond act to relieve some pressure on the MTA issuing and repaying debt. “As we take the time to consider the menu of long-term funding options, we must ensure that those who are actually paying for transit improvements see an equitable, fair return on their investment,” he said.

Polly Trottenberg, Commissioner of the city’s Department of Transportation, and Dean Fuleihan, the director of the Office of Management and Budget, also testified, outlining a concern for permanent funding sources for new initiatives, such as the estimated $300 million that it would cost annually to fill the 2,700 new positions that the MTA’s emergency action plan intends to create.

“At present, the MTA has not identified a way to cover those recurring operating costs,” Trottenberg said.