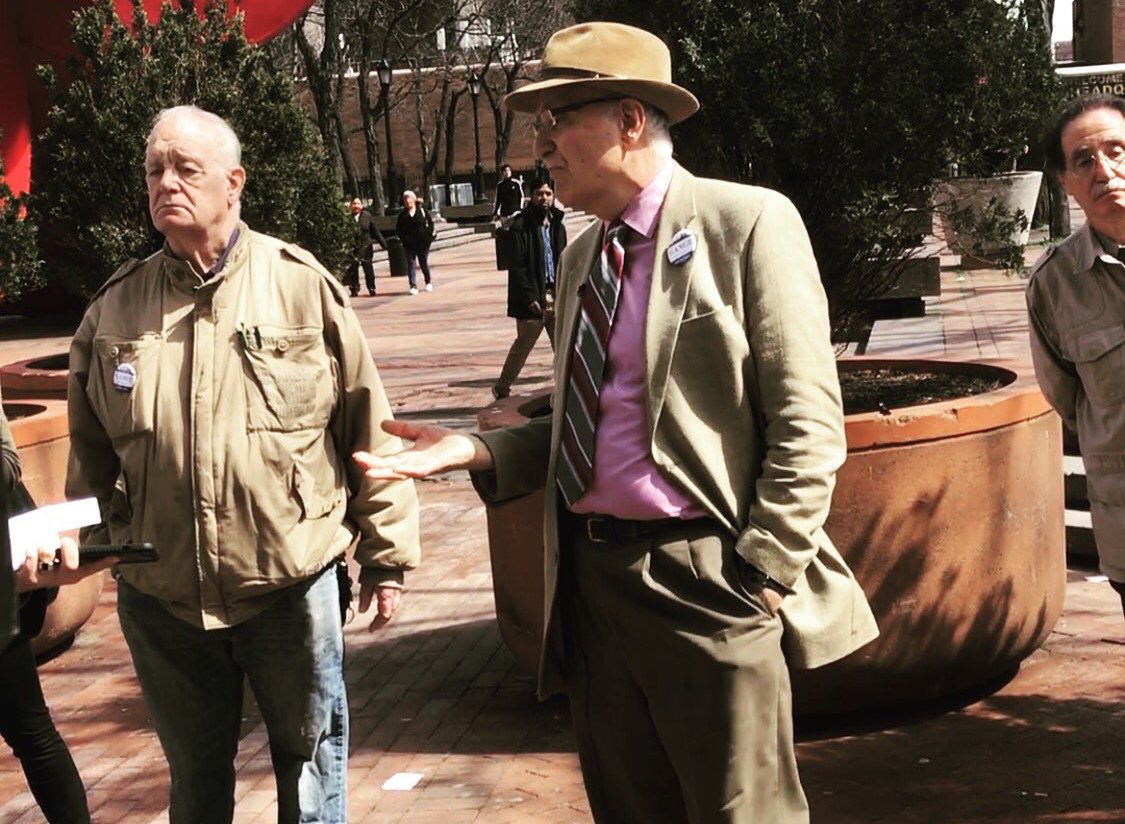 The first official debate in the Democratic mayoral primary is set for Wednesday, August 23, where Mayor Bill de Blasio will face former City Council Member Sal Albanese. But three more Democrats, all of whom will be on the September 12 ballot, failed to qualify for the debate and are crying foul that the Campaign Finance Board’s eligibility criteria are excluding them from participation.

For candidates to qualify for the first of two official CFB primary debates, they must have raised and spent at least $174,225, which is 2.5 percent of the $6,969,000 primary expenditure limit.

For the second “leading contenders” debate, for Democrats on September 6, a candidate must meet the fundraising and expenditure threshold as well as one of three additional criteria. These include an endorsement from a citywide, statewide or federal elected official who represents the area covered by the election; or an endorsement from a organization with 250 members; or “significant media exposure” in the 12 months before the election, defined in this case as 12 appearances in print, television, digital, or other local media.

Only de Blasio and Albanese have met the criteria for both primary debates. As of the latest filing, for mid-August, de Blasio has raised $4.8 million and spent $2.4 million, and recently received a public funds matching payment of $2.5 million, giving him $4.9 million in cash on hand. Albanese has raised just over $191,000 and spent $185,000, leaving just over $5,000 in his campaign account as of the filing. He has not yet qualified for matching funds.

Candidates who participate in the CFB’s public matching funds program must appear in the debates if they qualify. For non-participants, inclusion in the debates is not guaranteed, the debate sponsors can choose to invite them.

The three other Democratic candidates on the ballot -- attorney Richard Bashner, police reform advocate Robert Gangi, and tech entrepreneur Michael Tolkin -- did not meet the threshold for the first primary debate. Both Bashner and Gangi have struggled to raise the necessary funds; Tolkin is the sole candidate of the bunch to not participate in the public funds program and would need to be invited on to the debate stage by sponsors.

Bashner, Gangi, and Tolkin are all protesting the CFB requirements and the fact that they will be on the outside looking in when de Blasio and Albanese face off. Even Albanese has criticized the requirements, which he barely met after a furious spending spree, and made an argument for a different threshold.

In the 2013 Democratic mayoral primary, the debate thresholds were far lower: candidates had to raise and spend $50,000 but they also had to have received 2 percent in either a Quinnipiac University Poll or Marist Poll. Those thresholds were changed late last year through legislation passed by the City Council -- sponsored by Council Member Ben Kallos, chair of the governmental operations committee -- and signed by de Blasio that increased the debate standards to the current 2.5 percent of the expenditure limit, as well as disqualifying loans or outstanding liabilities as counting towards that expenditure.

The bill was based on one of 14 recommendations by the CFB in its 2013 post-election report, which pointed out that debate thresholds had remained unchanged since 2005 while expenditure limits had increased more than 20 percent. “An increased standard, tied to the expenditure limit, is a better objective indicator of viability,” the report stated, recommending the increase.

Bashner has taken particular issue with the bill, insisting that it was a conflict for Mayor de Blasio to sign it into law since it has largely benefited him. The Brooklyn-based attorney and community board member has raised about $118,785 and spent $104,000, but $50,000 in contributions were a personal loan he made to his campaign.

In a letter to the CFB on Monday, Bashner called the bill that changed the debate law the “Incumbent Protection Act” and called on the board to allow all the mayor’s challengers to participate in the debates. At the very least, he argued, those who have met the 2013 threshold of $50,000 should be included. “Voters deserve the opportunity to hear where each of these challengers stands on the critical issues facing our city,” he wrote. “To silence the voices of these candidates is to impede democracy.”

Council Member Kallos defended the legislation, saying the CFB’s recommendation to increase the threshold was a “reasonable” one. “The piece that I found to be important was that candidates had to actually be spending money towards winning an election and that loans and liabilities wouldn’t count,” he said in a phone interview, insisting that the effect was two-fold. “Wealthy people couldn’t just write themselves a loan that they intended to pay back fully,” to get into the debates. “It also just changes it from a situation where people could loan and spend money that was illusory as opposed to raising and spending actual dollars.”

At one point, it did seem that de Blasio would commit to an open debate with his opponents. He initially seemed reluctant, insisting in a July interview on NY1, “We’re going to follow the CFB rules.” None of his opponents had qualified for the debates by then. The mayor then changed his position, saying in an August 3 tweet, “Regardless of CFB requirements, I'll be on a debate stage before the Sept 12th primary.”

Albanese criticized the mayor’s flip-flop, saying de Blasio issued the statement “when he saw that I was gonna blow past the threshold.” “I don’t find that to be a good government position, it was more of a political, expedient position,” he added.

It’s unclear if the mayor will end up debating all the candidates on the ballot. "Under Mayor de Blasio crime is at record lows, jobs are at record highs, and New York City is building affordable housing at a record pace. We are happy for any opportunity to talk about the Mayor’s record and we look forward to debating whoever the CFB and debate sponsors decide to include,” said Dan Levitan, a spokesperson for de Blasio's campaign, in an email.

Gangi and Tolkin have directed their ire more towards the CFB, taking turns to condemn the debate requirements and the board itself.

"The CFB's decision is a disgrace,” Tolkin said in a statement Tuesday. “It is reflective of a system virtually designed to keep non-politicians out of the election process. We are studying this decision closely and considering a range of options; however, it is clear that a comprehensive review of the CFB’s decision-making process is long overdue.”

Tolkin has taken a peculiar approach to his campaign finances, showing almost $8 million in personal in-kind contributions to his campaign, which are also counted as expenditures. But the CFB determined that those did not qualify him for the debate. Nevertheless, Tolkin challenged de Blasio to participate in three additional debates before the primary with all the Democratic candidates. “Mayor de Blasio’s unwillingness to participate in debates with the full slate of candidates is an obstruction to a fair and transparent primary process - one that he was afforded as a candidate in 2013,” he said.

For Gangi, campaign fundraising has been an even bigger challenge. He has raised only about $88,000 and spent just over $75,000. But, like Bashner, he lent his campaign a significant sum, $74,000, which would not count towards the contribution limit for the debates.

In a campaign statement on Tuesday, Gangi said the financial thresholds “are inherently unfair and undemocratic” by favoring wealthy candidates and incumbents with access to deep-pocketed donors. He was particularly incensed that he had been excluded after the CFB had issued public funds to de Blasio’s campaign partly based on a de Blasio campaign “statement of need” that pointed to Gangi as one of the mayor’s main competitors. “On what basis does the CFB then decide that de Blasio does not have to debate me?” he wondered.

“If my campaign is part of the rationale for granting the Mayor an extra [$2.5] million in tax payer [sic] matching funds, then it should have sufficient standing to earn a seat at the debate table,” he added.

CFB spokesperson Matt Sollars said in an email that the new thresholds were adopted in advance so all candidates would be aware of them. “City law sets objective, nonpartisan criteria for eligibility to participate in the citywide debates,” he said. “These criteria ensure that voters get a robust debate among candidates who have demonstrated public support.”