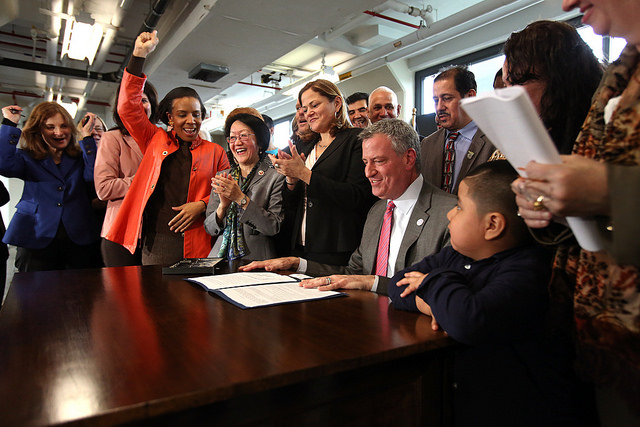 As she seeks re-election, City Council Member Laurie Cumbo has key advantages that come with incumbency -- name recognition, access to donors, and a degree of institutional support. Included in that support is the backing of Mayor Bill de Blasio, a fellow Democrat also running for a second term this fall, though the mayor and his team appear to be helping Cumbo quietly, in part because of the complicated politics surrounding a key issue in her district, the redevelopment of the vacant Bedford Union Armory.

Politico New York recently reported that the mayor’s team has thrown its weight behind Cumbo’s campaign, aiming to ensure that the key rezoning effort in her district is successful. As reported, the effort raises questions about potential violations of the city’s Conflicts of Interest law and rules governing campaign activities by city officials, but both the de Blasio and Cumbo camps have been tight-lipped about the mutually beneficial arrangement.

In the August 10 report, Politico New York’s Sally Goldenberg, citing more than a dozen sources, detailed efforts by de Blasio’s close associates to bolster Cumbo, who is facing a tough primary challenge from Ede Fox. Goldenberg noted that the city's Office of Intergovernmental Affairs, which is run by former de Blasio campaign operative Emma Wolfe, has organized volunteers for Cumbo’s campaign and arranged for them to hire an aide from the office of Council Member Julissa Ferreras-Copeland. They also urged unions to back Cumbo and expressed the importance of the race to the Working Families Party, which has decided not to make an endorsement. “High-ranking de Blasio staffers have offered the Cumbo campaign operational advice,” Goldenberg wrote, “and are prepared to provide more assistance as the primary nears, the sources said.”

As Gotham Gazette sought to clarify what campaign help was being provided to Cumbo by City Hall, perhaps blurring or crossing lines meant to separate government and political work, the response was silence. Mayoral spokesperson Eric Phillips refused to comment, as did a spokesperson for Cumbo’s campaign. De Blasio’s own reelection campaign did not respond to a request for comment.

Over the years, the city’s Conflicts of Interest Board has issued numerous advisory opinions on the restrictions on political activity by public servants. Perhaps one of the most pertinent, from 2012, prohibits city employees from working on political campaigns on city time or with city resources.

In the most recent advisory, issued August 17, the Board noted the general intent of the law as it pertains to political campaigns. “Certain principles run consistently through each of these Advisory Opinions: while public servants may engage in many political activities, they must keep those activities separate from their official City duties,” the advisory reads. “This means, most significantly, that public servants may not use their City positions to benefit a political campaign, and they may not use any City time or resources for campaign-related activities.”

The COIB does not comment on potential violations, each of which can carry a civil penalty of $25,000 for an erring public servant. Officials can also be fired, suspended, or lose vacation days if their employing agency deems it appropriate.

The Office of Intergovernmental Affairs interceding in a City Council election could violate that basic principle. “The real issue is, are they accounting for their time properly?” wondered Blair Horner, executive director of the New York Public Interest Research Group, a government reform organization. “Are they using their powers responsibly?”

Horner said it wasn’t unusual or inappropriate for the mayor to wield his political clout in another elected official’s favor. “It’s not unheard of for an executive to use their political muscle to help legislative candidates,” he said. Indeed, the mayor has attempted to use his influence in the past to try to sway state Senate elections towards Democrats in 2014. “What would be inappropriate is using the public office for partisan advantage,” Horner said.

At the core of de Blasio’s support for Cumbo is the Bedford Union Armory project, a proposal to turn the 138,000-square-foot facility in Crown Heights into a mixed-use development with affordable and market-rate housing, condos, and a state-of-the-art recreation center. The project has become the burning issue of the District 35 race, creating space for Fox to challenge Cumbo in the primary and bringing increased attention to the de Blasio administration’s rezoning efforts that have been unpopular with communities fearing displacement and gentrification. Cumbo only came out against the project after months of delay, during which Fox painted her as a real-estate-friendly elected official who had betrayed her community. (De Blasio’s City Hall and Cumbo have also been largely aligned on other matters over the course of the term.)

Fox said she wasn’t perturbed by de Blasio’s unseen support for Cumbo. “I think that Laurie Cumbo is aware she’s in a very competitive race and is looking for all the support she can get,” Fox said in a phone interview.

Although Fox recognizes that she’s at a disadvantage running against an incumbent, she said she isn’t deterred. “I knew going in that I was not going to get much institutional support so this is no surprise,” she said. “I knew the power of incumbency. I was expecting and preparing for it.”

She has been particularly skeptical about Cumbo’s opposition to the Bedford Armory project, and worries that Cumbo may give in to the administration’s preferences if she wins the primary election on September 12. “I think that is a very real question,” she said, “and I think voters are weighing whether they can trust their representative given her long-standing support for the project. The language I’ve heard from her has not made it very clear that she’s standing against the project as a whole.”

Come primary election day, in a district where some residents are up in arms about the de Blasio administration’s housing and economic development policies, Cumbo’s ties to the mayor and his team may be her undoing. “Ultimately, the voters will decide if it’s a good or bad idea,” said NYPIRG’s Horner.