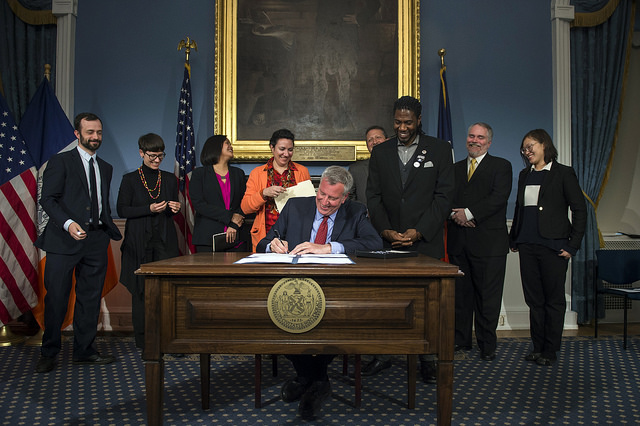 A police oversight bill sponsored by City Council Member Jumaane Williams unanimously sailed through the Council’s Committee on Oversight and Investigations on Tuesday, and is all but certain to be voted through the full City Council on Thursday. The legislation, which increases reporting requirements about and efforts to mitigate police misconduct, has the support of the de Blasio administration, but is being opposed and criticized by the city’s largest police union.

The bill requires aggregation of public data regarding litigation in state and federal courts against the NYPD and individual officers into a report to the Comptroller, the Civilian Complaint Review Board, the NYPD, and the Commission to Combat Police Corruption, after which the NYPD Inspector General must use the data to make recommendations regarding training and disciplining of officers and the department.

“The legislative process has been very valuable and very long,” said Williams in his opening statement at Tuesday’s committee vote, which was 4-0 (the other three members of the committee were absent). “But we received a lot of information. We got information about transparency issues. This is not about making police officers look bad. We are trying to find ways to make the department better.”

Vincent Gentile, the committee chair, echoed Williams’ sentiments, stating that there was “no negative intent” to the bill despite what opponents might say. After passing committee, the bill is set for a vote of the full 51-seat City Council on Thursday.

The legislation is seeing last minute opposition from the Patrolmen’s Benevolent Association (PBA), the main union representing uniformed police officers in the city. In written testimony submitted to the committee in advance of Tuesday’s vote, the PBA questioned the intention of the bill and stated that the increased transparency would prove harmful to the department, individual officers, and the city overall.

“The “evaluation” contemplated by this legislation is apparently designed to reach a foregone conclusion — that New York City police officers engage in widespread, willful violations New Yorkers’ rights, and that the NYPD’s leadership is incapable of performing the disciplinary and governance duties assigned to it by the City Charter — that is not supported by any available evidence,” reads the testimony. “In this effort, the legislation would do significant harm to police officers’ reputations and due process rights by substituting mere allegations of misconduct for proof of the same. Moreover, by highlighting and publicizing those allegations for the benefit of entities that profit from the harassment and denigration of police officers, this legislation would undermine the NYPD’s governance and operations and diminish public safety for the City as a whole.”

The union also alleges that the legislation is explicitly designed to hurt police officers, and to serve an ideological agenda rather than to increase accountability, which it claims is already up to par.

“Far from seeking correcting the injustices in the existing system, this legislation amounts to an indictment of the NYPD’s leadership and its disciplinary policies for failing to produce a desired or expected outcome: the punishment of as many police officers possible, as harshly as possible, regardless of the merits of the allegations they face.”

The union also argues that the aggregation of public data into a single report “serves no purpose other than as a tool of convenience for the lucrative plaintiffs’ bar that profits from the filing of specious claims of police misconduct.”

The PBA provided only written testimony; no one spoke gave oral testimony to the Council committee.

Williams, who in an interview with Gotham Gazette for a previous article stated that the department has a woeful record on transparency and accountability, had choice words for the union at the hearing.

“There have been two hearings on this bill, the PBA hasn’t come to either one,” said Williams. “They haven’t provided any testimony, except for right now. And I know many of my colleagues have received some calls from the PBA telling them to oppose this.”

“I have never seen one piece of legislation that deals with policing that the PBA has supported,” he continued. “And they very rarely, if ever, engage in any discussion around these bills. They simply say no.”

Williams has bluntly criticized the PBA before. In 2014, he accused the union of lying to the public in order to foment “mass hysteria.” He has accused the PBA of failing to engage in “productive discussion” with the Council and reform advocates regarding Williams most controversial policing-related legislation, the 2013 Community Safety Act that created the NYPD IG and new prohibitions around racial profiling. The legislation, in part a response to the NYPD’s excessive use of stop-and-frisk policing, was passed by the Council over a veto by Mayor Michael Bloomberg.

PBA sources told Gotham Gazette that Williams wasn’t telling the whole story about the bill currently at hand. “This is a policing bill without the input of the police. They had a hearing 17 months ago and made no effort to contact us or get our feedback ever since that hearing.”

Meanwhile, the legislation has moved ahead with the support from the de Blasio administration, which indicated it helped shape the final product of a bill that has been around for several years, since Williams first introduced it.

"We're proud to have worked on this legislation with our partners in the Council as part of the Administration's broader effort to bring greater transparency to how our City is policed and continue to build trust between law enforcement and the communities they serve and protect,” said Austin Finan, a spokesperson for Mayor Bill de Blasio. Changes to the bill indicate that the administration reduced some of the reporting requirements in negotiations with the Council.